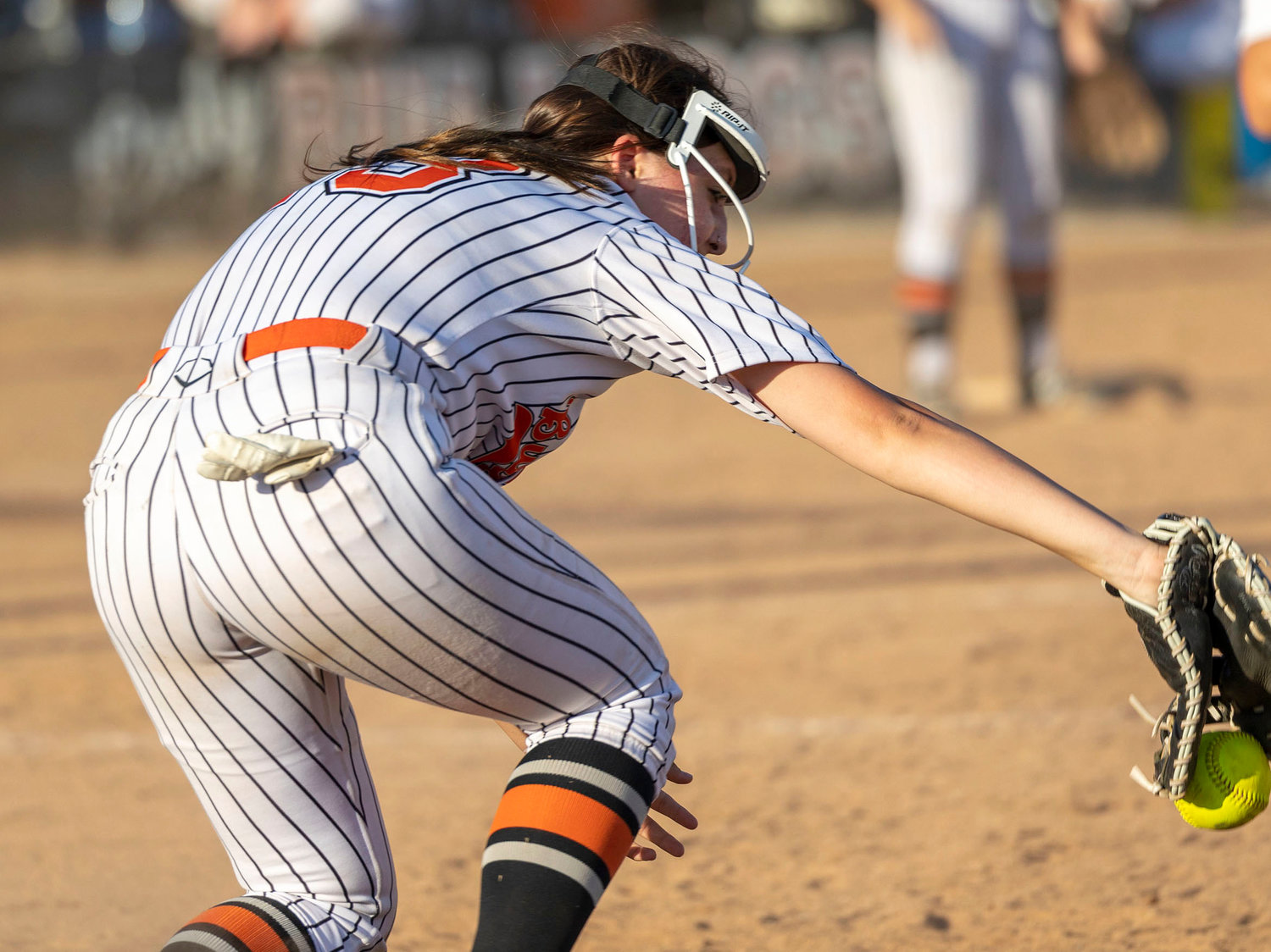 Wayne sophomore Brysten Shephard squeezes the ball to secure the out. The Bulldogs were defeated 12-0 by Vanoss in the District tournament, ending their season.
Greg Gaston - double g images
Posted Thursday, September 29, 2022 9:00 am
Emily Montgomery

Last Thursday Wayne picked up wins over Velma-Alma, 18-17, and Vanoss, 12-7, to move on to Friday. Host Vanoss had to beat Wayne twice to move on to Regionals.

And they did. The Lady Wolves beat Wayne 4-0 and 12-0 on Friday to knock the Lady Bulldogs out of postseason play.

“We struggled to hit off of their ace. She’s a lefty and threw harder than we were used to. She has a nice rise ball,” head coach Nikki Herrin said.

In Friday’s first game, Wayne had four hits, one each from Karsen Adams, Allison Ryan, Faith Brazell and Jordynn Debaets.

The Lady Wolves scored their four runs in the third inning and Wayne’s defense held them off the rest of the game.

“I’m proud of our defense. They held them most of the game and Faith got seven strikeouts.”

Vanoss ran away with it in the second game, winning 12-0.

Wayne couldn’t scratch at the plate and Vanoss was playing a great bunting game.

“We were unable to make the plays on their bunts and that helped them get base runners,” Herrin said.

Brazell toed the rubber for Wayne in the postseason and thanks to several times through the line up over the course of three games, Vanoss’s batters were seeing the ball well and getting hits off the pitcher.

In their first games on Districts, Wayne notched an 18-17 win over Velma and a 12-7 win over Vanoss.

“Velma had us down big and I’m proud of how the girls did not give up and kept chipping away. If we’d given up, we would have lost to Velma,” Herrin said.

In the win over Vanoss, the Wayne bats were red hot according to Herrin.

“They left it all on the field in the win over Velma. For so many it was a huge upset, but I knew this team had the potential. They took advantage of small mistakes and I was proud of them playing as well as I knew they could play.”

The Lady Bulldogs finish the season with a 14-11 record in head coach Herrin’s first season at the helm.

“I’m pleased with how the season went. We had tons of potential and this team played as I knew they were capable toward the end of the season.

“This is a team full of great kids with great character and that made this season fun. They are talented, coachable and they listen well.”