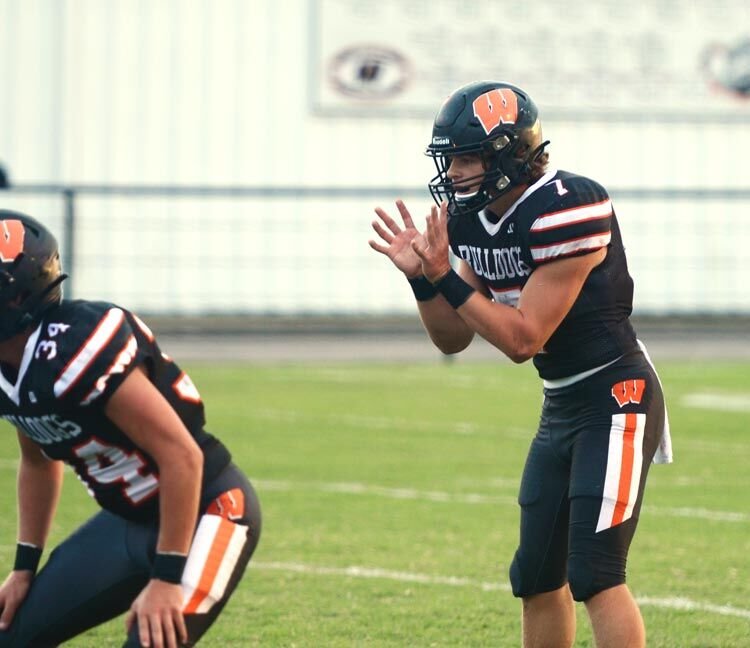 Wayne began District play on the right foot with a decisive 48-7 win over Wynnewood.

After a slow start for the Bulldogs, their offense was running on all cylinders as they ran away with the game on the legs of backfield duo Ethan Mullins and Brannon Lewelling.

“It took a little bit of time to get going,” head coach Brandon Sharp said. “We drove it on them in the first quarter but the drive sputtered inside their 20 yard line. We picked it up in the second quarter.”

Mullins started the scoring barrage in the second quarter with touchdown runs of 1, 11 and 4 yards.

Brian Ibarra was good on two of the three point after attempts – with one getting blocked by Wynnewood.

Mullins continued his scoring explosion in the third quarter on runs of 57 and 46 yards.

His sidekick, bruising running back Lewelling, added two scores of his own in the third quarter on runs of 10 and 29 yards.

Mullins finished the day with 21 rushes for 244 yards and five touchdowns while Lewelling had 20 carries for 184 yards and two touchdowns.

“The two backs carried the load for us,” Sharp said. “Everyone blocked well.”

Sharp pointed to the play of his “big eaters” for opening up running lanes for his backs.

They include Andy Lee at center, Maddox Mantooth and Billy Dodd at the guard spots and Ryan Redus and Cody Davis at tackle.

Ibarra blocked well in the game from his fullback spot, as did the receivers on the edge, according to Sharp.

“Wynnewood started stunting and bringing everybody but we continued to run the ball,” he said. “We did a really good job up front.”

Defensively Wayne shined throughout the game and didn’t allow Wynnewood to reach the end zone until the fourth quarter when the Savages connected on a 20-yard pass to their big 6’4” tight end.

The back end of the Wayne defense was tested throughout the game but answered the call.

“Their game plan was to throw the ball,” Sharp said. “They wanted to test our secondary but our kids did a really good job defending.”

The Bulldogs made life hard on the Wynnewood quarterback by getting into the backfield.

“We were able to get after him,” Sharp said. “He got rid of the ball but he was under pressure.”

Lewelling was the team leader in tackles with 10. He recorded a sack and also recovered a fumble.

Mullins registered four tackles and had a sack and Dodd recorded two tackles with two sacks.

“It’s always good to go to Wynnewood and get a win,” Sharp said.

Wayne travels to Rush Springs Friday for a showdown with the Redskins at 7 p.m.

Rush Springs is 2-2 this season and they’re coming off  two tough games, losses against Apache and Dibble.

“Rush is young but they have good players and play hard,” Sharp said.

The Redskins play out of the shotgun offensively and will run multiple sets.

“The quarterback throws well and they have two backs who can take it to the house any time,” Sharp said. “We have to cover their receivers.”

Rush Springs lines up in a 3-4 on defense with a zero technique and four techniques over the tackles.

“They slant their front and bring pressure,” Sharp said. “It’s the same defense but a different team. They seem to always be in position and they’re well coached. It will be tough on the road.”

Brannon Lewelling was his defensive player of the week nominee.

Andy Lee graded out at 80% and was the nominee for offensive lineman of the week.