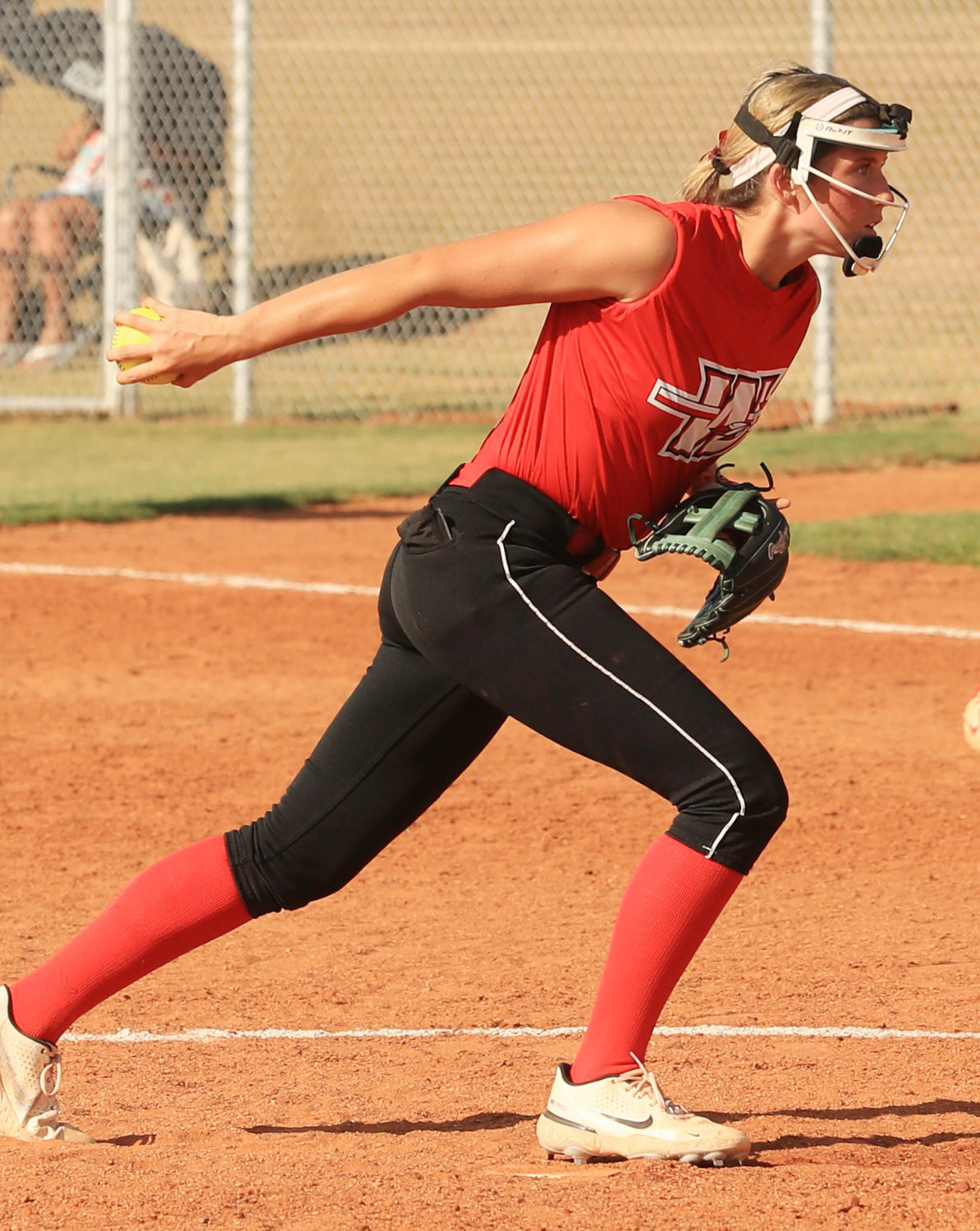 Olivia Palumbo prepares to send a pitch home for the Washington Warrior softball team. The sophomore had a successful tournament for the Warriors at Silo.
Janet Moore
Posted Thursday, September 15, 2022 9:00 am
John Denny Montgomery

The Washington fast-pitch softball team won the Silo  tournament after defeating the host 7-0 in the finals.

“It was a really strong field,” said Washington head coach Tylor Lampkin. “There were several State tournament teams there.”

Their four shutouts in the tournament were a testament to the strong pitching the Warriors have enjoyed this season.

“Maggie (Place) no-hit Silo. Any time you can no-hit that type of team you know you’re doing really well.”

Palumbo got wins against Colbert and Broken Bow.

In the two games she combined for 11 strikeouts while only allowing four hits and no earned runs.

“I was pretty happy with Maggie and Olivia’s two games,” Lampkin said.

Believe it or not, the coach thought his team was a little up and down in the tournament.

“We were game to game. We’d either not pitch as well but hit better, or not hit as well and pitch it well,” he said. “We played pretty complete games against Silo and Colbert. It was good to score (eight) runs in the short game time we had.”

Tinley Lucas had a monster tournament as the Warrior leadoff, as did fellow seniors Abby Wood and Skylar Wells.

Lampkin still wants to see improvement from his team as a whole on the offensive side of the game.

“We’re still working on consistency at the plate,” he said. “We talk about not being selfish up there and have at bats with your team in mind, not doing it just for yourself,” he said.

Washington picked up another District win against Prague on Monday. It was a 1-0 decision.

“We didn’t hit it well and Prague actually out-hit us,” Lampkin said. “We’re lucky we pitched and played defense well enough to win.”

Place got the nod in the circle, striking out eight batters while allowing three hits in the shutout.

Tinley Lucas and Emjay Lucas recorded the only hits for the Warriors. Tinley scored Washington’s only run.

Washington, now 27-2, were handed their second loss of the season Tuesday against Moore.

Untimely errors were the demise of the team and Palumbo’s outing in the circle.

“Two of the hits she gave up were three-run homers,” Lampkin said.

Wells went 3-3 and Ellie Loveless had a home run herself.