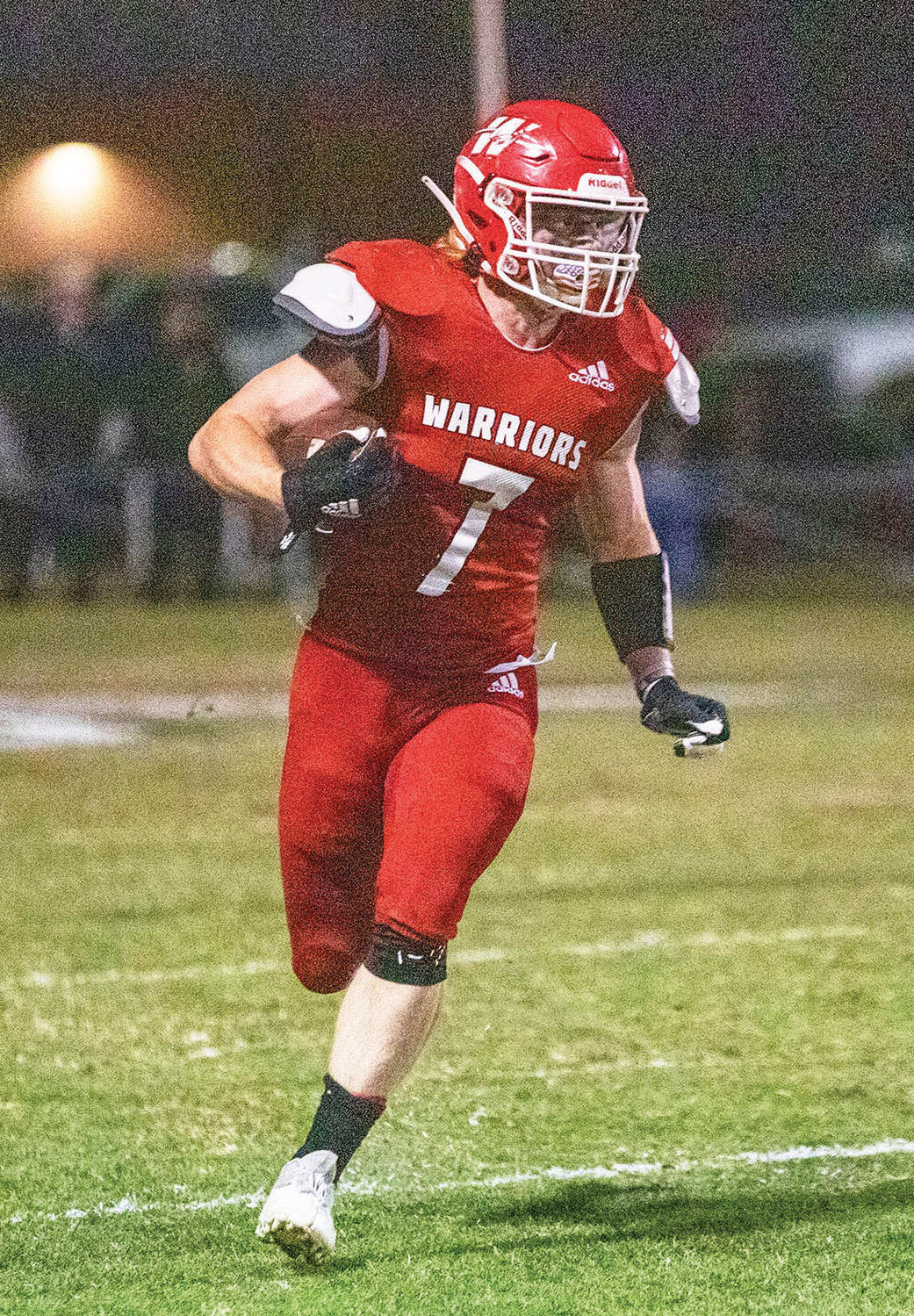 Washington junior Cole Scott rushes the football during the Warriors’ 55-20 win over Comanche in the opening round of the State playoffs. Scott led the rushing charts with 15 carries for 170 yards and a two-yard touchdown burst. The Warriors host Jones Friday night. Kickoff is at 7 p.m.
Greg Gaston - double g images 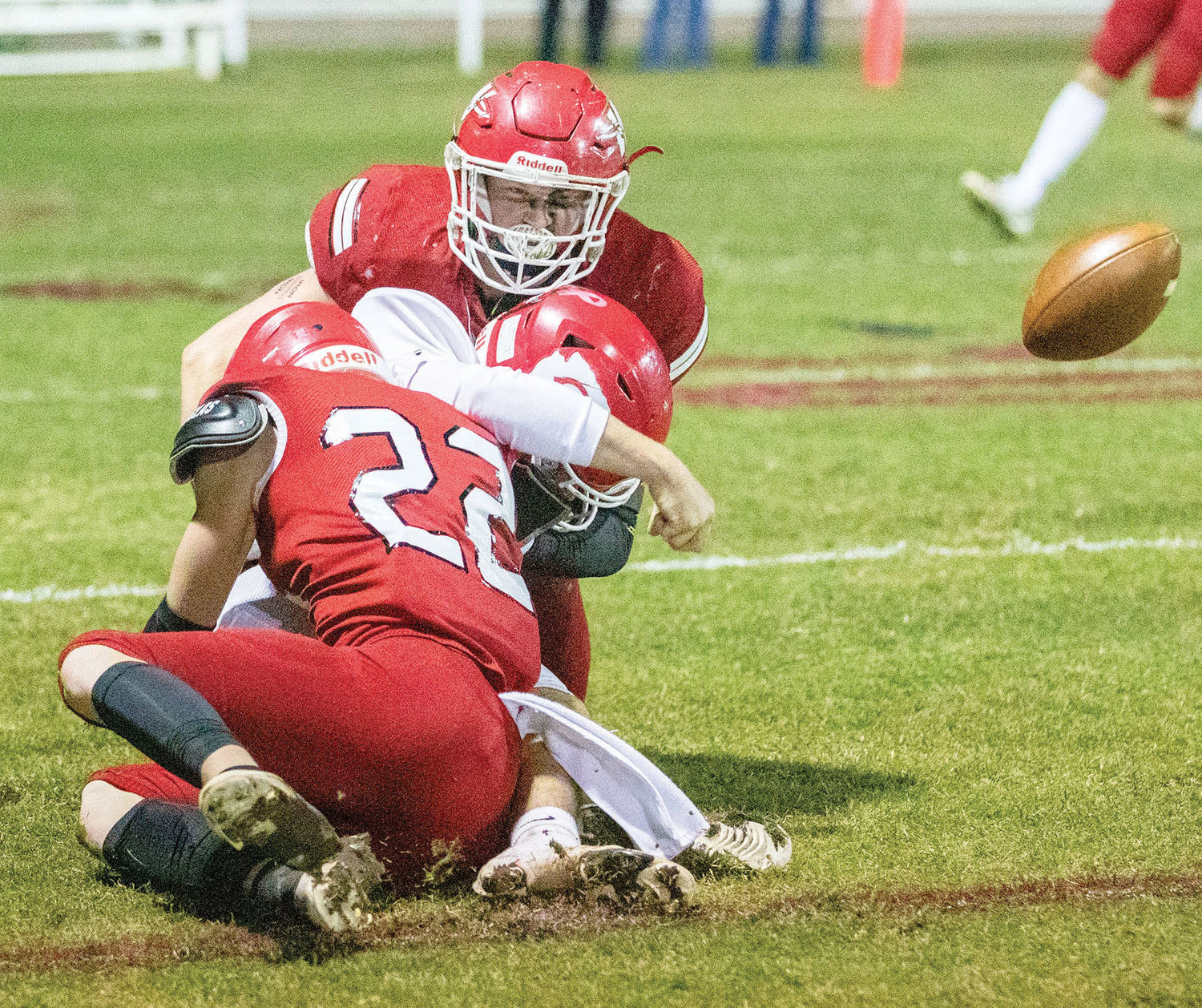 Rolling to a 42-zip lead at halftime, Washington rolled to a 55-20 playoff victory over Comanche at Reed Field last Friday night.

The No. 1 ranked Warriors came out on fire, scoring 21 points in the first quarter.

Luke Steele got the offensive attack going with a five yard run followed by a two-yard Scott touchdown. Kade Norman legged the final two yards of a drive for the third score of the period.

Norman scored on a 17 yard gallop to open the second quarter followed by two Major Cantrell touchdown passes to Kobe Scott, a 27-yarder and a 37 yard strike.

Norman got his hat-trick score on a two yard run in the third quarter and Hudson Howard closed out the scoring setting sail on a 68 yard scamper.

“I was proud of our offensive line,” head coach Brad Beller said. “They controlled the line the entire game. We started out throwing the ball really well. But once the game got to the point where we needed to closes it out running, the line did a great job of paving the way for all the running backs.”

“Week in and week out, Cole Scott does a great job running the ball. Kade Norman and freshman backup quarterback Nate Roberts ran well. We put him in the Wildcat formation and he did a good job moving the sticks.”

On the defensive side of the ball, Beller pointed to the play of his defensive backfield.

“Our front seven gets a lot of credit but the defensive backs don’t,” Beller said. “But they played a great game against Comanche.

“Comanche ran eight trick plays with double passes and except for one play our secondary did a good job of staying disciplined, staying in position to make plays while still helping in the run game.”

The coach was referring of the play of Jaxon Hendrix, Jamison Holland, Lane Steele, Kobe Scott, Luke Hendrix and Reese Stephens, who picked off an Indian pass. Jaxon Hendrix also had an interception, the coach said.

Beller said the special teams came through in the Comanche contest.

“We had good kickoff returns that gave us nice field position. Our kickoffs were much improved pinning them deep and we had some big hits. It’s always good to have that third phase of the game play well, especially in the playoffs,” Beller said.

Washington will host its second round playoff game and will welcome the Jones Longhorns to town for a 7 p.m. kickoff Friday.

The Longhorns run a spread offense with a lot of personnel groupings and formations.

Jones starts a 6’5” 230 pound quarterback that Beller compares to a young Ben Roethlisberger.

“He’s an Iowa commit and is the prototypical Big 10 quarterback,” Beller said. “We’ve seen him throw it 40-45 yards with two guys hanging on him. When Ben Roethlisberger was young that’s what he looked like. And, he has some really good playmakers to get the ball to.”

When they are on defense Jones utilizes multiple fronts and formations.

“They could be in a three, a four or a five man front and are very multiple,” Beller reports. “They will be the best front seven we’ve seen in many, many weeks. And they are very athletic in the back end.”

Jones started the season with losses to Bethany and Lincoln Christian and then with numerous injuries and their defensive coordinator in the hospital, they lost to Crossings.

“They’ve won their last five in a row,” Beller said.