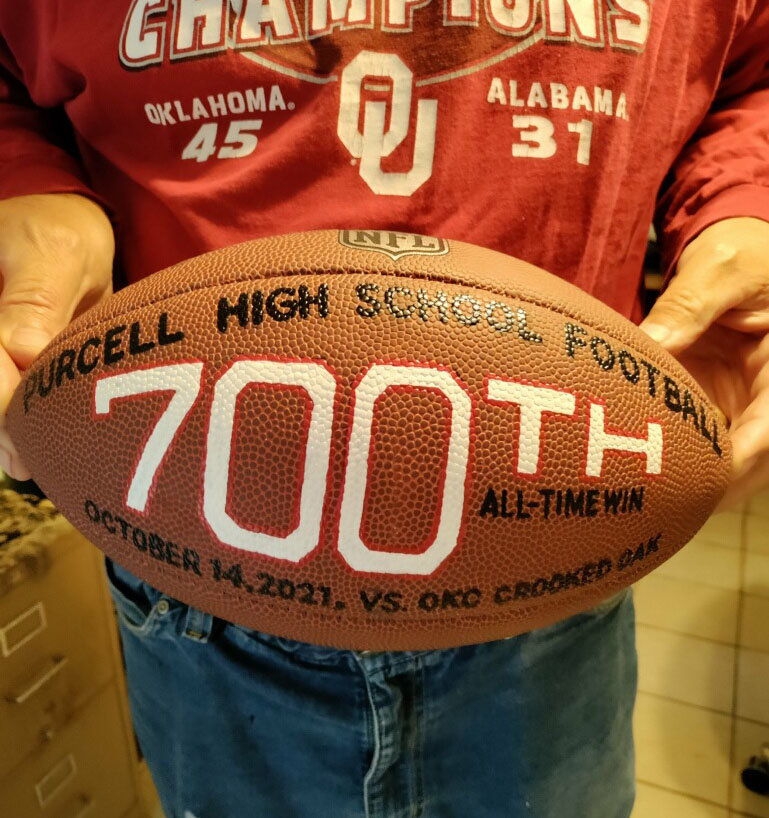 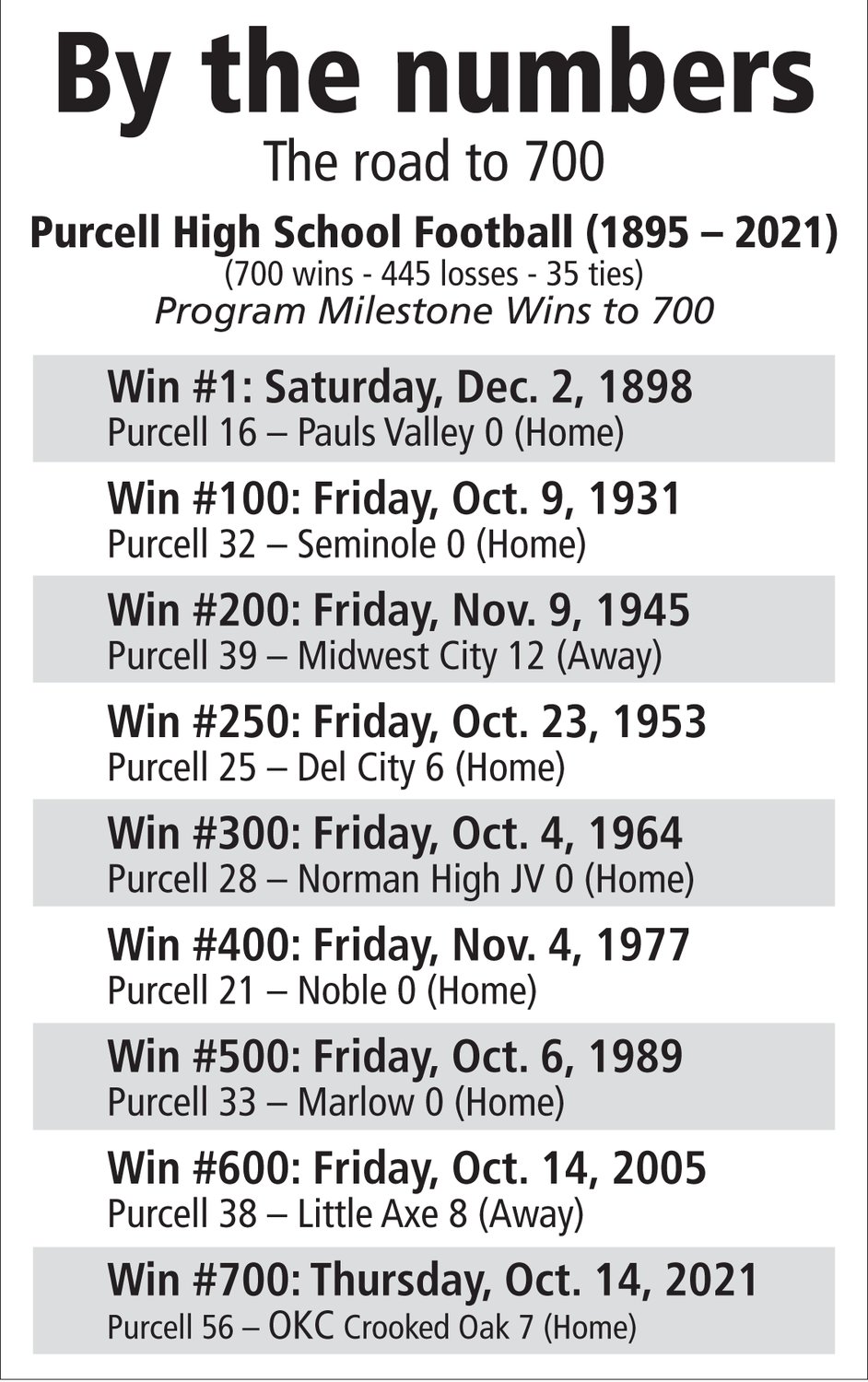 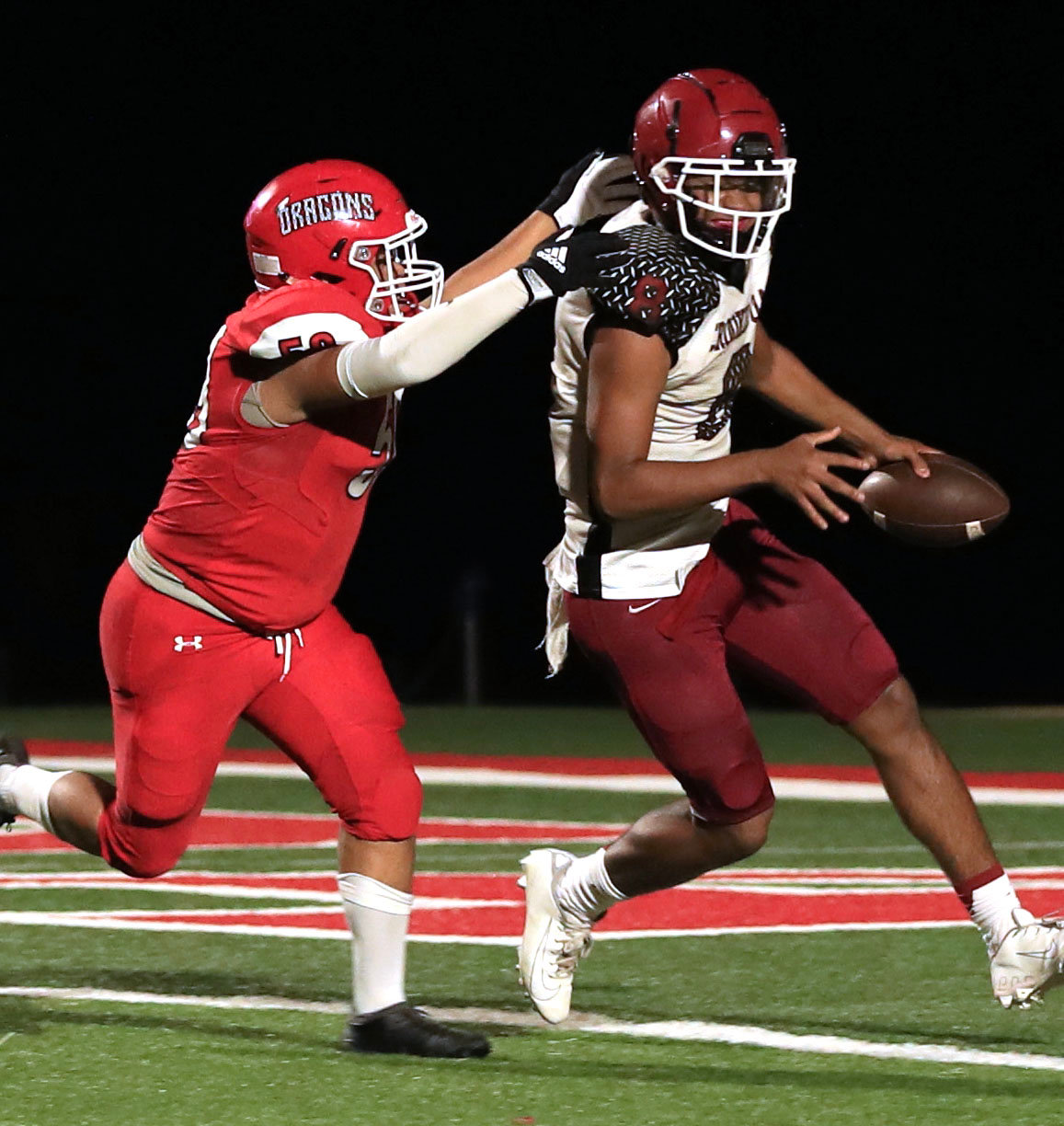 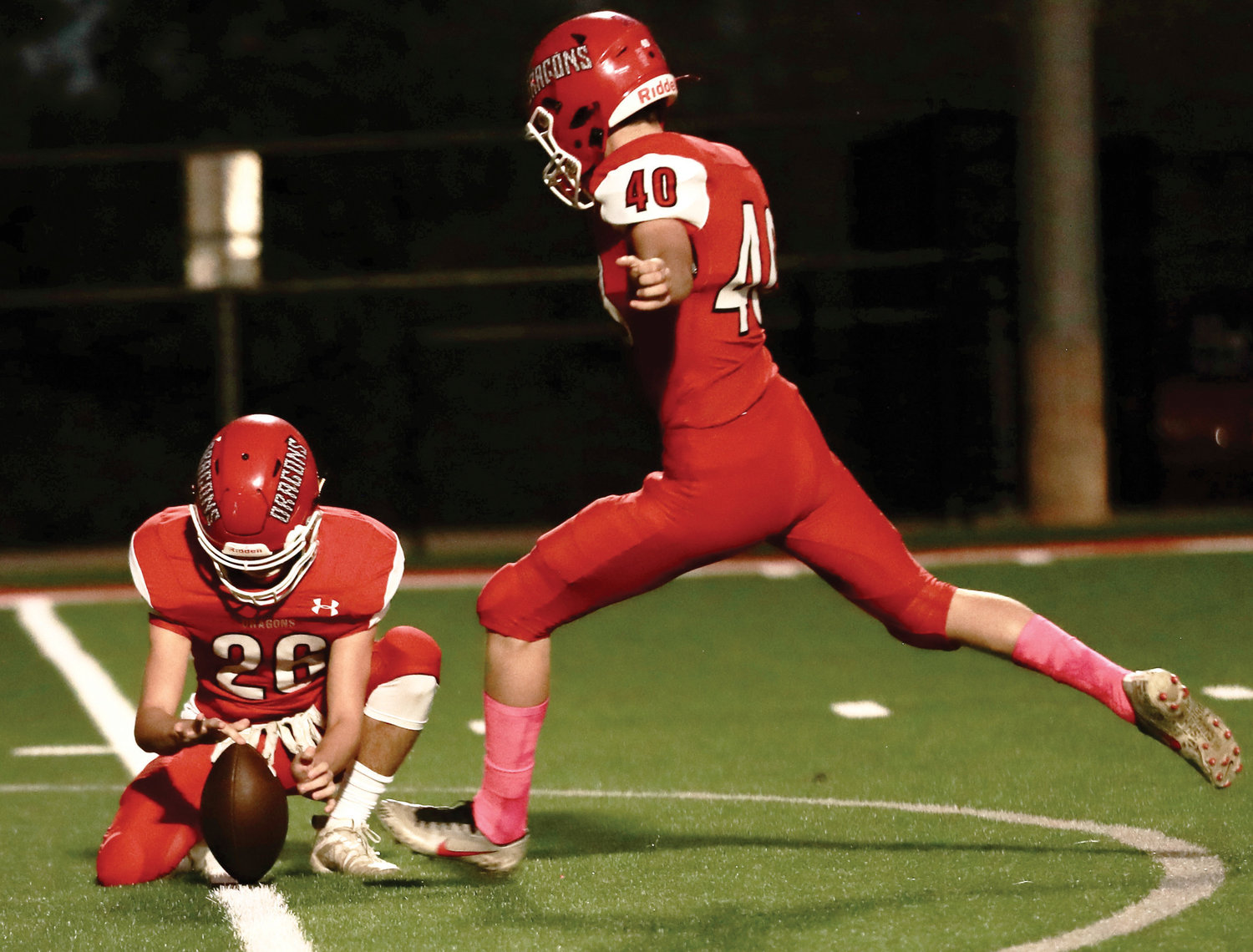 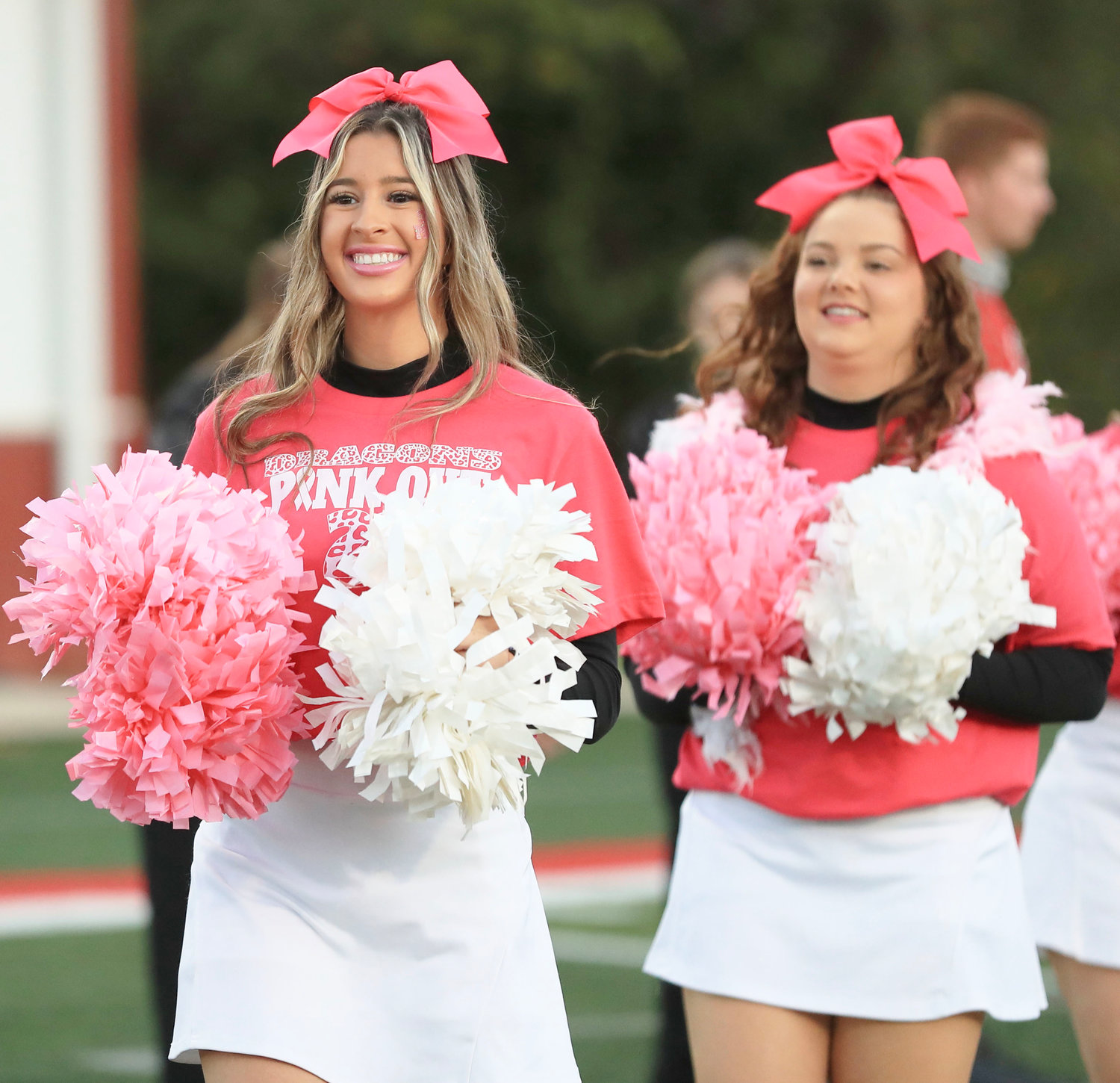 Kaylee Stephens and Avery Wren cheered on the Dragons at last Thursday’s Pink Out game against Crooked Oak.
Janet Moore 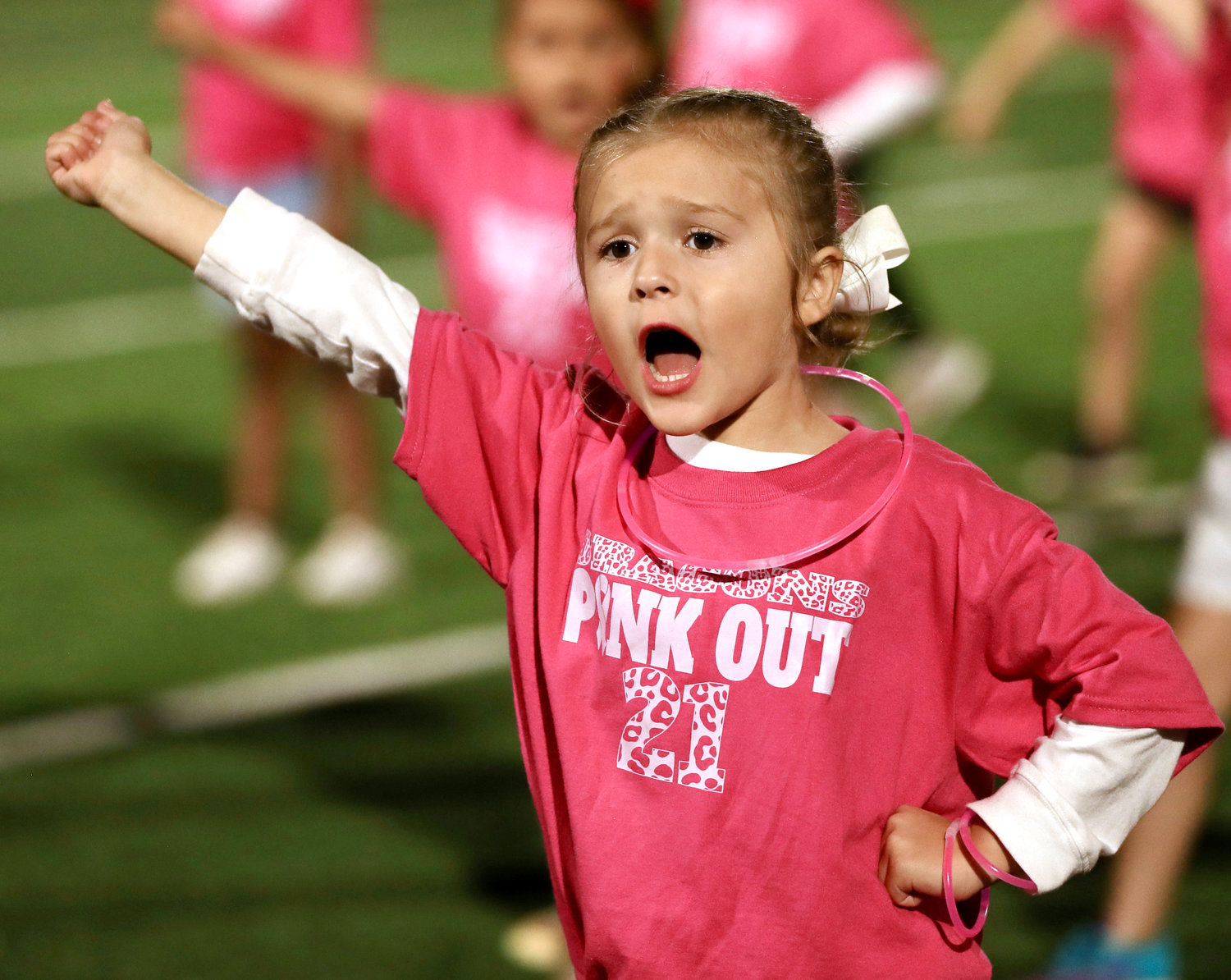 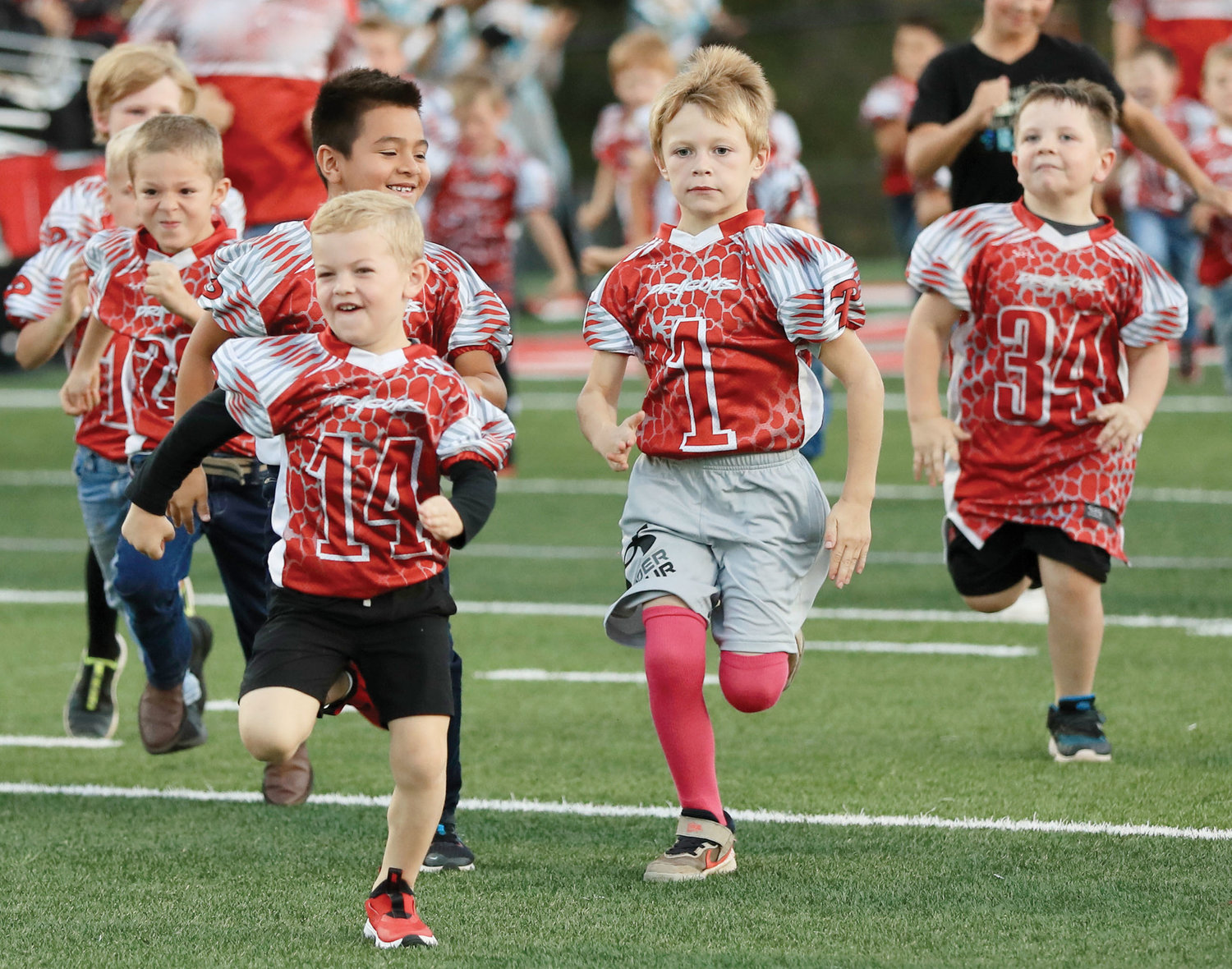 Deakon Fox (14) leads a pack of 7U Little Dragons onto the field Thursday night at Purcell’s game against Crooked Oak. Behind him is Joseph Englehorn (26), Ulises Espinoza, Jacksin Wilson (1) and Dean Williamson (34).
Janet Moore 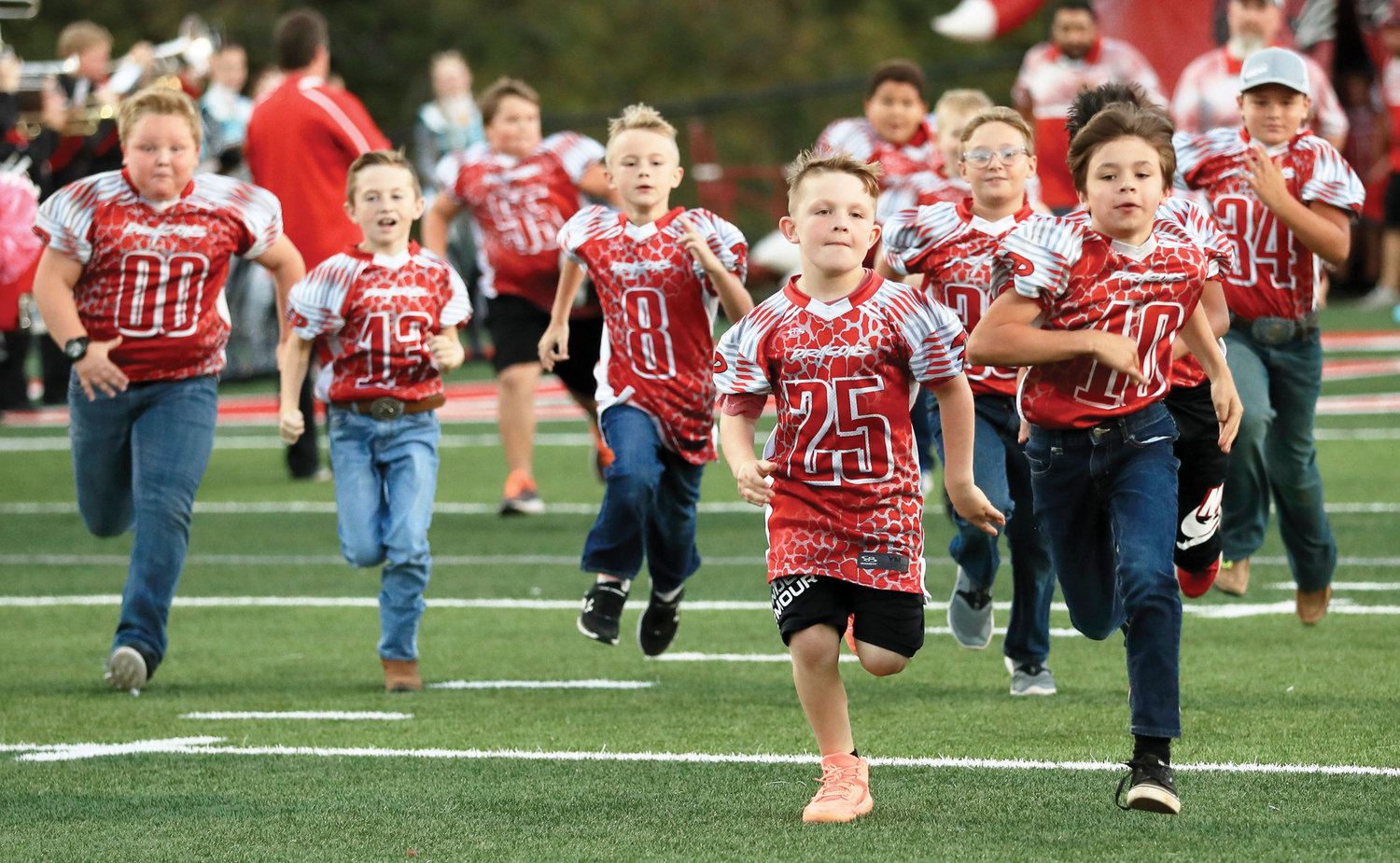 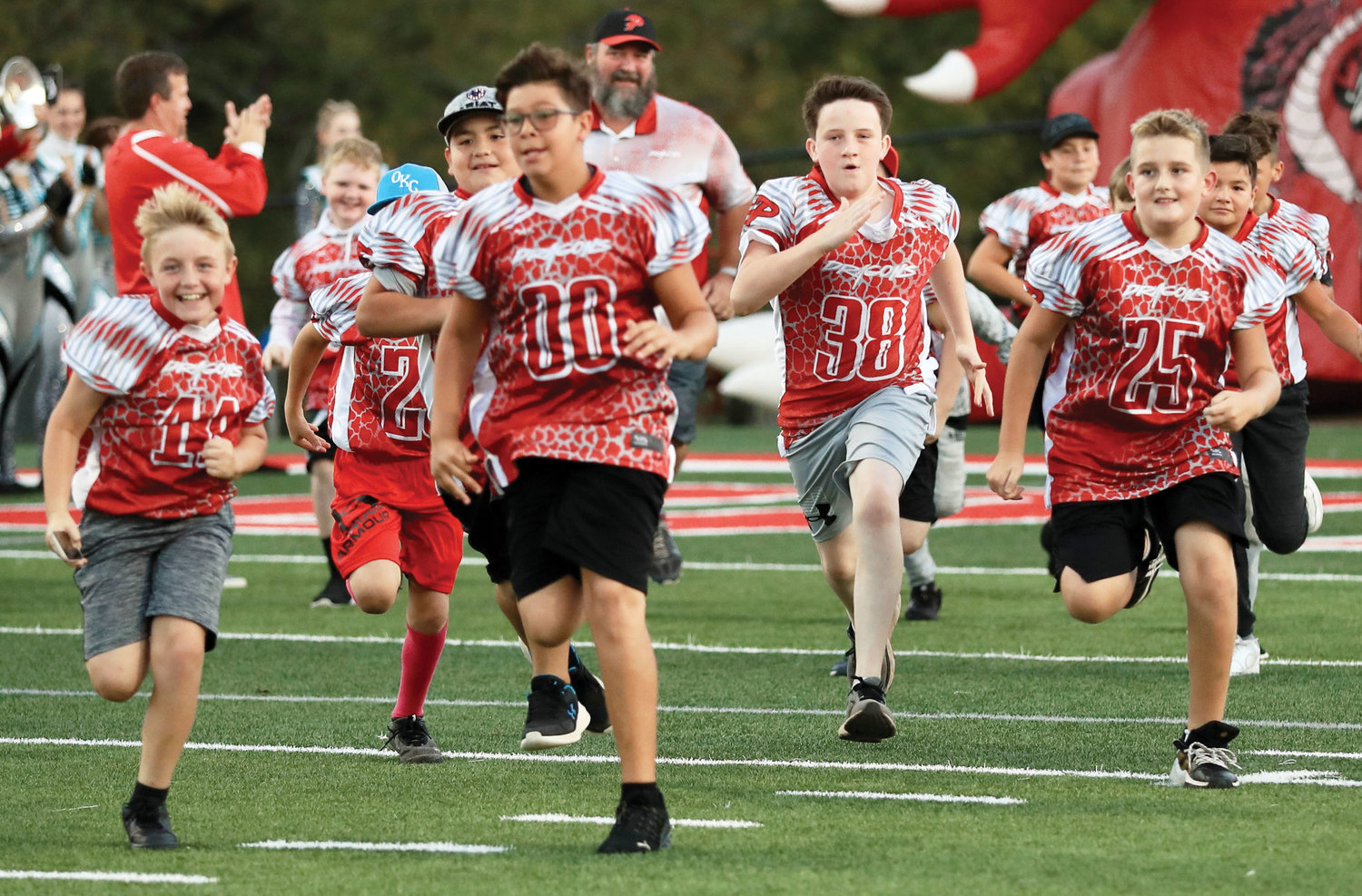 Purcell joined an elite group of Oklahoma high schools this past Thursday with their 56-7 victory over the Crooked Oak Ruf-Nex.

The Thursday night game, due to Fall Break, put the clincher on school win number 700 a milestone only seven other Oklahoma schools can lay claim.

Also honored after the game was former longtime Dragons Coach Mike Wilson, who has 98 wins as head coach and many more as an assistant coach.

The game wasn’t close from the outset with the clock running continuously in the second half.

Creed Smith, who was a perfect 5-5, threw four touchdown passes and Payson Purcell ran for a pair of scores, one an 81 yard cross-country jaunt. He finished with 83 yards rushing.

Freshman Boston Knowles led the rushing chart with 131 yards and one touchdown, a 70 yard burst.

Hayden Harp hauled in touchdown passes of four and 22 yards. Titus Mason scored on a 52 yard pass and off the arm of Smith and Jose Ochoa pulled down a 19-yard scoring aerial. Noah Mason also found the end zone on a five yard jaunt in the third quarter to close out the scoring.

As a team, the Dragons rushed for 308 yards and passed for another 119 scoring four touchdowns on the ground and four through the air.

Coach Tracy Scott praised the play of Davis and both Smiths, Creed and Brodrick.

“And, our down linemen on defense played well,” Scott said.

He was referring to the play of Engert, Holder, Brendan Bacon and Kevin Lawson.

The Dragons have a big game ahead Friday when they travel to Community Christian in Norman.

Kickoff for the key district contest is set for 7 p.m.

Scott said the Royals have a really talented quarterback in Boyce McIntosh, who is the son of the coach.

He throws to gifted receivers in Charlie Peterson and occasionally Bai Jobe, who anchors their defensive front.

Jobe is getting a lot of attention from Division I football schools for his defensive end abilities.

“He’s got the DI look, long and tall and comes off the ball very quickly,” Scott said.

“We’ll have to be able to run the ball on them and control the clock,” the coach said of the game with the Royals.

“And anytime you are in a big game the kicking game comes into play. We will have to sustain drives and get pressure on their quarterback. But we will have to contain him and keep him in the pocket because he can hurt you with his feet. We will also have to win the turnover battle.

“They do a lot of things defensively,” Scott said.

In fact, the Royals bring defensive pressure on almost every play.

“It will be both physical and tough mentally on us,” Scott said.

The Royals operate out of a spread with one back on offense and come at the offense with a 3-3 stack.

The Offensive Player of the Week nominee was Hayden Harp with touchdown catches of four and 22 yards.

Nominated as the Defensive Lineman of the Week was Tavian Engert, who had five tackles last week.

Line coach Kurt Gray nominated Jace Clary as the Offensive Lineman of the Week. He graded out at 85 percent against Crooked Oak.