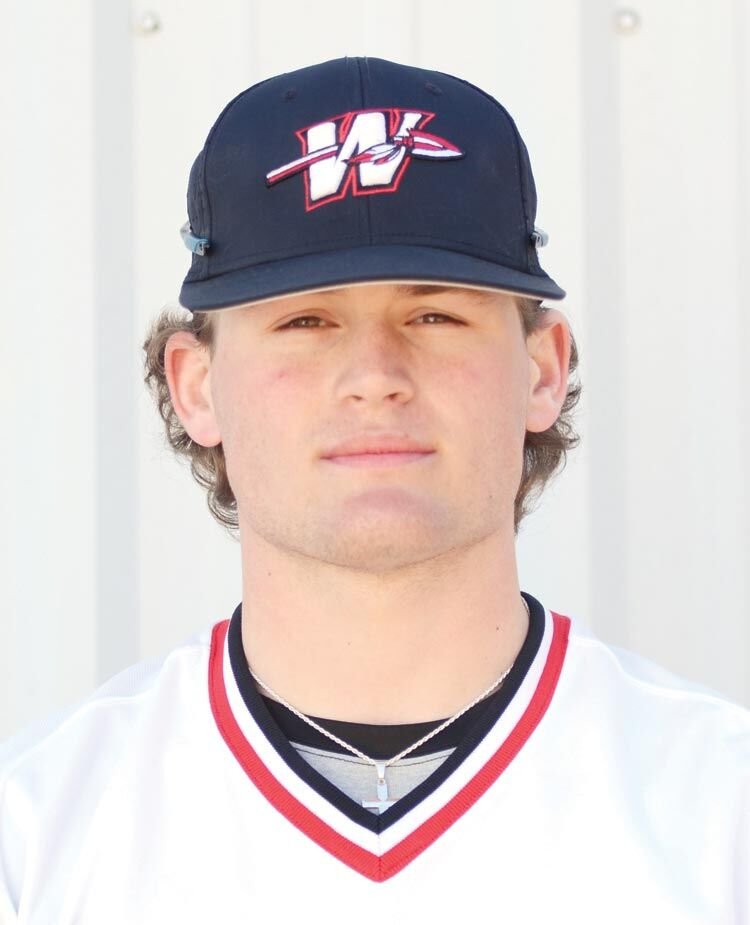 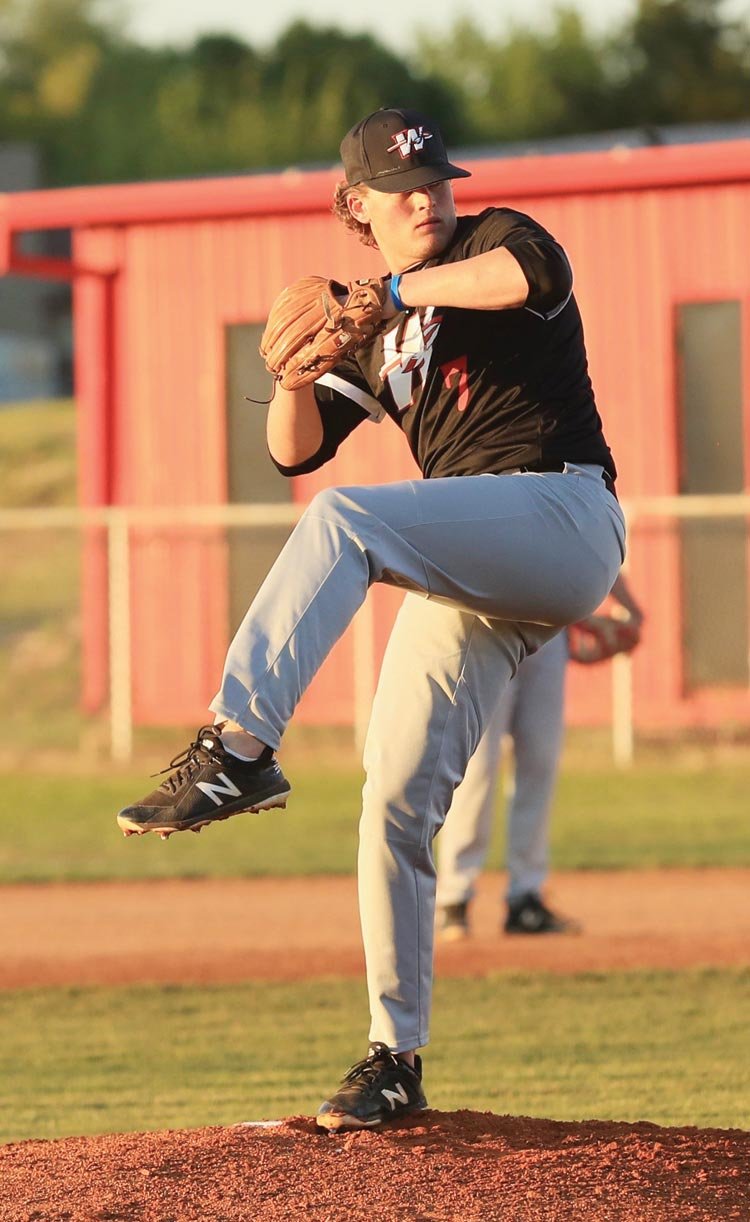 Nick Andrews threw a two-hit shutout against Purcell in the 2019 Heart of Oklahoma Baseball Tournament. Andrews struck out 10 batters during Washington’s 8-0 win.

The baseball gods must have thought great things about the Washington High School baseball team about 18 years ago.

That’s because they saw to it to put a Warriors jersey on graduated 2019 senior Nick Andrews – who has proven that he has a lightning bolt of a right arm on the mound.

The 6-foot-3, 215-pound right-hander has the build and physique to be a quality pitcher for years to come.

He signed with the University of Oklahoma last year after his junior year because Oklahoma baseball head coach Skip Johnson recognizes a good pitcher when he sees one.

Andrews is excited about his upcoming college career. He credits Washington head baseball coach Jeff Kulbeth with getting him to this level.

Kulbeth himself was a second baseman at El Reno Junior College (now Redlands Community College) in El Reno from 1984-86.

“Coach Kulbeth was a baseball player in college,” Andrews said. “He is just a great guy to play for. Wherever he wanted me to go, I would have gone there. He was a great coach and he cared about you as a player. He treated me like I was his son. He wasn’t afraid to get a hold of you when you did something wrong. But, he was the first one to compliment you when you did something well.”

Andrews is not a body builder but he has stayed strong throughout his prep career through a well thought-out weight lifting regimen.

“I enjoy being in the weight room to be honest,” Andrews said. “You definitely get a lot better by being in the weight room. But, you have to do it the right way. You can’t overextend yourself in whatever sport you play. You can’t lift weights like a body builder in other words. You still have to be flexible and have mobility. I focus on both getting stronger and also keeping my flexibility.”

His weight room regimen translated over into a pretty good football career up until his junior year. He incurred a shoulder injury to his right (pitching) arm. He could have continued on with football if he wanted to. But, deep inside, he knew baseball was his future.

“I played middle linebacker in football,” Andrews said. “When I was playing football, I liked football. When I played baseball, I liked baseball. I never had a real favorite. It just depended on what time of year it was. But, when the Sooners signed me in baseball, that’s where my heart is now.

“I only played football until my sophomore year because of a shoulder issue. It was my right shoulder – the same arm I pitch with. I didn’t want to mess that up.”

Washington went to the Class 3A state baseball tournament in 2019, where they beat Chandler, 6-3, before losing to Marlow, 15-3, in the state semi-finals.

“My junior year last year was the first time that Washington had been to the state tournament in a long while,” Andrews said. “The two years before that we were state academic champions.”

The OCA game in Tulsa was cancelled due to the virus. But, the OBCA game will be played at 5 p.m. this Saturday at the Bricktown Ballpark in Oklahoma City. Andrews’ teammate, Gabe Williams, will also be on the Middle West roster.

Williams hit .346 his junior season with five home runs and 28 runs batted in. He also went 7-4 with a 3.30 earned run average on the mound. He led Washington in hitting both his sophomore and junior seasons.

Before the shutdown his senior year, he was 2-0 on the mound with 12 strikeouts.

Andrews himself went 7-2 off the rubber with a 2.27 ERA and 76 strikeouts in just 49.1 innings of work. He walked just 16 batters and he also was a stout hitter – hitting .292 with three home runs and 16 ribbies as a junior. Before the shutdown this season, Andrews was 2-0 with 17 whiffs, three walks and no hits in two starts.

When Covid-19 shut things down totally for the school year this spring, Andrews took it in stride thanks to his Christian upbringing and belief in God.

“It wasn’t too hard on me,” Andrews said. “I was just thinking about the future. There’s always a plan from the’ Big Man Upstairs.’ He’s always got a bigger plan for you. I accepted it and moved on.”

Kulbeth (who just ended his third season as head coach at Washington) has been with the Warriors for 14 years – and 30 years total in coaching. He thinks Andrews might be one of those “can’t-miss” prospects.

“He was a player who bought in to our process,” Kulbeth said. “He was one of five guys who started as sophomores for us. They all bought in to the process that we tried to get into. That was just hard work and consistency. Nick just matured mentally and obviously physically throughout his time at Washington. He was really dominant as a junior and we expected that from him. We expected great things from him as a senior.”

When the Coronavirus shut down Washington and all other Oklahoma schools, it was a bittersweet pill for Kulbeth to swallow.

“We preach all the time to our guys to control what you can control and that’s hard to do,” Kulbeth said. “I took (the shutdown) worse probably than the players did because when I got the word, I texted my kids with a heavy heart. But, they all told me, ‘Hey, coach. You tell us to control what we can control.’ I felt like I won in a way after that because that showed me what I had been telling them.

“They listened to me. They paid attention to me. I was disappointed just like everybody was. Our expectations were high this spring and we had a bunch of returning seniors along with a great incoming group of players. Our kids thought we could win the whole thing.”

Andrews is already on the pro scouts’ radars.

“Nick went to work and had great success his junior season,” Kulbeth said. “The summer before his senior season, he got to pitch in the Area Code Games and the Oklahoma State Games. He was invited to three or four closed professional scouting sessions. He was really feeling well and, like I said before, he was expected to have another stellar year his senior season this spring.

“Obviously, OU doesn’t come calling to just anybody. He’s got some great upside and he was 93 for us in the early part of March. I think he could add three or four miles per hour on his fastball. He’s got an incredible changeup. He’s got a huge upside and it will all be about his mental approach.”

Right now, Andrews throws a consistent 94-mile-per-hour fastball, a curve/slider that touches 83 MPH on the radar gun, and a wicked 78 MPH change-up that keeps hitters on their toes.

If a baseball fan thinks about it, Andrews would remind them of New York Yankees pitcher Gerrit Cole, who was a standout for the Houston Astros and the Pittsburgh Pirates the last seven years.

Andrews and Cole even resemble each other – in the face and by body stature. Cole is 6-foot-4 and 225 pounds.

“No question!” Kulbeth said. “Nick’s got a great frame and he could put on 15-20 pounds and it wouldn’t affect him any. He’s going to get stronger and Coach Johnson at OU is known for his pitching mind. I just have a feeling if Nick goes in and goes to work both physically and mentally, he’s got a chance to do some really special things.”

Even though the OBCA game is this Saturday, Andrews isn’t planning on pitching.

“I don’t think I’m going to play in the game because my elbow has been pretty sore,” Andrews said. “The OU coaches just want me to chill out until I get on campus. I think I will be there in the dugout to watch the game. I’m just working out and running right now.”

Lacee and Nick Andrews (Nick’s mom and dad) will be in the stands. He also has two siblings – a younger sister named Bella and a brother named Cash.

Andrews said his family is excited to be attending the OBCA game in Bricktown.

“He was one of the best I’ve ever coached,” Kulbeth said.