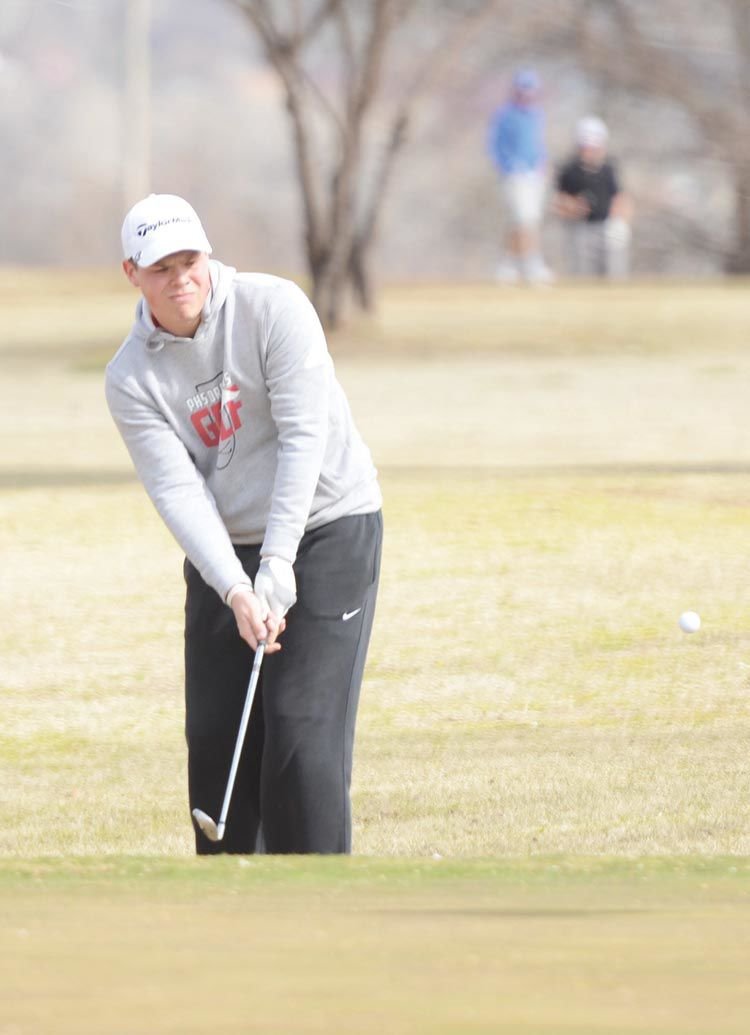 Bryce Tuck looks to save par during the Purcell Invitational Golf Tournament at Brent Bruehl Memorial Golf Course. The Dragon one man shot 91 in difficult conditions.

A person can give Bryce Tuck a golf club and he’ll help your team to the state golf tournament with hardly any experience.

A person can give this guy a snare drum and he’ll help your school’s band to award-winning excellence.

One can give this guy a chance to be an excellent student. He’ll get there at the top of his class as the valedictorian.

Purcell senior Bruce Tuck did all three of these things – and all of it in a low-key, matter-of-fact, humble manner.

“Bryce is an outstanding young man,” said Purcell golf coach Mike Gowens. “I mean that wholeheartedly. He’s got great character and he’s a fabulous student. You probably couldn’t say anything bad about Bryce in any way.”

Gowens is honest in his assessment of Tuck as a golfer.

From the beginning, though, Gowens could see the effort and gumption that Tuck put into the game. As a junior, Tuck helped the Dragons to the Class 3A State tournament in 2019 – as well as the Class 3A academic golf team State title.

“Bryce started out playing golf for me as a freshman,” Gowens said. “He wasn’t a very good player as a beginner but he worked his tail off and last year as a junior he made the State tournament.

“He really did a good job. He’s going to work hard at whatever he does and make himself better and better. He’s outstanding in the band and there’s not enough I can say about Bryce and there’s nothing bad I could ever say about him. He’s just a great young man and a good kid to have around. I will miss him a bunch.”

Tuck has an extensive high school resume. He was Purcell’s senior class president and head of the student council.

He was on the executive committee that oversaw the extracurricular activities and community service projects that Purcell underwent.

“I thoroughly enjoyed my high school career,” Tuck said. “Everything I was involved in was a lot of hard work but I enjoyed being a student, a golfer, and a band member. I definitely feel the bonds I made. My family was a big part of it.”

Tuck is the only child to Candy and Larry Tuck. The couple should be commended for the kind of young man they produced.

Tuck played the snare drums for the Purcell marching band under the leadership of band director David Hilger.

“When I was in band, we worked for months on end trying to put on a show and I built some great friendships that way,” Tuck said. “We worked very hard in trying to win the State title in band at the end of the year. I was the snare player on the drumline for three years. We were the 2017 academic State champions.”

In golf, Tuck made huge strides in his game from his freshman year to now. The Dragons made the State tournament during Tuck’s junior year in 2019.

“With golf, it was the same thing,” Tuck said. “Just getting out there on the links and being able to play a sport that I have fallen in love with and really enjoy playing was a blessing.

“When I picked up golf my freshman year, I wasn’t that great at all. But, I wanted to get better at it.

“Having people in the program work with me and trying to make me a better player was fantastic. My junior year, we made to it to the State tournament and I was super excited about that last year.”

The list of accomplishments during his days at Purcell is long for sure.

He was the National Honor Society president for Purcell. He was on the school’s academic team headed by Jack McNeely. He had a 4.0 “non-weighted” grade point average. His weighted GPA was an astronomical 4.33 which made him Purcell’s valedictorian – No. 1 out of 95 graduates.

“I was sincerely excited to see my final GPA. I said to myself, ‘Wow!’ It was actually very humbling and I just thank everyone who helped me see my goals through.”

Student council was a very fulfilling experience for Tuck and he’s glad he was a part of it.

“Student council was fun for me because it involved a bunch of community service in Purcell,” Tuck said. “I was senior class president and that was fun because we got to do community service projects. We got to go outside the classroom and bring money in to provide things for the school.

“We had a canned-food drive and we also had our dances. It was a fun way to create spirit and be a part of the school – and I loved doing that. I was so glad that I was voted into a position where I could actually go and be a part of doing things for the school.”

Tuck is going to The University of Oklahoma soon. He plans to major in civil engineering.

He also is going to try out for a spot in The Pride of Oklahoma marching band.

“I’m pretty pumped about going to OU and majoring in civil engineering,” Tuck said. “I think that major will be a lot of fun for me. I’m thankful that I have the work ethic and that I’m able to push myself further to greater and better things.”

He’s never played in a four-piece band with a vocalist, a bass player, a drummer, and a lead guitar player. But, he probably could if he wanted to.

“I never thought about my favorite drummers in music,” Tuck said. “That’s a totally different deal from being in a drum line. We play as a group in the band line. I never have played in, say, a four-piece band. But, I would like to try that.

“I like Charlie Watts of the Rolling Stones. I liked the late Neil Peart of Rush. I really like and admire Rick Allen of Def Leppard. It’s amazing how he lost his left arm in a car accident and still he came back and is able to play the drums with a special kit. That’s very inspiring.”

Tuck dealt with the early closing of school the best that he could. He never envisioned such an ending to his stellar career as a high school student, golfer, and drummer.

“I had my senior golf season wiped out. I had my concert band season wiped out. I was really looking forward to possibly making it back to State in golf again this year. I was looking forward to going back to state in band competition, too. I was pretty upset but I understood what was going on. It’s one of those things that upset you but I was fully understanding of the decision at the time. I am just going to look toward the future and get on with life at OU.”