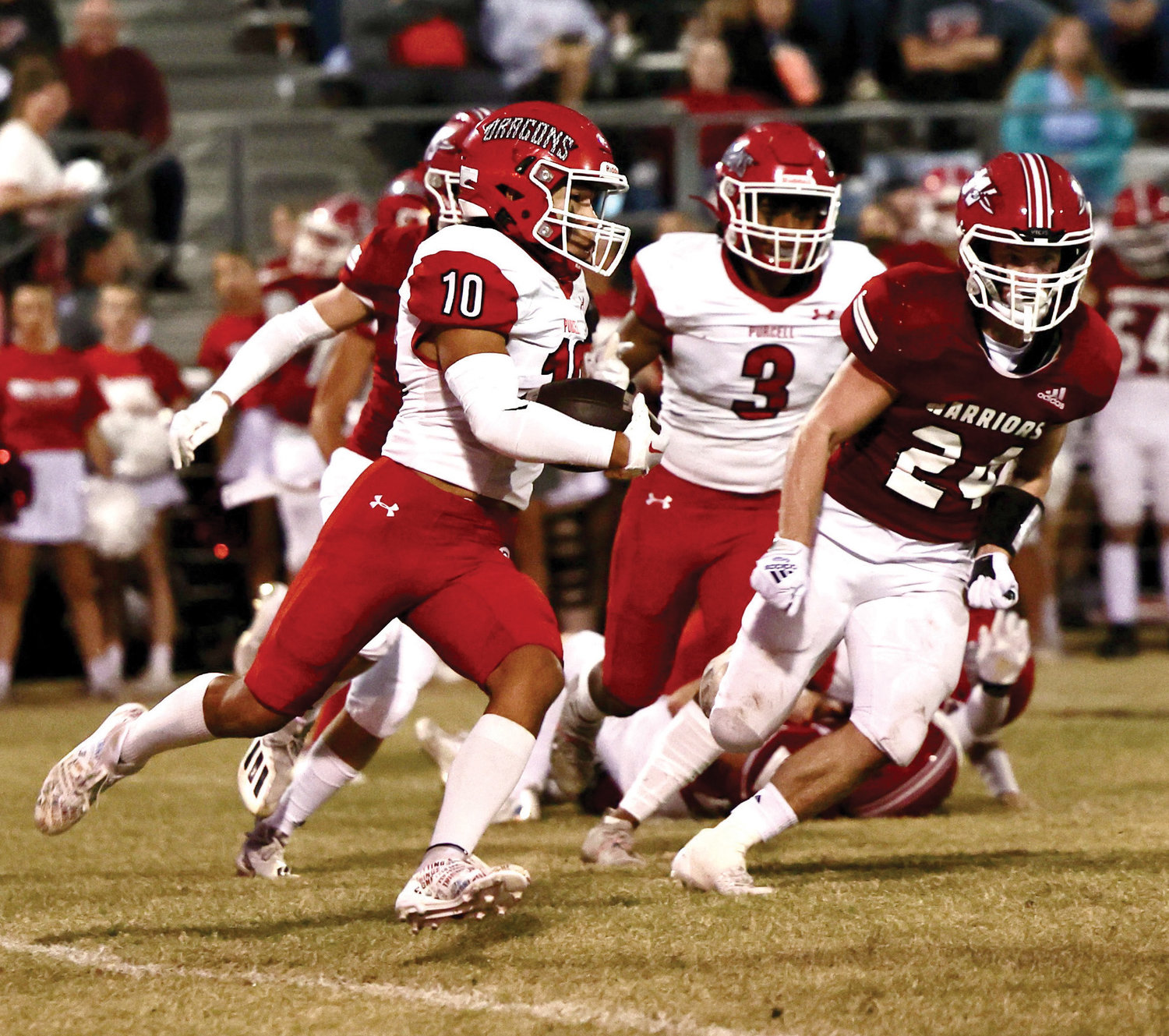 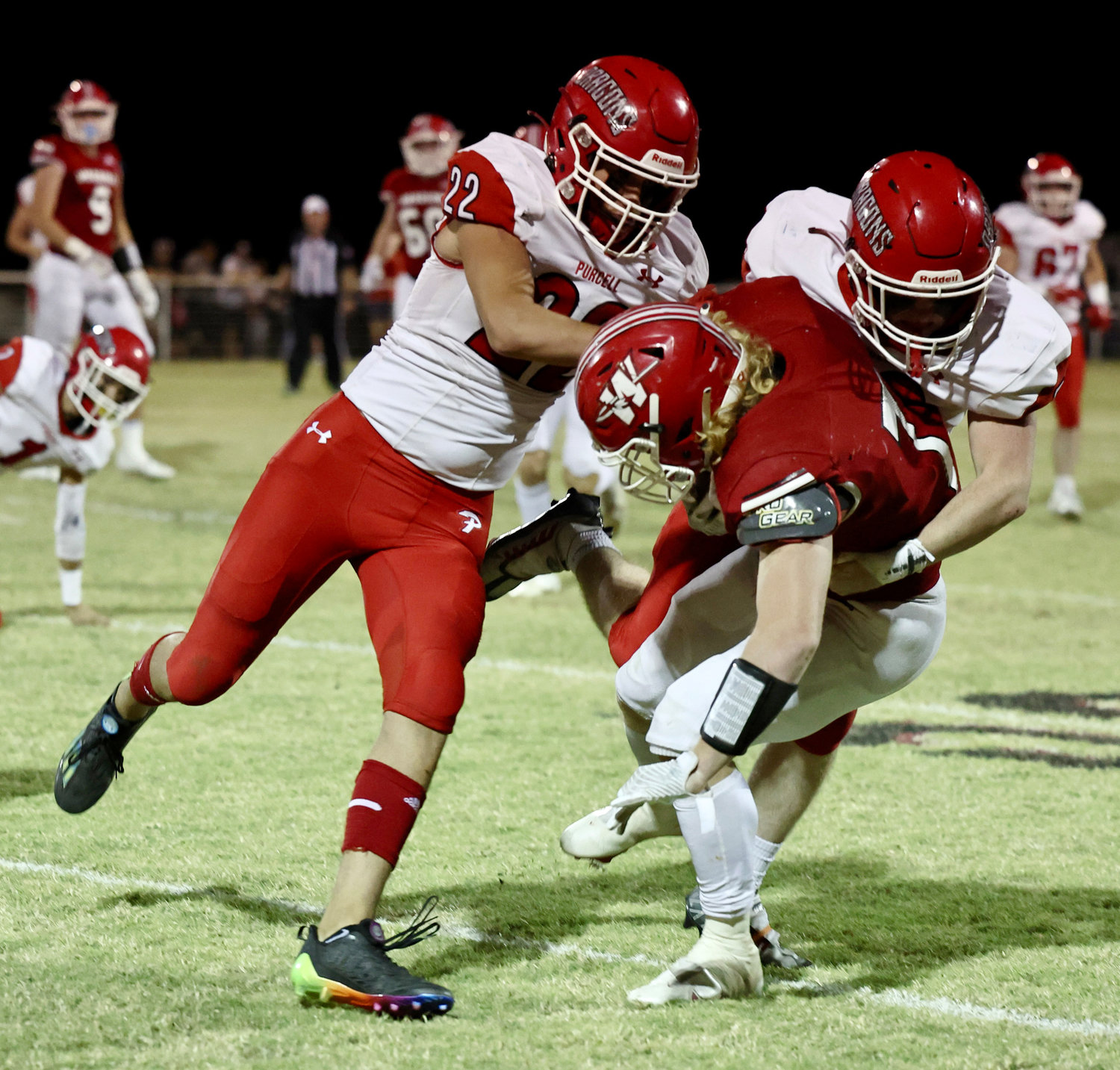 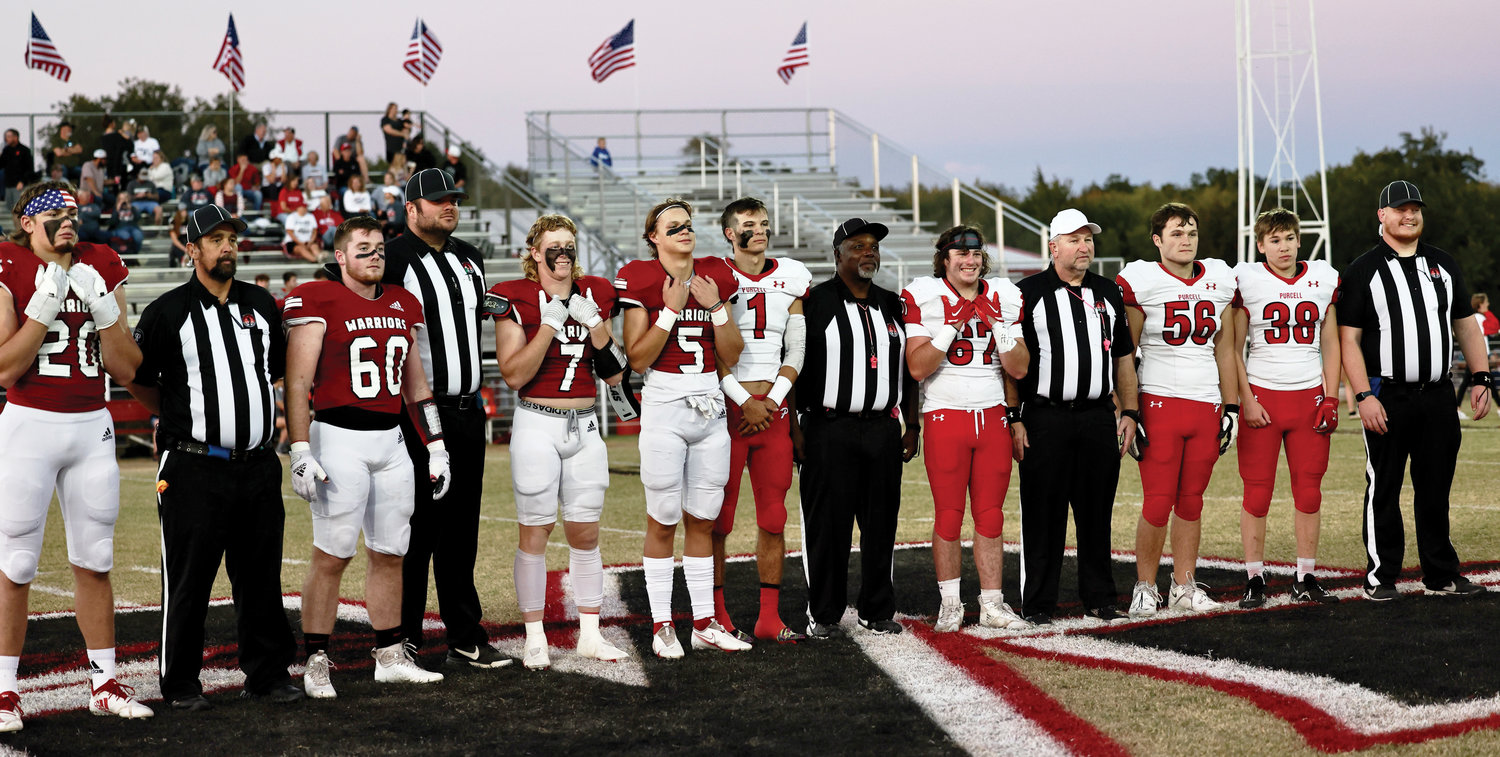 Team captains from the Washington Warriors and the Purcell Dragons lined up with the game officials before last Friday night’s contest in honor of Official Appreciation night.
Janet Moore 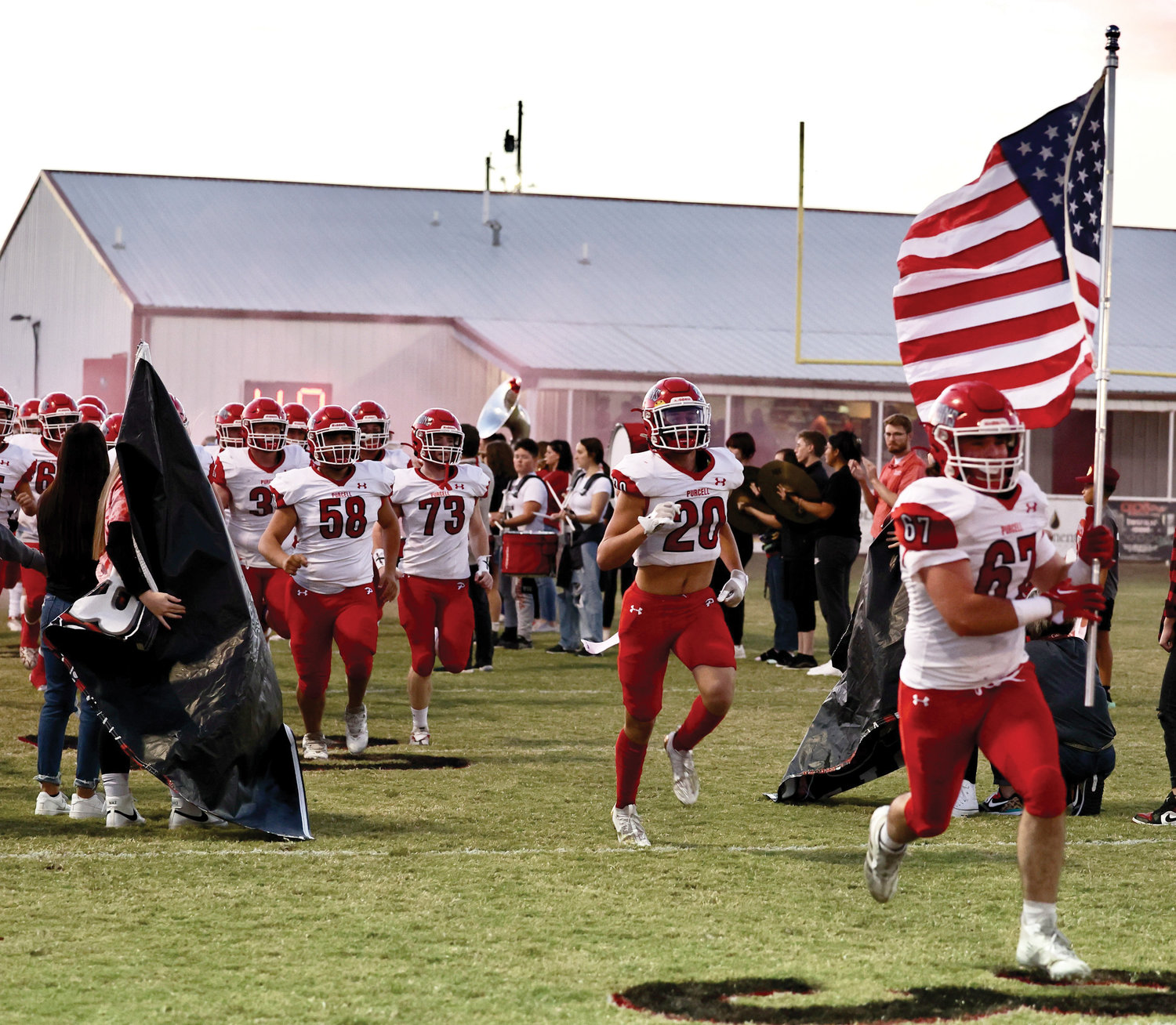 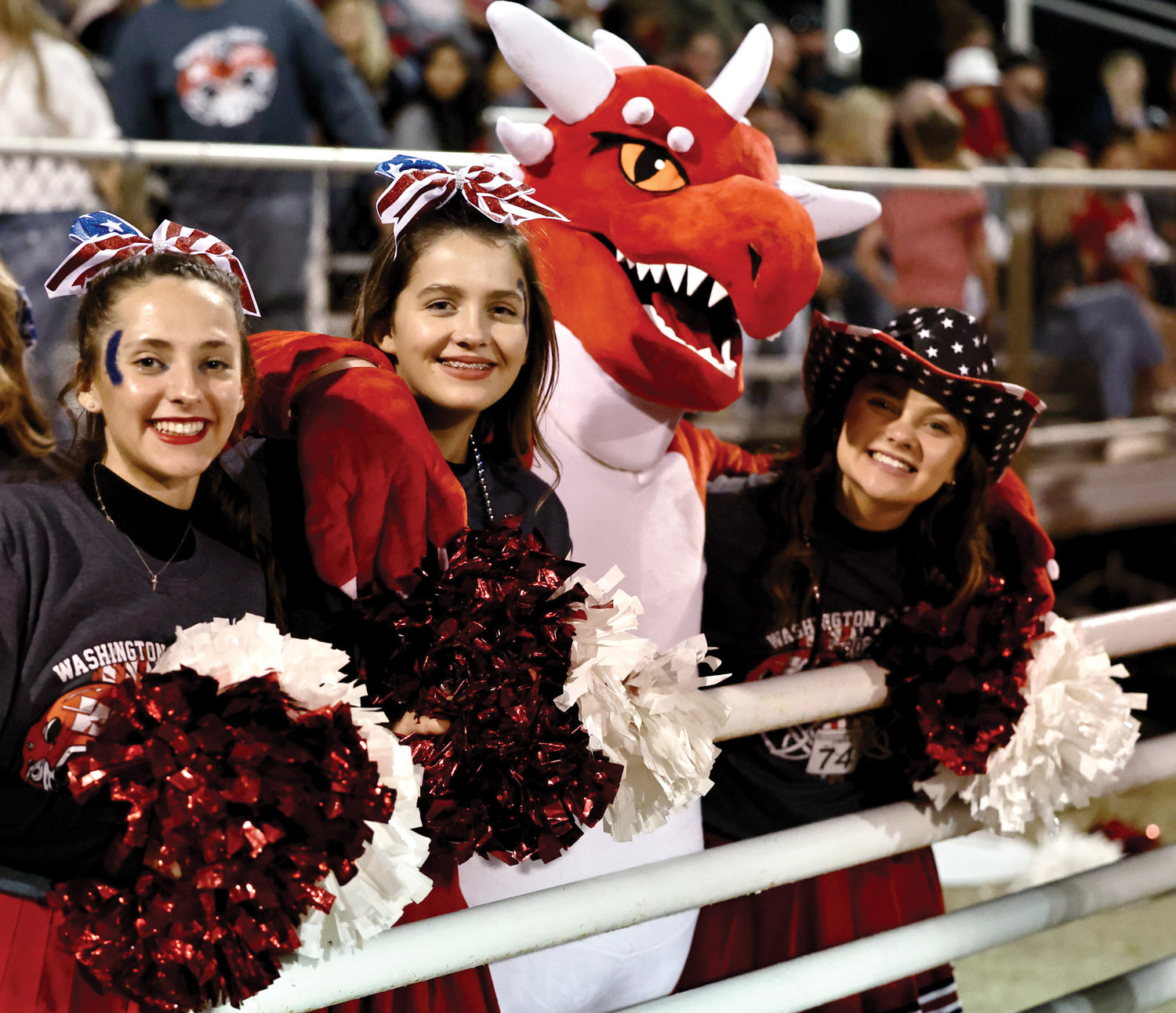 The Indians will employ every offensive formation from a one-back look to an empty backfield, Purcell Head Coach Tracy Scott reports.

“They like to throw the ball a lot,” Scott said.

When the Dragons have the football expect Little Axe to operate out of a 4-3 alignment.

“They’ll use some man coverage at times and some zone coverage,” the Purcell head coach said.

“We need to just come out and play,” Scott said. “We need to get after them early, execute on offense and not turn the ball over.

“We need to recognize their offensive sets,” the coach noted.

The Dragons came up on the short end of a 40-7 decision at Washington last Friday night.

The lone Purcell score came in the fourth period on a four yard Boston Knowles run.

Washington jumped out to a 14-0 first quarter lead and stretched it to 33-0 at intermission.

“They are a good football team,” Scott said. “They are well coached.

“I thought, as a whole, we played pretty well on defense, especially Brody Holder,” Scott said.

Holder made nine tackles against the Warriors and had one quarterback sack.

Leading the defense with a dozen tackles each were Kash Guthmueller and Payson Purcell.

Ryker Fink registered seven tackles with Austin Burton, who broke up a pass, right on his heels with six.

Purcell Head Coach Tracy Scott nominated Brody Holder as the Defensive lineman of the Week for his nine tackle performance against Washington.

“He played hard and had another good week,” Scott said of Holder.

Scott nominated Payson Purcell as the Defensive Player of the Week. He finished with 12 tackles against Washington.

“Both of our linebackers played well,” Scott said. “Payson has played well the last couple of weeks.”

There were no nominations for offense.