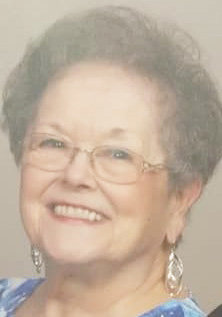 Marilyn Louise Wilkinson was born April 3, 1938 in Cedar Vale, Kan., the older of two children born to Louis Joseph ‘LJ’ Wilkinson and Beulah Christine (Donohue) Wilkinson. She was raised in Cedar Vale and attended school there, graduating with the Class of 1956.

By chance she met a young man, who had just returned from the service, and their first date was at a baseball game. She married Joseph Paul ‘Joe’ Ellis on May 17, 1959 in Cedar Vale. They spent part of their honeymoon, also at a baseball game, and this began their beautiful life together.

By 1962, Joe and Marilyn had settled in Purcell. Joe was working for the railroad, and Marilyn looked after the home. She was the proud mother of two children, daughter Pam, and son Ronnie.

Marilyn was a woman of great faith and longtime member of the Trinity United Methodist Church in Purcell. For more than 23 years, she worked as the church secretary, but Marilyn served the church in many other ways. She was a Rotary Cook, taught Sunday School, led a prayer chain and served as a door greeter.

Marilyn was an avid sports fan. She played co-ed softball and was an avid bowler, and a staunch supporter of the Purcell Dragons. Side by side with Joe, she traveled all over the state supporting her team, and she attended 311 Dragon football games. She was a founding member of the Mama Dragons and supported Purcell schools in many other ways.  When given the chance, she would trade her Dragon red for Jayhawk blue, and she traveled all over the United States to cheer for Kansas basketball.

Marilyn served her community whenever she could, as a member of the Election Board, and a co-hostess at the railroad depot.  Marilyn was a beautiful soul with a welcoming smile, kind and considerate, and gave much of herself for others. She was a wonderful wife, mother, grandmother and a true friend.  She will be dearly missed!

She was preceded in death by her son, Ronnie Ellis; her parents, L J and Beulah Wilkinson and her brother, Kenneth Wilkinson.