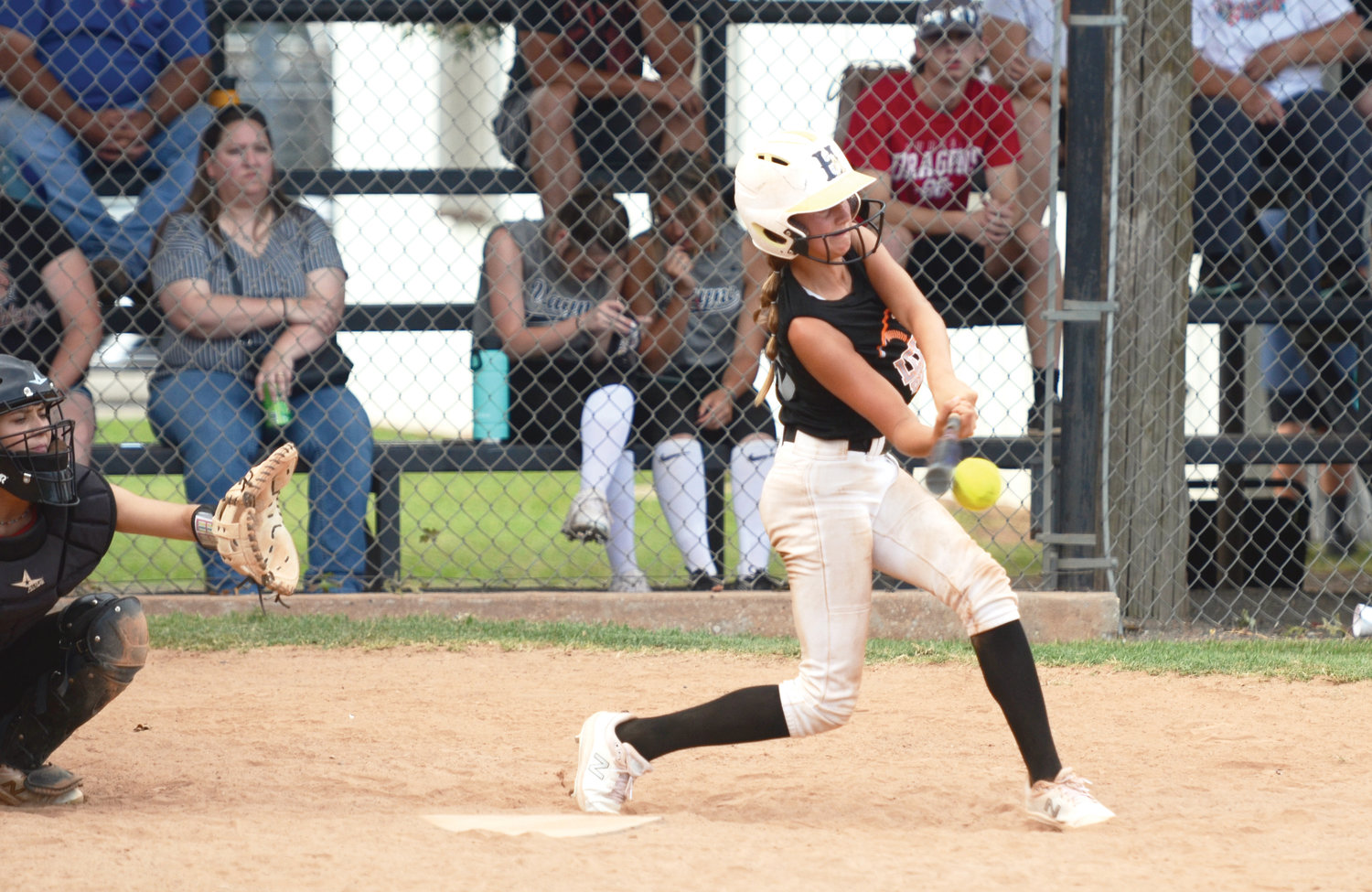 Lexington freshman Baylie Rillema puts a ball into play for the Bulldogs. Rillema and the Lady Bulldogs were scheduled to host Meeker on Tuesday and host Bethel today (Thursday). They are scheduled to host Purcell next Tuesday.
John Denny Montgomery
Posted Thursday, September 2, 2021 9:00 am
John D. Montgomery

Lexington opened the Roff Tournament with a bang last Thursday shutting out Bethel 7-0 behind a strong pitching performance by junior Cora Vasquez.

Vasquez tossed a complete game scattering six Bethel hits. She also helped her own cause going 3-3 at the plate that included a double and she had an RBI.

Baylie Rillema, Kiley Givens and Izzy Pack all had RBIs in the frame. Pack was a perfect 3-3 at the plate in that contest and had a pair of RBIs.

They knocked off Caney 3-1 with Vasquez striking out six. She also tripled in a 1-2 hitting outing. Givens was 2-2 and had one RBI.

Also getting hits were Rillema, Harmon, and Abby Turnpaugh who doubled and had an RBI.

Lexington pinned an 8-5 loss on Davis, out-hitting the Lady Wolves 9-6.

The Lady Bulldogs trailed 5-2 heading into the top of the fourth when they flipped the offensive switch.

Turnpaugh turned on the first pitch of her at bat and lined a three-run double. She finished with four RBIs.

Pack was 2-3 with an RBI and Rillema went 2-3. Vasquez had a double in three plate appearances. She and Pack shared time in the circle both tossing two innings and each giving up three hits.

The only glitches for Lexington were a 3-0 loss at the hands of Roff and a narrow 1-0 loss to Ada.

In the Roff contest, Pack had two hits and Givens one. In the Ada loss, both Turnpaugh and Givens reached base on hits.

On Monday, the Lady Bulldogs dropped a 6-2 decision at the hands of Little Axe.

Four runs in the fifth by the Lady Indians proved to be the difference.

Vasquez doubled in that contest while Barber, Givens and Harmon all got hits.

That loss drops Lexington to 4-12 on the season.