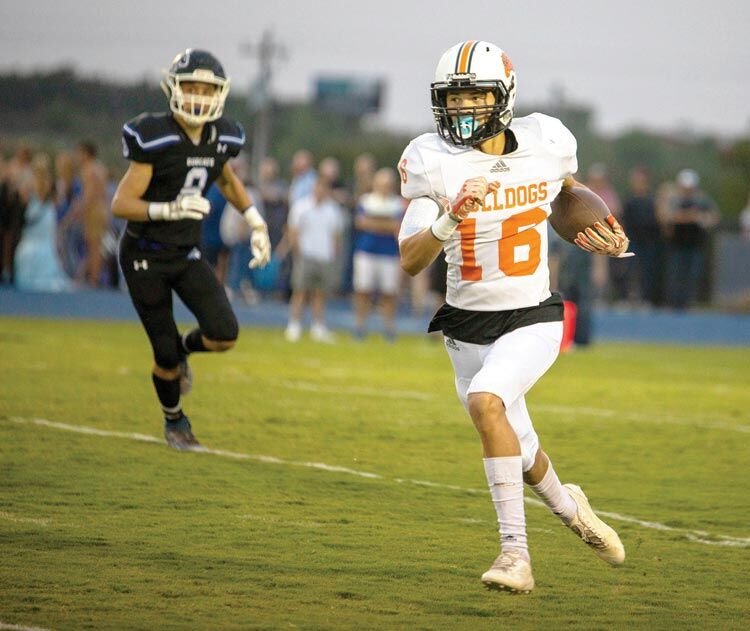 Dylan Cottrell puts on the jets Friday night during Lexington’s game against Bridge Creek. The Bulldogs were defeated 27-12 by the Bobcats. Cottrell was called to duty at quarterback after the starter, Ezra Faulkenberry, left the game with an injury. 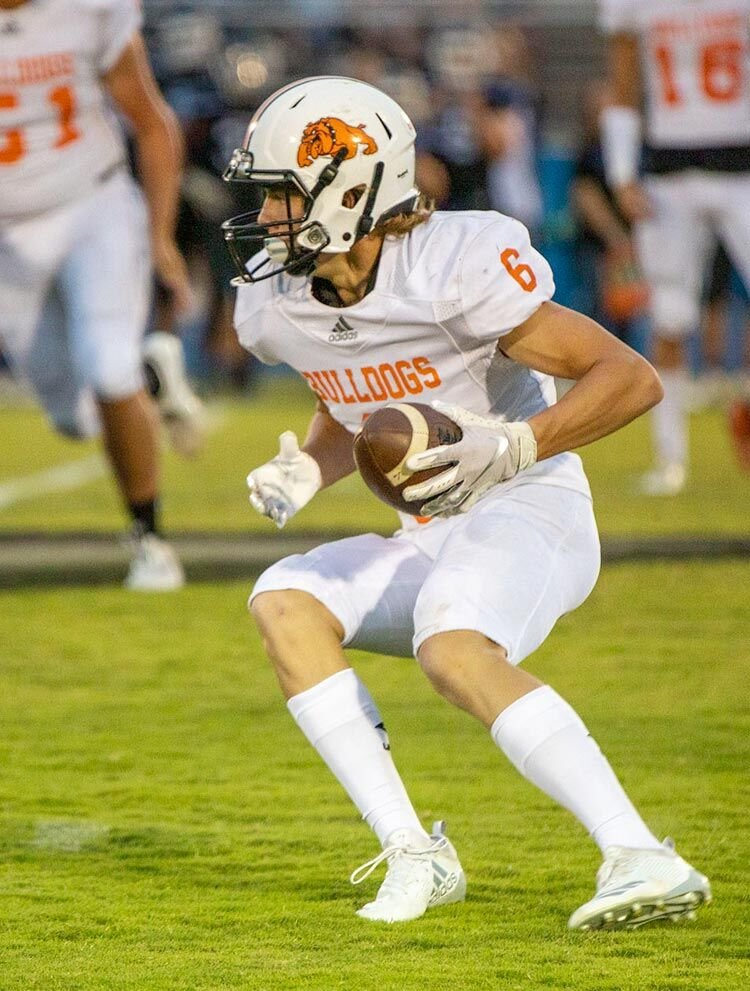 Heath Winterton looks for running room Friday night at Bridge Creek. The Bobcats defeated the Bulldogs 27-12. The junior running back gained 10 yards on five carries and he had two catches for 50 yards.

However, the ‘Dawgs know that this week’s homecoming game against the Crooked Oak Ruf-Nex is really the start of the 2020 season. Lexington has used the first three games as sort of a “pre-season” tune-up. The Bulldogs will take a 1-2 mark into district play.

The ‘Dawgs will have to come at Crooked Oak with some major bite in order to start off their district schedule on a good note. The Ruf-Nex are 0-1 after having lost to Class 2A Hennessey, 33-7, last Friday night.

Bridge Creek’s Bobcats drew first blood when they put together a quick two-play scoring drive beginning at the 50-yard line.

Lexington suffered two major injuries in the first half. Quarterback Ezra Faulkenberry went down with a reported concussion. On Bridge Creek’s scoring play, junior defensive back Chase Johnson was knocked out of the game with a neck injury.

It took about 40 minutes to get a Tuttle ambulance to the scene before Johnson was taken from the field on a stretcher in a neck brace. This follows an injury to junior offensive lineman Keegan Martin, who suffered a broken leg in the September 4 Allen game.

“In the first half we had some opportunities,” head coach Keith Bolles said. “We didn’t  execute very well offensively. Our defense played lights out though. They’ve made some big plays.”

Bridge Creek built the lead to 20-0 in the third period.

Dylan Cottrell, in for Faulkenberry, passed to Seth Pearman for a 29-yard touchdown with 11:50 to go in the fourth quarter. The two-point try was no good, leaving Lexington in a 20-6 hole.

Heath Winterton caught a 15-yard touchdown pass from Cottrell for a touchdown with 10:31 left in the game. The two-point try was again no good for the ‘Dawgs, which left Bridge Creek leading 20-12.

The Bobcats closed out the scoring with  just over five minutes to play giving them a 27-12 win.

Cottrell’s thoughts after the game were primarily on Johnson’s and Faulkenberry’s health.

“We went out there and tried to give it all that we had,” Cottrell said.

“After Ezra went down with his injury, I was just trying to rally our team back into the game. We were only down by a touchdown at halftime but we let them put three more touchdowns on the board in the second half. We’re going to come back stronger than we did tonight. I still think we’re going to go a long way.”

Cottrell was thrown onto the gridiron behind center with no notice. Bolles, however, was pleased with his junior play maker. Cottrell completed 7-of-18 passes for 141 yards and two touchdowns.

“When the ball is in his hands, anything can happen,” Bolles said of Cottrell, who displayed a strong fearless arm throughout the game. “We thought he did a great job and we’re really happy with him as a coaching staff.”

Junior running back Heath Winterton gained 10 yards on five carries and he had two catches for 50 yards. Winterton also recorded seven total tackles (three assisted) with two tackles for losses and one fumble recovery on defense.

Despite the loss, Bolles was rather pleased with the play of many of his younger players who stepped to the forefront.

“We came into this game trying to get better for our district schedule which starts this week,” Bolles said. “I saw some of our young kids step in there and play their hearts out. I saw some encouraging things. I really did.

“Yes, we lost but I’m looking at the overall big picture. We had some of our older players pull those younger guys under their wings and really lift them up. I was so proud of that aspect of our game. Our team grew.”

Injuries are becoming troublesome for the ‘Dawgs. Bolles was understandably worried about the health and well-being of Johnson and Faulkenberry.

“We’re praying for Chase and Ezra,” Bolles said. “Our kids faced adversity again. They kept competing though and never quit. We are looking forward, not backward. We still have a lot to play for.”

Bulldog notes: Lexington Head Coach Keith Bolles nominated Dylan Cottrell as his Offensive Player of the Week for his step-up performance at quarterback, going 7-for-18 for 141 yards and two touchdowns. Heath Winterton was nominated for Defensive Player of the Week for having seven tackles with three assisted and two tackles for loss and a fumble recovery from his defensive back position.

Cam Conner was selected as Lexington’s choice for both the Offensive Lineman and Defensive Lineman of the Week. On offense, Conner graded out to 55 percent. On defense, he recorded one tackle despite being double and triple teamed all night long.