Beat Vanoss twice on Tuesday to take the title 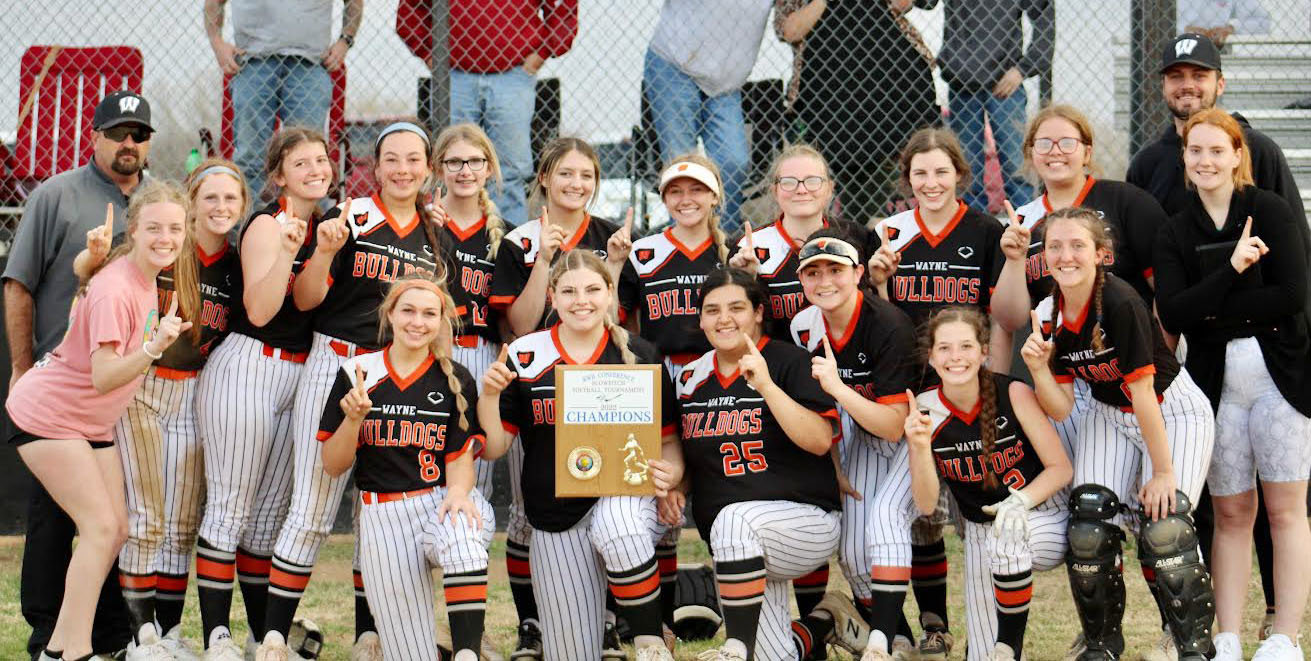 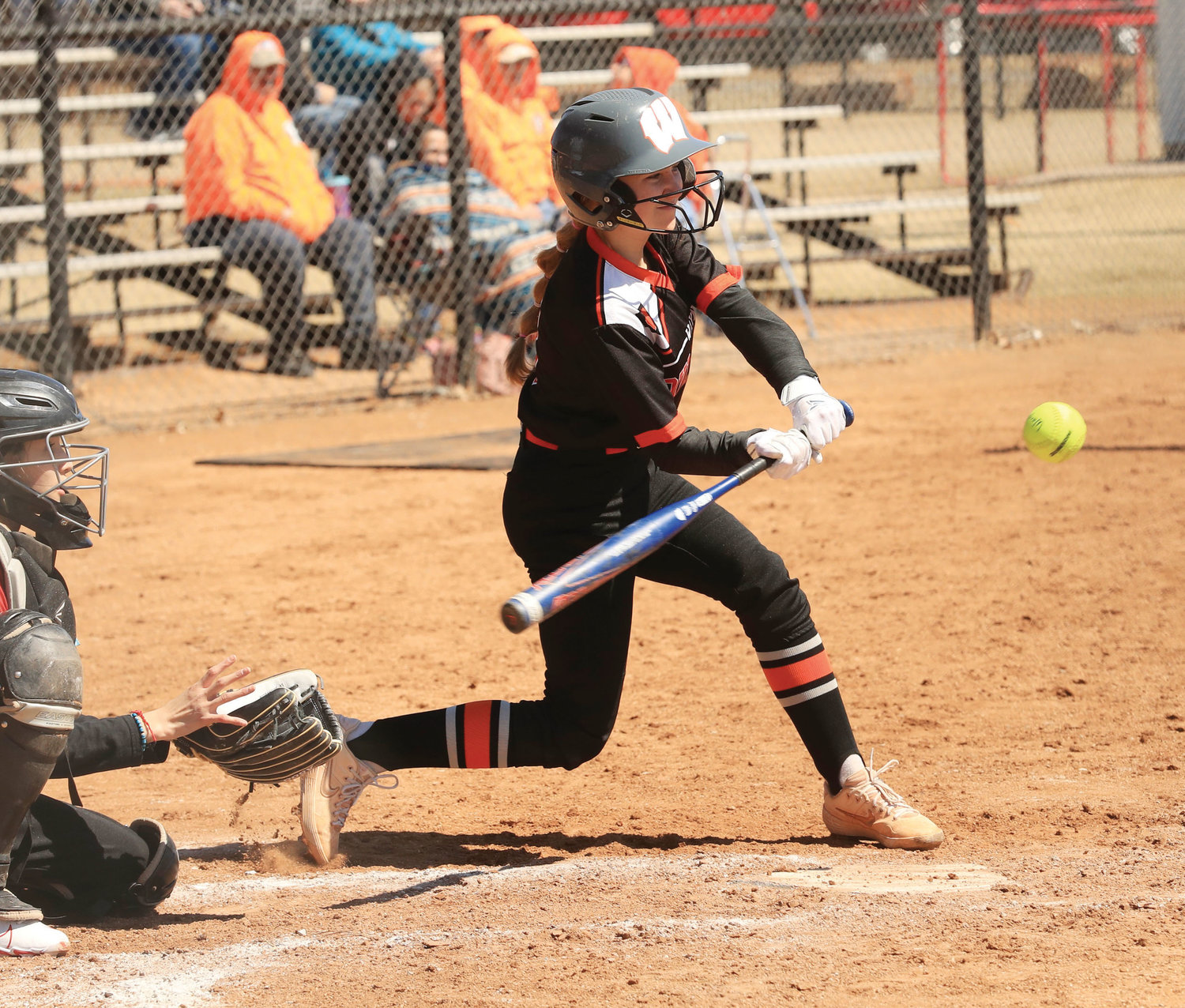 Wayne freshman Madi Sharp gets a hit during Wayne’s 25-0 win over Crooked Oak. Sharp has stepped into duty for the Bulldogs and is hitting it well at the plate.
Janet Moore 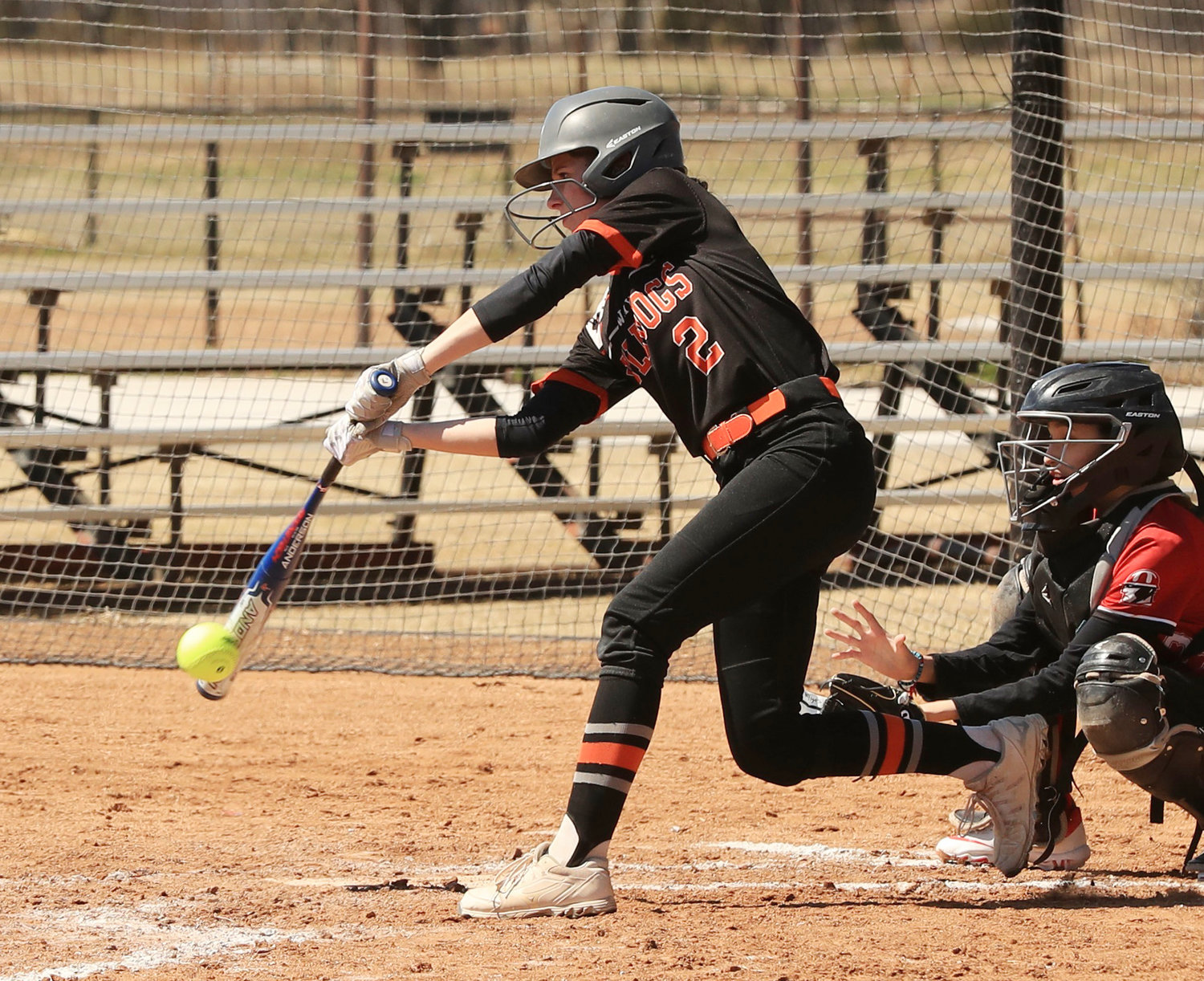 Tuesday afternoon they beat the Lady Wolves 14-13 to advance to the Championship game. Then they awaited their opponent who would, again, be Vanoss.

They beat the Lady Wolves a second time, 21-11, to claim the top title.

That win put their season record at 15-0.

The tournament started Monday when Wayne got a 28-12 win over Maud and an 11-7 win over Stratford. Those wins put them in the semi-finals with Vanoss Tuesday afternoon.

According to the coach, the Maud game was early and it took his team a couple of innings to get the bats going.

They pushed six runs across in the first inning and gave up just two to Maud.

Then things got rolling in the third as they added six more, and two in the fourth.

They rounded out their scoring with three in the sixth and 11 in the top of the final inning.

Faith Brazell was the leader at the plate with four hits. She had a home run in the first inning and a double in the third and two doubles in the seventh inning.

Jordyn Debaets had a long ball in the fourth inning.

In their second game on Monday, Wayne got an 11-7 win over Stratford.

“We played good defense and  hit the ball well. Our lineup one through 10 hit it well,” Durrence said.

Wayne jumped out with three runs each in the first two innings, allowing Stratford three in the bottom of the second.

The Lady Bulldogs added three more in the fourth. Then also one more in each of the final two innings.

Wayne tallied 20 hits in the win with Brazell and Haiden Parker leading the way with four each.

Kaylee Madden had a homer in the second inning. She finished the game with four ribbies and Brazell had five.

“Defensively, we’ve been making the routine plays. We back each other up and do the little things.”

Mantooth was in the circle for the win. She fanned three batters.

Durrence is pleased with his team so far. The seniors have stepped up at the plate as well as in the dugout, according to the coach.

He also mentioned freshman Madi Sharp. She was thrown in at right field when Emily Woody injured her hand.

“Madi is starting in right field and she has stepped up for us. She’s getting lots of experience and hitting the ball well.”

Woody will be out for six weeks and her injury forced a shift in duties. Jordyn Debaets, usually the right fielder, was moved to rover.

The Lady Bulldogs were scheduled to be in Lindsay on Thursday and Elmore City on Friday.

“So far we’re playing pretty well but we still have a lot to improve on. I’m happy to be playing well early and sitting where we’re at, but there is still lots of ball to play,” Durrence said.

They’re bats were as hot as it gets. Through five games they had 77 RBIs and 94 hits as a team.