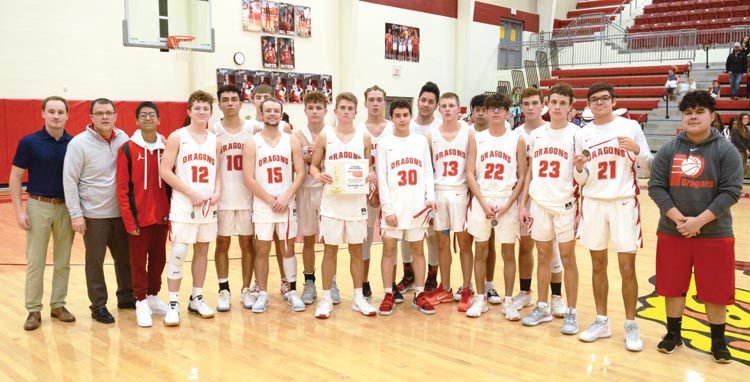 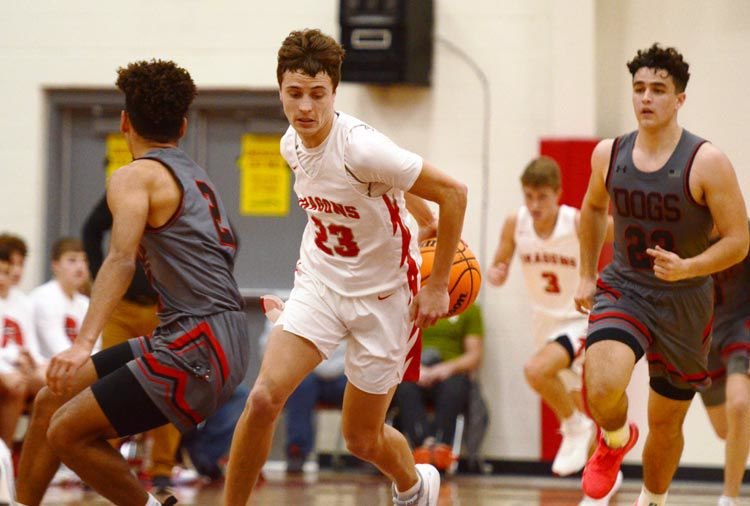 Mojo Browning takes the ball behind the back during a Purcell run out in their 48-44 win over Sulphur in the Heart of Oklahoma Basketball Tournament. Browning scored nine points in the semifinal game. 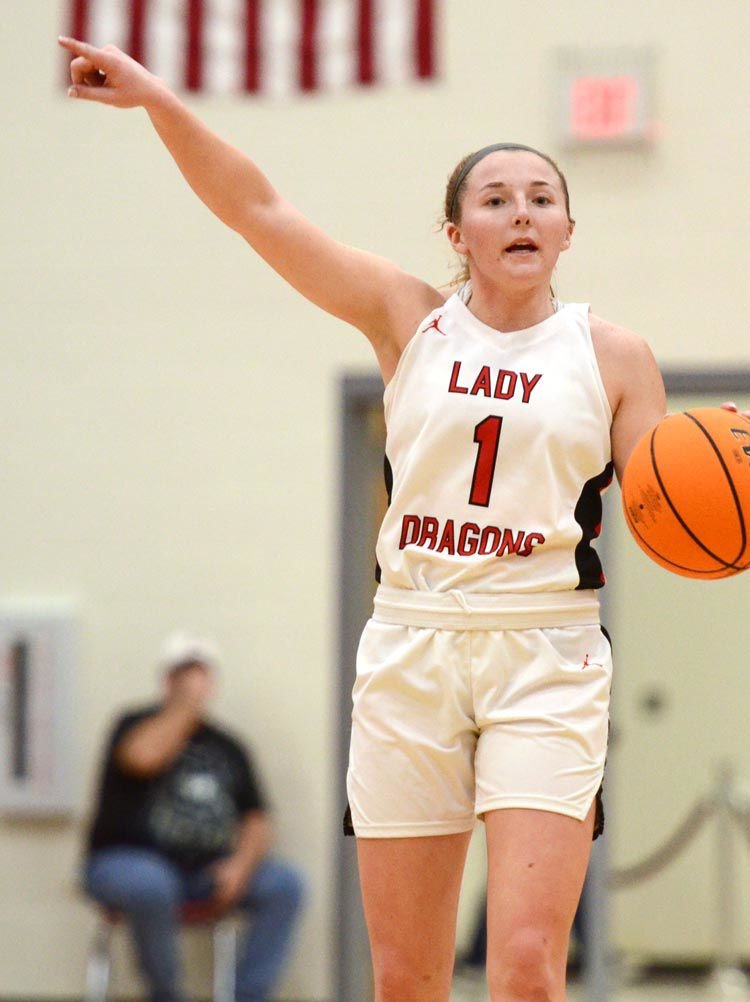 Alicia Baker quarterbacks the Purcell offense during the Heart Of Oklahoma Basketball Tournament. The Dragons were Consolation Champions in the tournament. 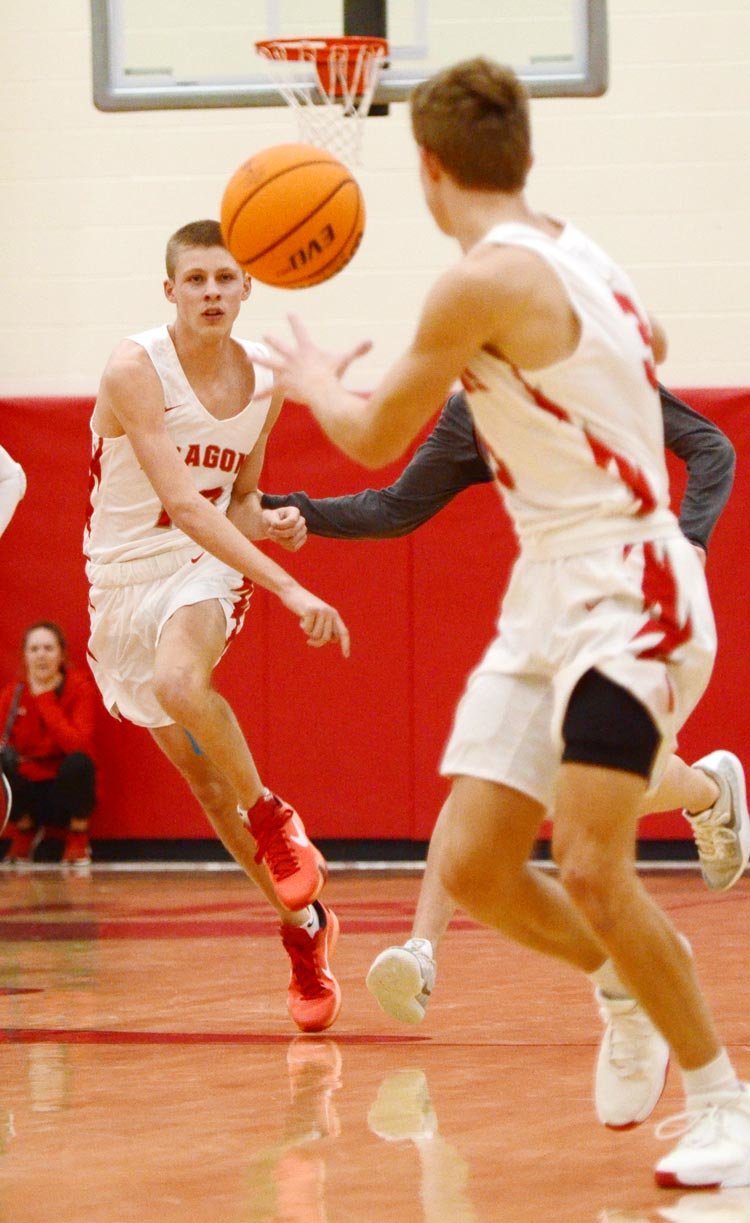 Kyle Ginn passes the ball up the floor to Gavin Nation during Purcell’s 48-44 win over Sulphur. Nation had a team-high 20 points for the Dragons. 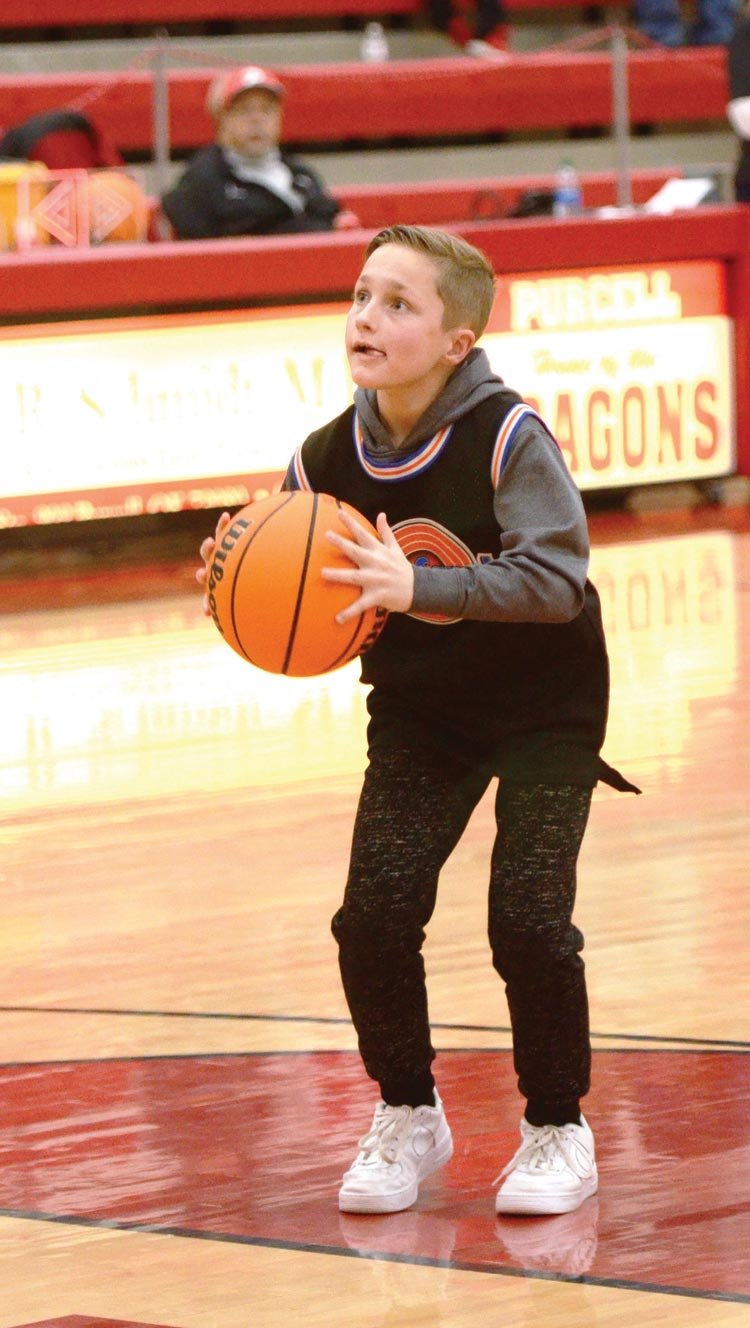 Cash Cook attempts a free throw during halftime of the Purcell boys basketball game in a fundraiser shootout at the Reimer Center.

Nate Willis’ buzzer beating deep three point bucket sent the Purcell crowd into a frenzy and knotted the finals match up with Mount St. Mary at 50-50 in the Heart of Oklahoma Tournament last Saturday evening.

But the Rockets ended up winning the tournament, 56-52, out-scoring the Dragons 6-2 in the overtime period.

It was Purcell’s 17th appearance in the tournament’s finals. They have six titles.

It didn’t look very promising to force the overtime frame with both Gavin Nation and Jorge Sotelo riding the pine after fouling out and only 6.62 seconds left with Purcell in bounding under the St. Mary goal.

Mojo Browning, who led the Purcell scoring with 17, brought the ball quickly up the court and passed to Willis who drained the 30 foot bomb.

Willis also finished in double figures with 14 points in the finale.

Browning, who scored 45 points in the three games led the Dragons’ offense.

Gavin Nation pumped in 39 points, Willis had 29 and Jorge Sotelo dropped in 26 points in the paint.

Purcell began the tournament with a heart-stopping 48-44 victory over Sulphur that was anyone’s game until Browning canned a pair of clutch charity tosses in the final 10 seconds to seal the victory.

Nation was the only Dragon in double figures against the Bulldogs leading all scorers with 20 points.

In the semi-finals, Purcell was 20-28 at the line including 16-19 at the charity stripe in the fourth period alone posting a 58-51 victory over the Bethel Wildcats.

The trio of Browning, Nation and Willis were all in double digits with Browning leading the way with 19 points. Nation splashed the nylons for 15 and Willis finished with 11 points.

“I’m very proud of this team and the fight they continue to show on the court,” head coach Roger Raper said.

“We were disappointed that we didn’t win, but as a coach I can see us moving in the right direction.

“We guarded really well all weekend and that is how we were able to win.

“Offensively, more players are stepping up and when we start shooting the ball like I think we are capable we have a chance to be a scary opponent,” Raper concluded.

The Dragons came up on the short end of a 59-56 count at Washington earlier last week. Browning led Purcell with 20 points while Nation and Sotelo both finished with 11.

The Dragons took a 12-4 season record to Davis Tuesday night. Purcell is scheduled to play at Pauls Valley Friday night and at Bridge Creek next Tuesday.

Purcell came up short in the first round losing to Byng 56-35.

But they bounced back and zoomed past Tishomingo, 63-29 with Baker pumping in 32 points. Keith was also in double figures with 15.

The Dragons jumped out to a 30-13 lead by halftime and polished off the Lady Indians with a 23-5 fourth period romp.

Baker and Keith both hit double digits in the consolation final, a 49-46 victory over a talented Bethel club.

Baker led all scorers with 18 while Keith singed the nets for 14.

The Dragons had a cold shooting night at Washington earlier in the week, dropping a 48-28 contest.

“We came into the tournament not playing well,” head coach David Sikes said. “We had lost two in a row and our shooting had been very poor. But we came out red hot against Byng and in the end our size killed us. They pounded the ball on the inside.

“Friday’s second round game was great for us,” Sikes said. “We came out and played extremely well.

“We got some confidence back. Baker had an awesome game racking up 32 points and 16 boards. We played like I know we are capable.

“We knew Bethel would be a battle. We beat them by one point in the Byng Tournament. It was a hard fought game. They are a talented team.

“Overall, we had a good tournament and hopefully gained some confidence for the road ahead,” he concluded.

Purcell has 16 appearances in the tournament’s championship gave with nine titles.

Purcell was 9-7 heading into Tuesday night’s game at Davis.