All tickets must be purchased online 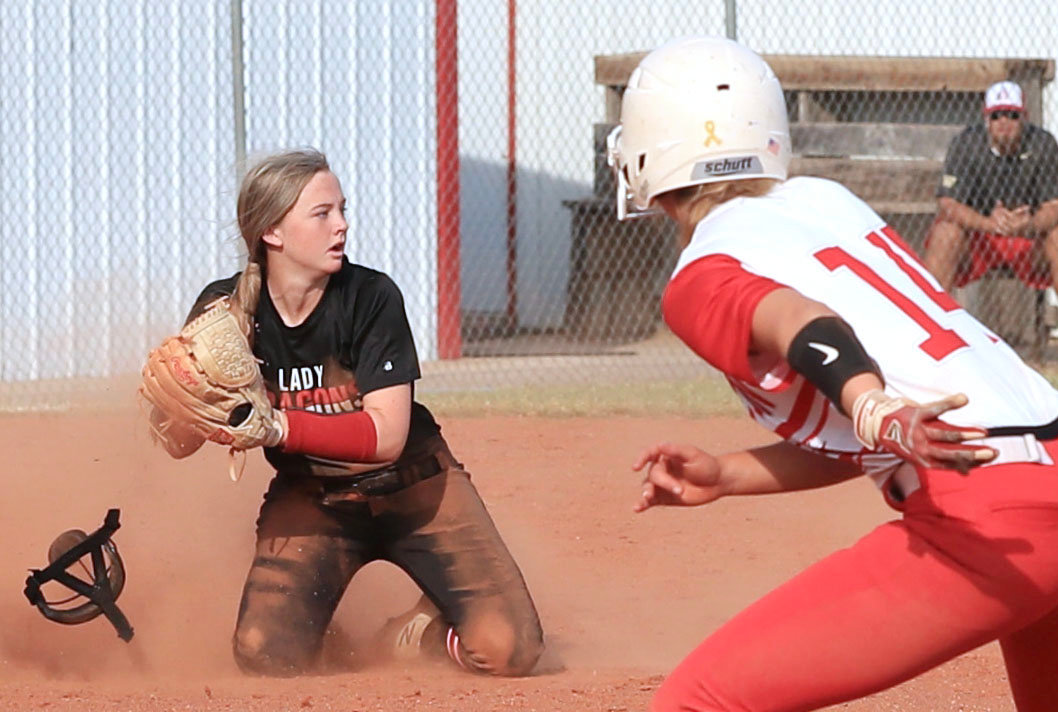 Purcell junior Lauren Holmes throws to second base for a double play after making a fantastic catch in the infield against Washington. The Dragons were defeated 9-0.
Janet Moore
Posted Thursday, September 30, 2021 9:00 am
John D. Montgomery

Purcell opened the tournament with Alva at 11 a.m. Wednesday. Davis and North Rock Creek are on the other side of the bracket with the winner advancing to State.

“It’ll come to who hits the ball with runners in scoring position. We’ve been leaving too many people on base lately,” Jones continued.

“We need to just go out and have fun, not make mistakes and make the routine plays.

“Having the Regional at home is a blessing and a curse. We hope we can take advantage of our fan support that we have had all season and have quality at bats.”

All tickets to the tournament must be purchased online at OSSAA.COM. No tickets will be sold at the site.

A complete bracket is in this week’s Purcell Register.

Purcell rode the pitching arm of freshman Ella Resendiz last week in a 3-0 victory over Dibble.

Resendiz tossed a two hitter at the Lady Demons while striking out six.

Payci Constant also had a double in three trips to the plate.

Savanna Edwards was 1-3 with an RBI. Haileigh Smith also had an RBI in a 1-3 performance at the plate.

Hannah Whitaker and Kenna Esparza both had a hit in three plate appearances.

After that last week Purcell’s bats went icy cold in losses to Latta, 9-4, and Washington, 9-2.

Purcell started out hot against the Lady Panthers pushing across four runs in the top of the first led by Resendiz’s two run double.

But that was the last scoring of the game for the Dragons, who struck out eight times.

Purcell managed only two hits against Washington, one each by Edwards and Whitaker.

The same was true Monday when Lone Grove limited Purcell to three hits in a 10-0 run-rule victory.

Holmes doubled and coach Sarah Jones got singles from Brynley Jennings and Esparza.