Pick up victories over Pauls Valley and Vanoss 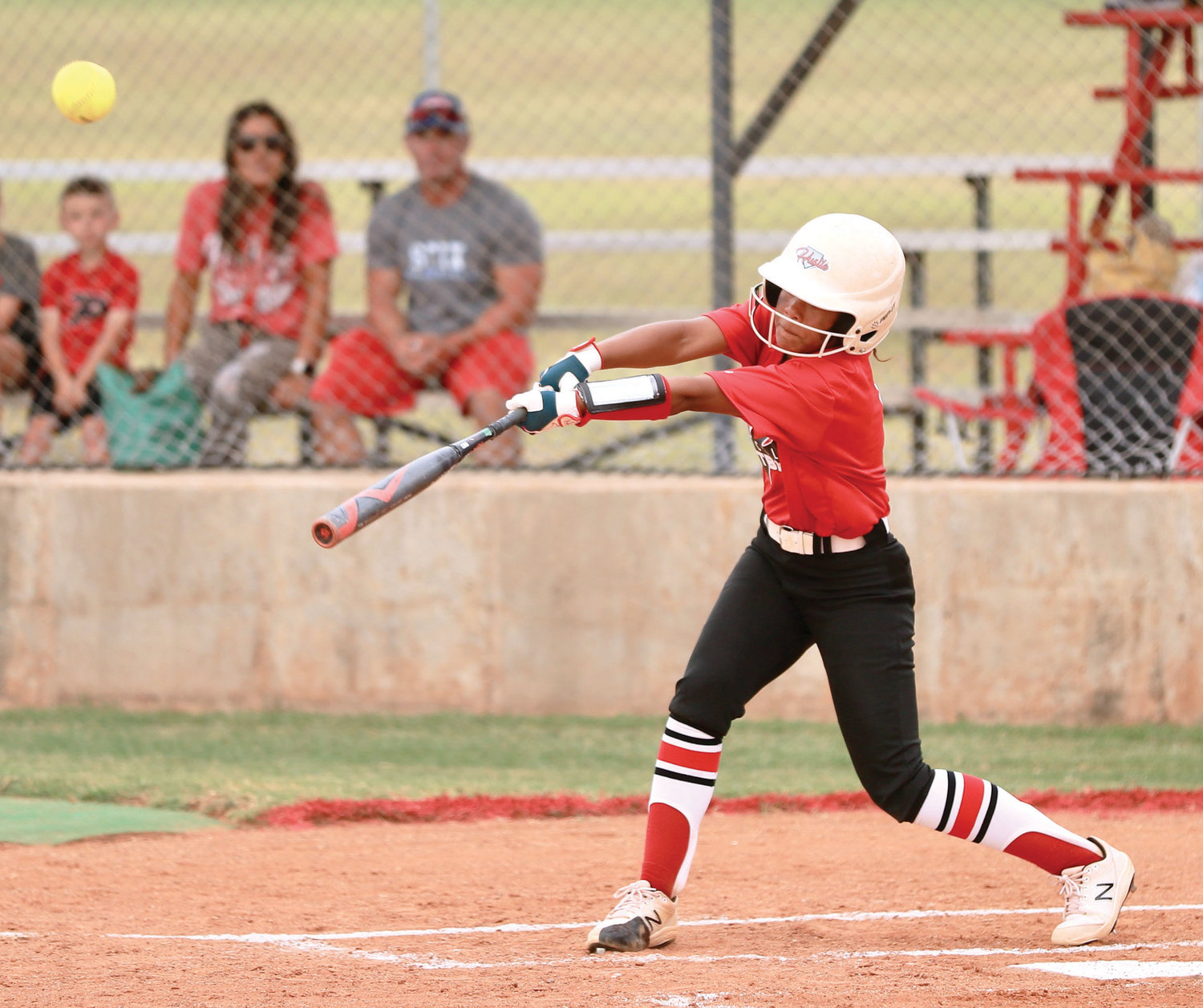 Purcell freshman Coty Sessions watches a ball off her bat in what would eventually lead to a three-run bonanza for the Dragons. Purcell heads to Tuttle today (Thursday) before heading into the Plainview tournament this weekend.
Janet Moore
Posted Thursday, August 26, 2021 9:00 am
John D. Montgomery

Led by Ella Resendiz’s four RBIs, Purcell won their seventh game of the season Monday at home in a 4-0 victory over Vanoss.

Resendiz went 2-3 at the plate and knocked in all four of the Dragon runs.

She also pitched three innings fanning two and giving up one hit. Coty Sessions was the winning pitcher. She tossed four innings, striking out three and giving up two hits.

Savanna Edwards had a triple in the game and KK Eck had a single.

The game was deadlocked at 0-0 heading into the bottom of the third when the Dragons pushed across a pair of runs. They added two insurance runs in the fifth.

“This was a great win for us,” head coach Sarah Jones said. “I am beyond proud of the girls.

“This is one of the better pitchers that we have faced besides the Washington pitchers and the girls did really well. Ella Resendiz came up with all 4 of our RBI’s and we made Vanoss defense work. We still could have pushed more runs across, leaving seven runners on but we had quality at bats, so we are getting better,” she said.

In Purcell’s 8-5 victory over Pauls Valley in the Murray County Festival last weekend, Edwards carried the big stick for the Dragons going 2-3 at the plate and knocking in a pair of base runners.

Eck was 2-2, including a triple, and had two RBIs. Resendiz was also 2-2, that included a double, and had an RBI.

Brynley Jennings lined an RBI double and Hadleigh Harp had an RBI single.

Hannah Whitaker, who was the winning pitcher, teamed with Sessions in the circle. Both pitchers struck out two Lady Panthers and each gave up four hits.

“We got down early in the first but we responded slowly,” Jones said. “We both had eight hits but our timing was perfect in the second and third innings to fight back.

“Defense again was a little rocky but we didn’t give up. We had quality at bats and only left three people on base.”

Purcell dropped three games in the Murray County Festival, losing 7-2 to Washington and losing a pair of one-run affairs, 4-3 at the hands of Sulphur and 5-4 to Norman High.

“Washington got the clutch hits when we didn’t,” Jones said. “We left too many people on base (seven).

“We had the bases loaded twice and didn’t come up with a clutch hit. I have full faith in these girls in being prepared to have a different outcome when we play them later in the season.”

The Dragons jumped out to a 3-love lead against Sulphur but they responded with a pair of runs in both the bottom of the first and in the second to nip Purcell by a run.

Harp was the leading hitter for Purcell in that game with two hits and had a pair of RBIs.

“Sulphur was a tough game across the board,” Jones said. “We were not where we needed to be mentality to play that game. We hit the ball pretty well but again defense got us. Six errors in three games is not OK,” she said. “We will see Sulphur again next week and are prepared for a rematch.”

Purcell also led the Lady Tigers pushing across two runs in the top of the first. But Norman came back to score a run each in the third and fifth frames but it was the fourth where they did the most damage, scoring three times.

In that contest, Eck went a perfect 3-3 including a double. Lauren Holmes had an RBI double and Resendiz doubled and had two RBIs.

“This week is a good week of competition that we desperately need and I am excited to see what the girls do with it. We have added a game Tuesday with North Rock Creek. We will head to Tuttle on Thursday and then have the Plainview Tournament on Friday and Saturday. We face Healdton in our first game at 11:30.”

Next week Purcell will host Sulphur on Monday beginning at 6 p.m.