Tracy Scott: “As a whole we’re all getting better.” 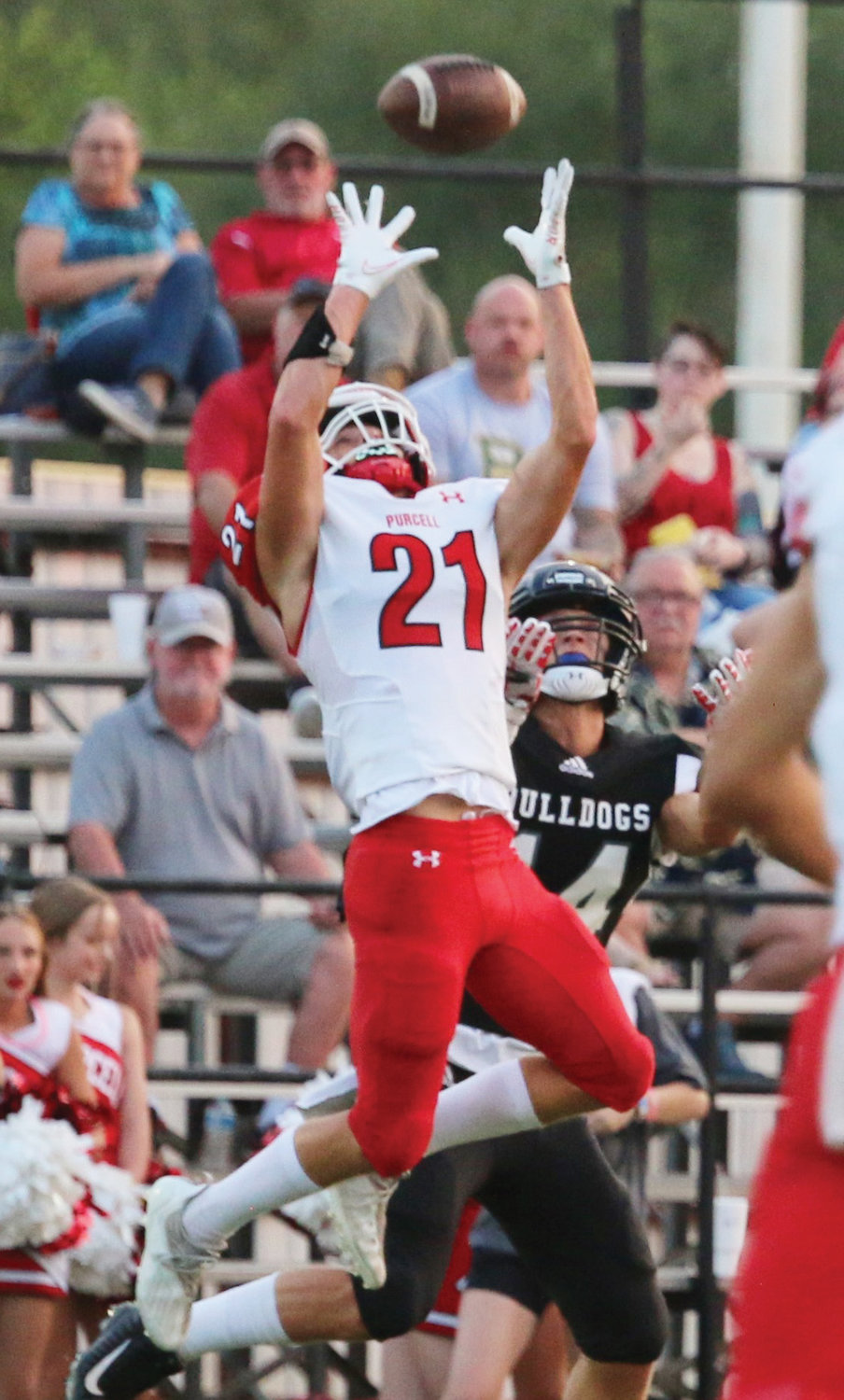 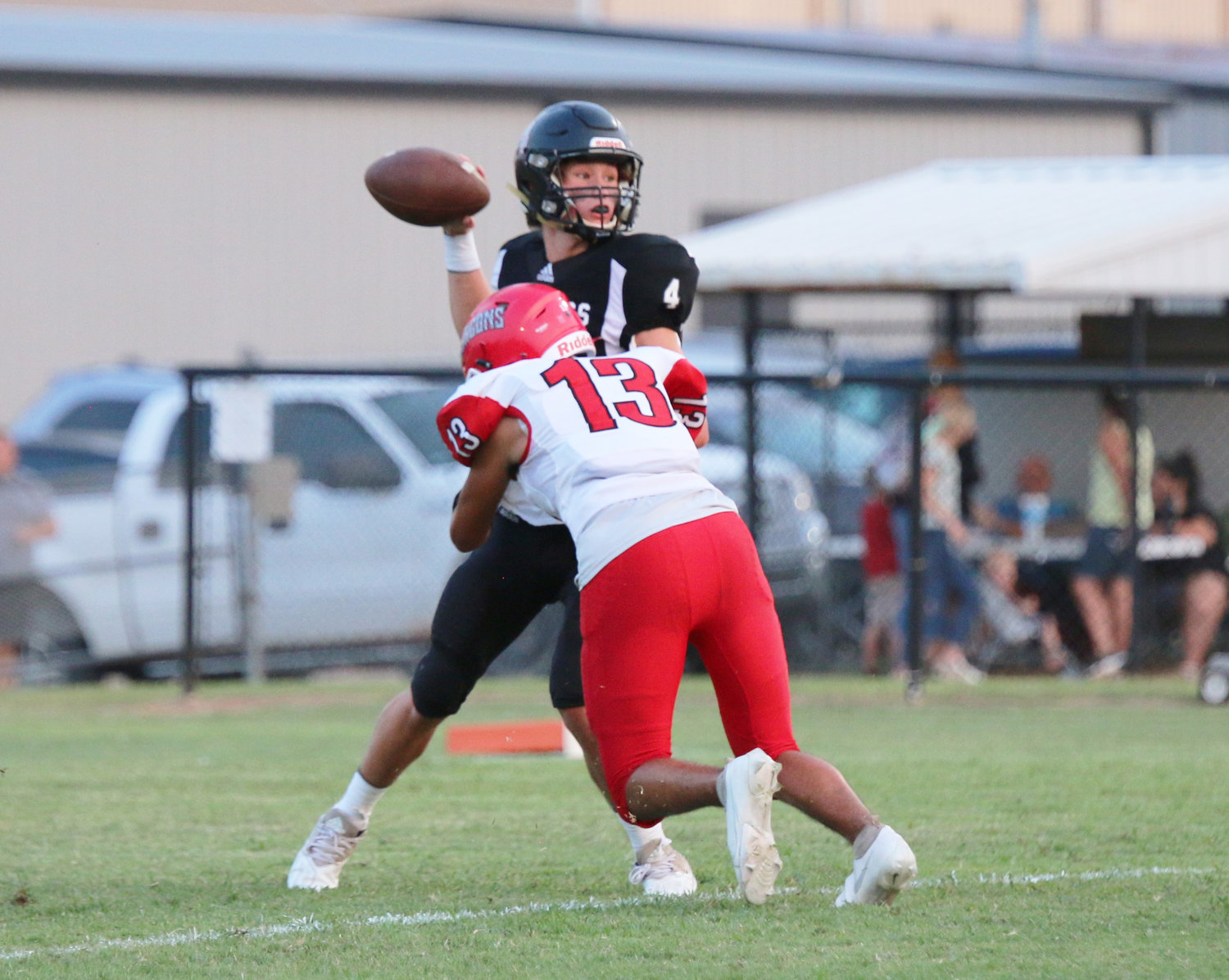 Purcell junior Jose Ochoa applies pressure to the Meeker quarterback Friday night during Purcell’s 32-18 win over the Bulldogs. Purcell is off this week and will play at Washington next week.
Traci Cook
Previous Next
Posted Thursday, September 16, 2021 9:00 am
John D. Montgomery

Meeker’s Bulldogs ran into a buzz saw in Purcell senior Creed Smith last Friday night when the Dragons pinned a 32-18 loss on the Bulldogs.

Smith and his improving buddies are now 2-1 with a bye week this Friday night.

Smith led the team with 13 tackles on defense and was in on all five Dragons touchdowns on offense.

He had three sacks last Friday two for minus seven yards and one for minus six. Fellow senior Zicorrie Davis was right on Smith’s heels recording 12 tackles. Kash Guthmueller made eight tackles and Brodrick Smith was credited with seven stops and recovered a fumble.

Titus Mason made six tackles, intercepted a pass and broke up three other Meeker pass plays.

On the offensive side of the ball Smith tossed two touchdown passes. He and Mason got the scoring going with an 18 yard hookup in the opening quarter.

Smith scored three times on the ground, the first one a 14 yard scamper in the opening period. He followed that up with a 47 yard touchdown strike to Mason as the first stanza wound down.

“Obviously Creed played well. Titus played well also,” the coach said. “The offensive line has gotten better. We still have a ways to go but we’re taking steps in the right direction.”

“We’re getting better on both sides of the ball,” Scott confirmed. “That’s what we’ve got to keep doing. As a whole, we’re all getting better. I was pleased with the effort against Meeker. The kids got after it.”

With Friday night off, the Dragons had a bit of a different week of preparation.

Monday they had a very light workout, just doing some stretching and some running.

Tuesday was reserved for an entire practice on offense with only defense working on Wednesday.

“We went back to the fundamentals this week taking care of things we need to work on,” Scott concluded.

Purcell Head Coach Tracy Scott nominated Creed Smith as the Offensive Player of the Week. Smith rushed for 136 yards and three touchdowns and finished with 134 yards passing and a pair of touchdowns.

Line coach Kurt Gray nominated both Jace Clary and Carter Goldston as the Offensive Linemen of the Week. They both graded out at 75 percent against the Bulldogs.

Nominated as the Defensive Player of the Week was Zicorrie Davis, who made a dozen tackles against Meeker last Friday night.

Tavian Engert was nominated as the Defensive Lineman of the Week. He made five tackles against Meeker.