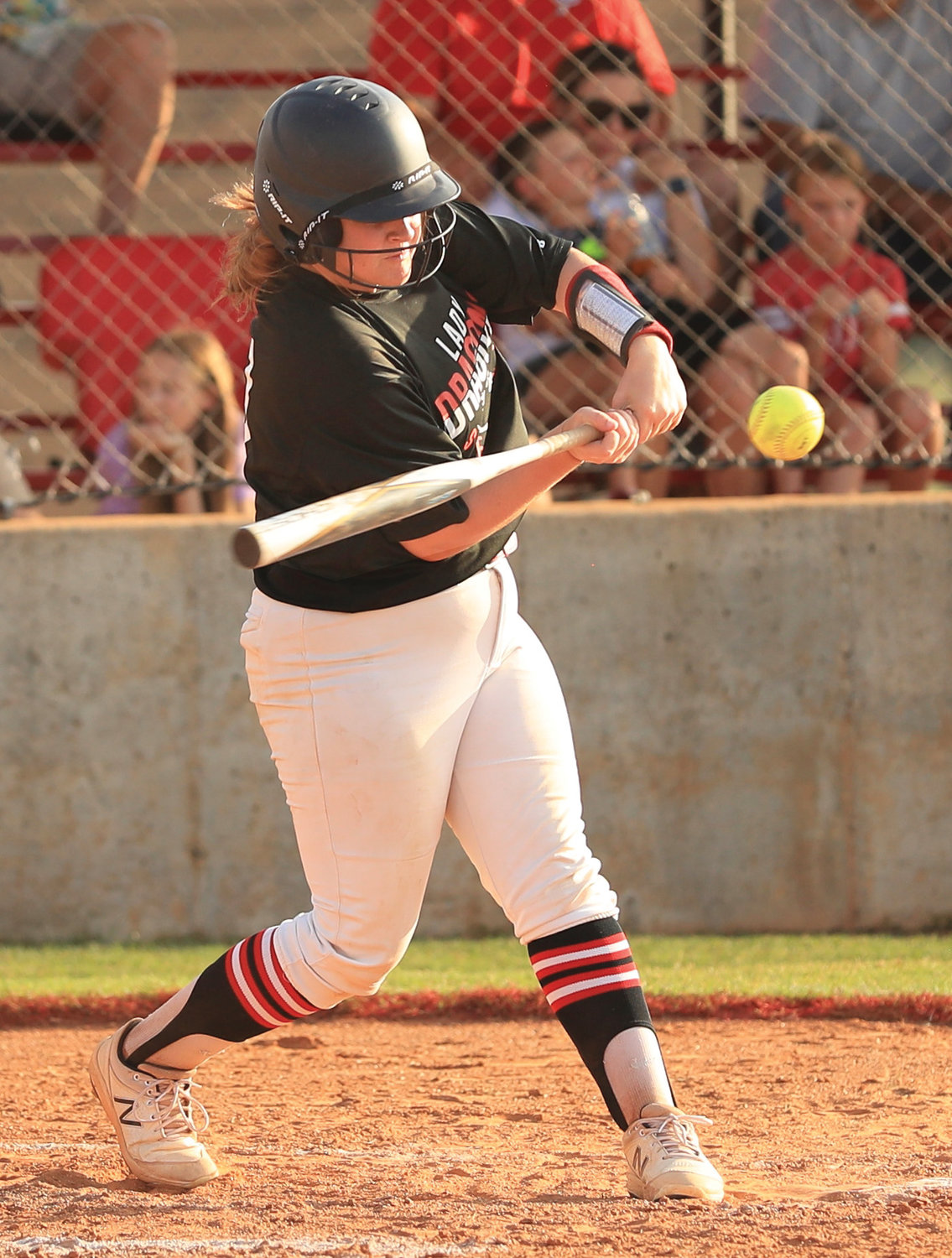 Purcell senior Haileigh Smith hits a single Monday against Crooked Oak. Purcell won back to back games, 18-0 and 17-0.
Janet Moore 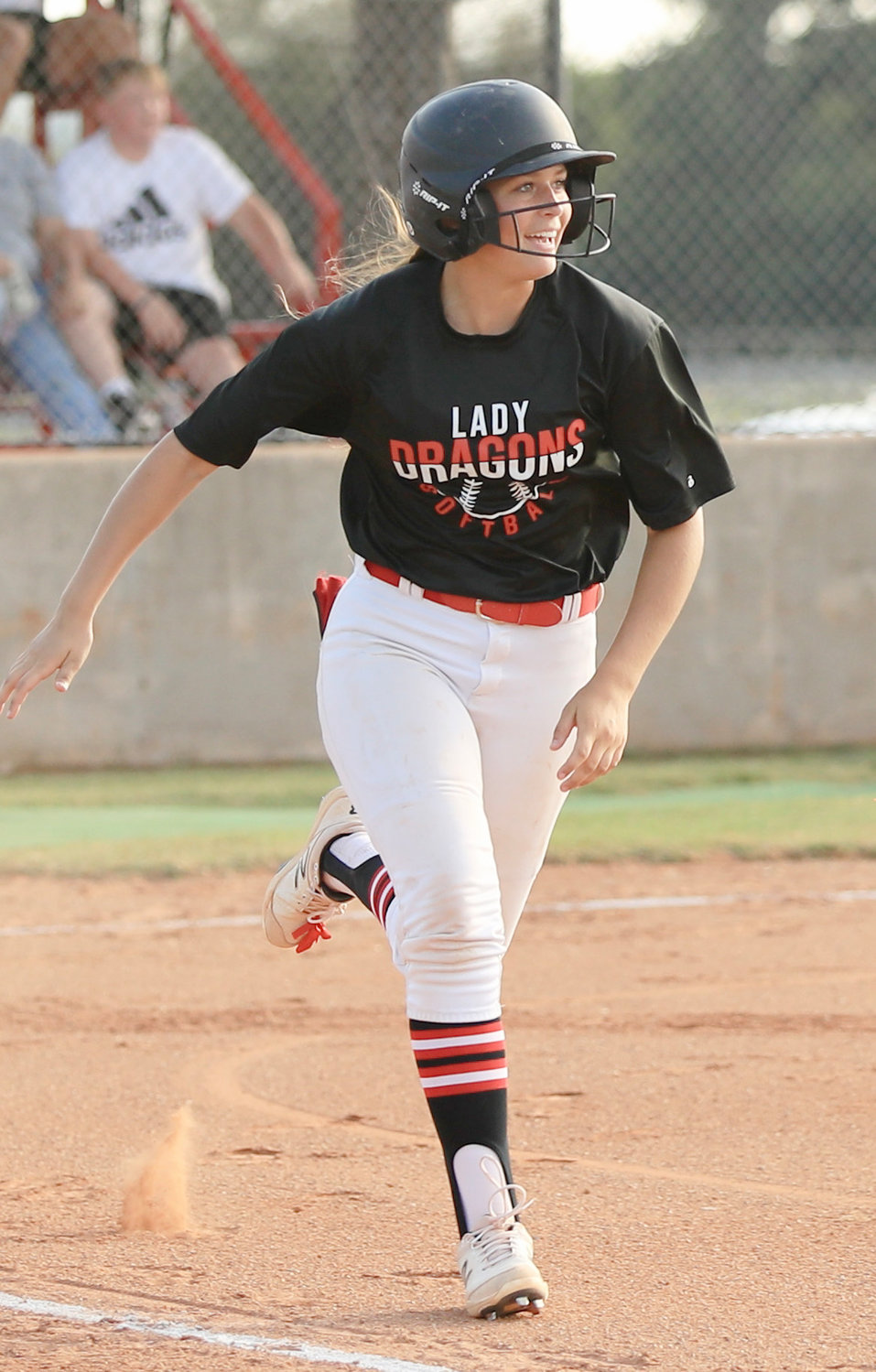 Purcell sophomore Savanna Edwards smiles as she watches a ball she hit Monday. Edwards doubled on the hit and Purcell picked up two wins over Crooked Oak, 18-0 and 17-0, while clinching a District title.
Janet Moore
Previous Next
Posted Thursday, September 23, 2021 9:00 am

This young group may have had some peaks and valleys along the way but when it comes down to it, they are ready to fight and make a bigger name for Purcell softball”
Sarah Jones, Purcell head coach
John D. Montgomery

With District victories over Chandler and Crooked Oak this week, Purcell finished league play at 10-2.

The two head-to-head victories over Chandler paved the way to the District Championship with both teams finishing 10-2 in conference play.

The Dragons shut out Crooked Oak twice Monday with 14-0 and 17-0 run-rule victories.

Ella Resendiz and Hannah Whitaker both had grand slams in the 14-run first inning of the opening game.

Resendiz, who was the winning pitcher, went 3-3 and had six RBIs while Whitaker had four RBIs.

Savanna Edwards spanked an RBI double in the game.

Whitaker, who picked up the victory in the circle in the nightcap, smacked a home run with Resendiz aboard to finish with a pair of RBIs.

Resendiz was 2-2 including a double and had two RBIs.

Tinley Winters and Kailynn Helton were the RBI leaders both with three. Kelly Anderson had an RBI and Payci Constant was 1-1 at the plate with a pair of RBIs.

In a crucial district match up last Thursday, Purcell pinned a 6-3 road loss on Chandler.

The Dragons stole the show in the top of the fourth when they scored five big runs highlighted by Lauren Holmes’ home run. She was 2-3 at the plate and knocked in two base runners.

Kenna Esparza was a perfect 3-3 on the day with two RBIs.

Coty Sessions got the victory in the circle with relief assistance from Resendiz.

The Dragons took a pair of losses last week, coming up on the short end of an 11-3 contest with Ampo and getting edged at Bethel 4-3.

Savanna Edwards had a big game at the plate in the Ampo loss. She went 2-4 including a double and a dinger and knocked in two base runners.

Resendiz had a double in three trips to the plate.

Eck went 2-4 against Bethel. Edwards matched her 2-4 performance that included a triple and an RBI.

“We almost put ourselves in a bind in Districts when we took the loss to Bethel last week,” Jones said.

“It was vital that we beat Chandler and then Crooked Oak Monday night in order to be District Champs.”

The Dragons will host the Regional Tournament September 30 and October 1.

The field is yet to be determined pending the outcome of bi-districts this weekend, Jones reported.

“This young group may have had some peaks and valleys along the way but when it comes down to it, they are ready to fight and make a bigger name for Purcell softball,” the coach said.

The Dragons were scheduled to host Dibble on Tuesday and travel to Latta today (Thursday). They are ticketed to play at Washington Friday beginning at 4 p.m.

“I want to say how proud I am of the junior high Lady Dragons,” high school head coach Sarah Jones said.

“Coaches Mandy Clay and Samantha Sikes ended their first junior high season and made such an impact on our team,” Jones continued.

“From their first practice and game to where they ended is a transformation everyone should have witnessed. Great job both to the coaches and players,” Jones concluded.