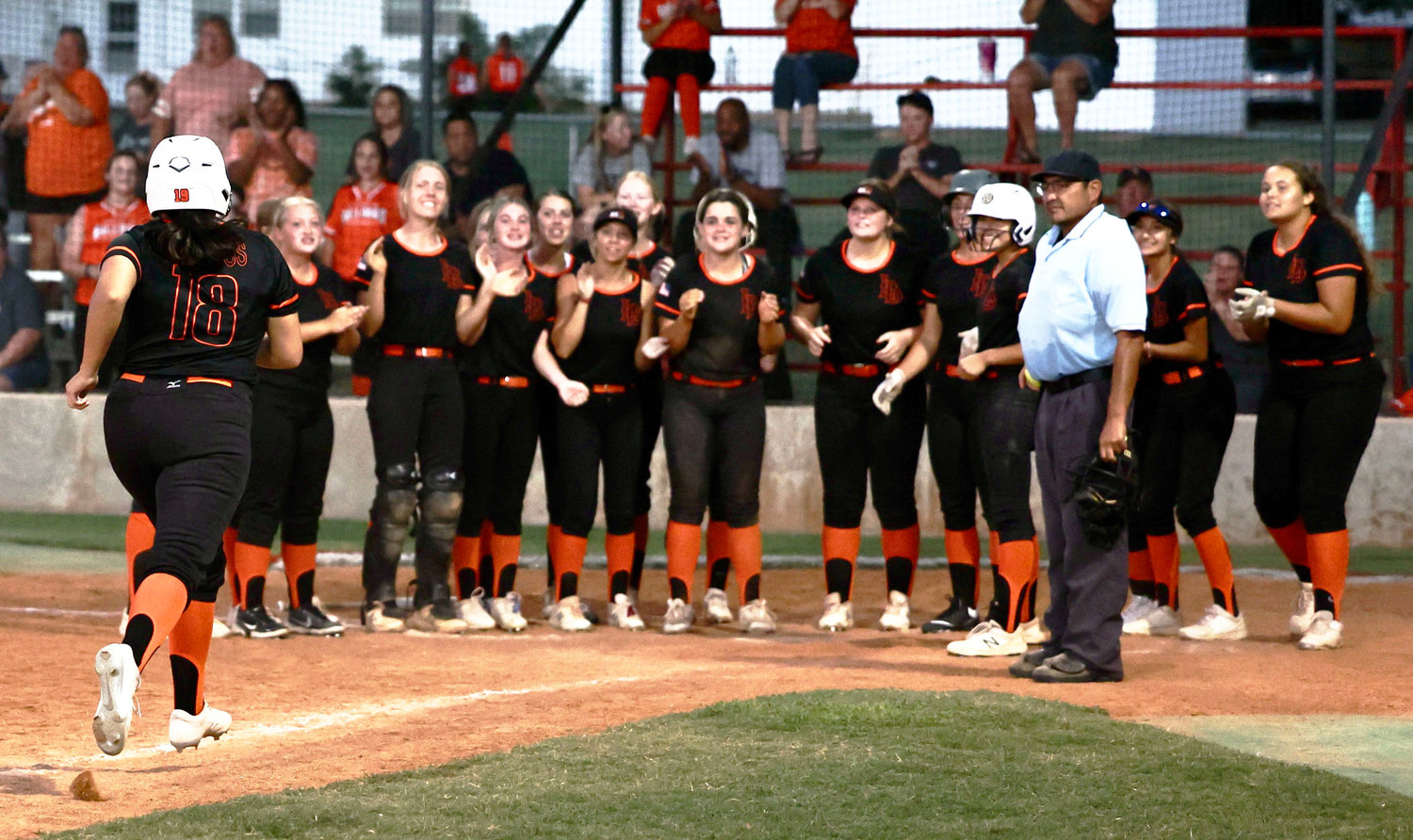 The Lexington Bulldogs wait for Cora Vasquez to cross home plate after she hit a three-run homer in the seventh inning against Purcell. The Bulldogs defeated the Dragons 8-6.
Janet Moore
Posted Thursday, September 22, 2022 9:00 am
Emily Montgomery

Monday night was round two of the Battle for the Bridge in Purcell.

The Lady ‘Dawgs got a late 3-run homer from Cora Vasquez to win the game, 8-6.

Lexington was up 4-0 in the top of the fourth when Purcell pushed two runs across and got on the board.

Down 6-4, Lexington had to have runs in the seventh and they delivered with Vasquez’s long ball.

Lexington had nine hits in the game, led by Brodie Anderson’s two.

Izzy Pack was in the circle. She fanned three batters.

Down 1-0 through two innings, Lexington scored three runs to take the lead.

But, Little Axe added three of their own in the fifth.

The Lady ‘Dawgs scored one more in the top of the 7th to tie the score at four-all, sending the game to extra innings.

Lex scored two in the top of the ninth and held the Lady Indians in the bottom to seal the win.

Cora, Kieley Givens and Maison Sissney each had two hits while KK Vazquez, McKenzie Manuel, Kora Parker and Anderson had one apiece.

Sissney homered in the win also.

Last Thursday, Lexington was in Pauls Valley where they got a commanding 11-4 win over the Lady Panthers.

Lex had 10 hits in the win, led by KK’s three and Cora and Anderson’s two.

Cora was in the circle for the win. She fanned seven batters.

Last Tuesday was a big district showdown with Chandler. But, Lexington couldn’t get their bats going and fell 16-0.

The loss moved Lexington to second place in the district.

The Lady ‘Dawgs had two hits, one each from Anderson and Sissney.

The Lady Lions kicked things off with a three run homer in the first inning and they piled it on each inning after, including nine runs in the fourth.

To finish out their week, Lexington hosted Little Axe on Tuesday and Western Heights today (Thursday).

Regionals begin September 29 and assignments were not out as of presstime.