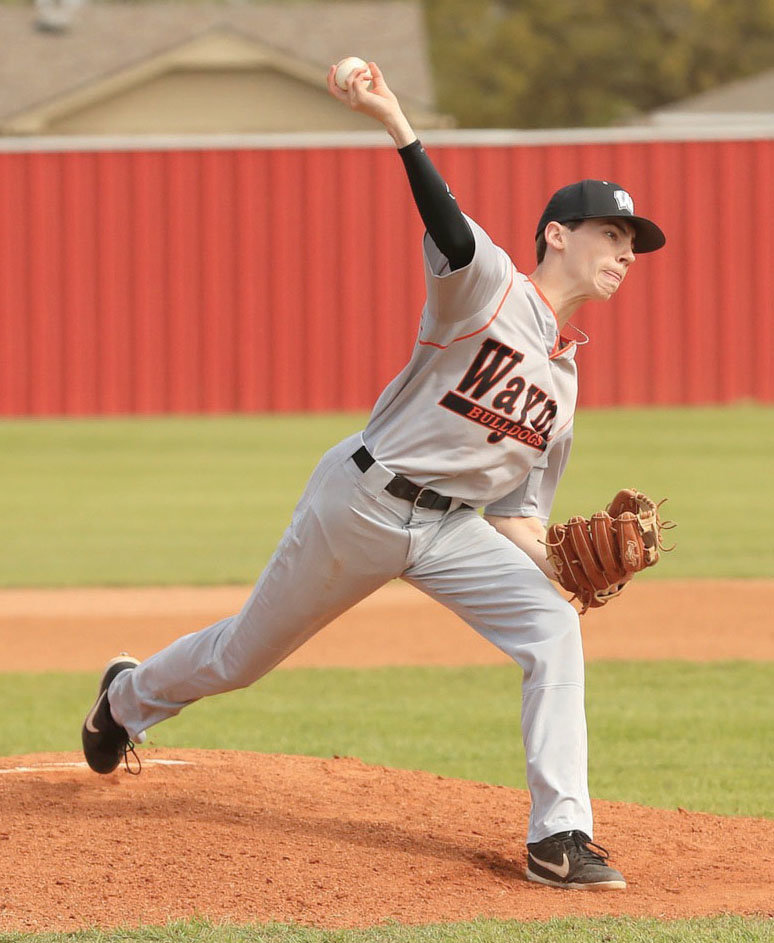 Wayne junior Kaleb Madden fires a pitch to the dish for the Bulldogs. Wayne’s season ended in the District tournament after a loss to Caddo.
Janet Moore
Posted Thursday, April 28, 2022 9:00 am
Emily Montgomery

The Bulldogs were in Caddo last week for the District tournament. They got a 12-2 win over Vanoss. But, two losses to Caddo (13-0 and 10-0) put an end to their season. The Bulldogs finished with an 8-14 record.

“The Vanoss game was one of our best played games all year. We hit the ball when we needed to,” head coach Shane Collins said.

The coach called out Rhett Kennedy and Jaxon Dill for their play in the Vanoss win.

“Rhett played well at catcher, even throwing a couple guys out at second. And, Jaxon pitched the whole game for us. He was great on the mound.”

Wayne had double digit hits in the win.

Ethan Mullins’ three-run triple in the third inning with three outs and Lane Jones’ two-run double in the fourth inning were bright spots for the Bulldogs at the plate.

The Vanoss win sent Wayne on to play host Caddo. They lost both games.

“We played hard, but Caddo is just good baseball team. We shot ourselves in the foot early with errors and walks in the first game.”

The Bulldogs didn’t scratch in either game with Caddo, but Collins was pleased with the effort from Kennedy and Kaleb Madden.

“Kaleb got on base every time and Rhett continues to play well for us,” Collins said.

Despite finishing their season in the District tournament, Collins and his team are excited about the future.

“I’m expecting everyone to come back and we’ll have some freshman out to plug in to replace the seniors we lose. We’ll try to get them some reps during summer ball,” Collins said.

The Bulldogs will lose four guys to graduation. They are Jr. Perez, Braxton Smith, Andy Lee and Mullins.

Three guys, Perez, Lee and Mullins, have been four-year starters for Wayne. And Mullins has been the Golden Glove winner for the past four years.