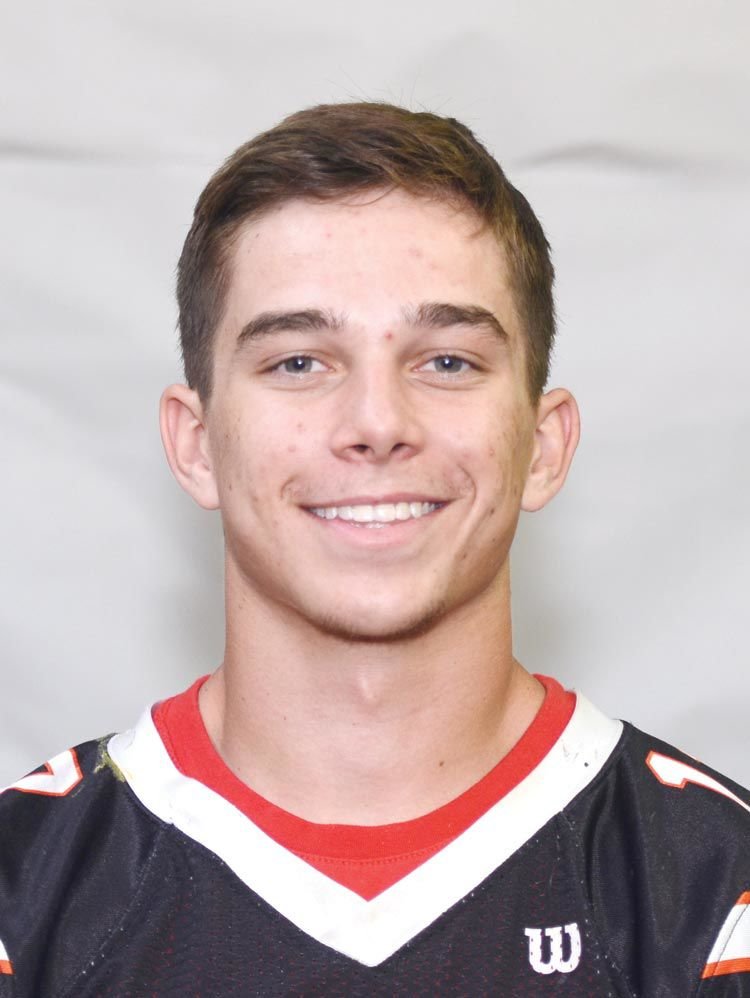 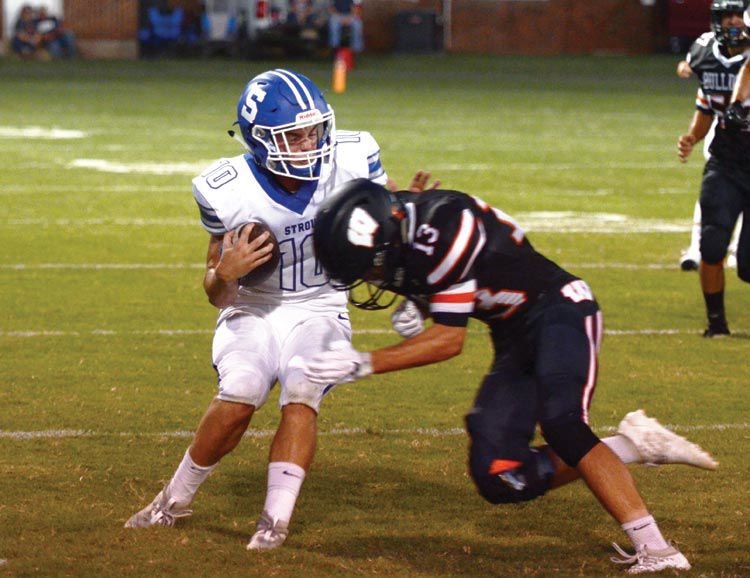 James Spencer lowers the boom against a Stroud ball carrier this past season. Spencer ended his senior season for Wayne as the district’s Safety of the Year. He recorded 76 tackles and had one sack and three interceptions. For his career with the Bulldogs, Spencer had 227 tackles, three sacks and 10 interceptions.

Wayne football player James Spencer had a wild and wacky – yet very memorable – senior season for the Bulldogs.

Spencer was a defensive back for the Bulldogs in 2019. After starting the season 0-3, Wayne won the rest of its regular-season games. The Bulldogs beat Savanna, 33-14 in the first round of the OSSAA Class A Playoffs. Wayne’s season came to an end the next week with a 44-21 defeat to Pawnee.

Things didn’t look so good for Wayne at the beginning of last season. A handful of stout starters were out with injuries – including Spencer, who tore the ACL in his right knee during a scrimmage before the regular season started.

“We had a really rough start last year,” Spencer said. “In the beginning, we had a bunch of guys get hurt. We had four starters get hurt at the very beginning of the season. We started the season 0-3 and it was looking really rough for us.

“But, once we got back on our feet and we were healthy, we started pulling together and we had a great season. I’ve never seen a group of guys come together so much and become one unit as I had this year.”

After the injured starters made it back into the starting lineup, things were good from then on.

In the fourth game of the season, the Bulldogs beat Mounds, 69-49. Sophomore quarterback Ethan Mullins had a career game, throwing for a whopping 523 yards and eight touchdowns.

“That was such an amazing and memorable game for me,” Spencer said. “I just loved watching Ethan grow as a player last year. And, as much as I love him, our offensive line did so well protecting him the whole year. I really didn’t expect them to play like they did. They were really a force to reckon with this past season.”

Despite his painful ACL injury, Spencer looks back on last season with a lot of positive thoughts.

“I tore my right ACL and things weren’t nearly as impressive as I would like them to be,” Spencer said. “I was out for the first two games last season. It was probably the most challenging experience that I’ve ever had both mentally and physically that I’ve ever had. But, it made me such a better person. If you can play through that, you feel like you can just about live through anything.”

It was definitely a struggle for Spencer to make it through every game but he did it like a champ.

“My knee was swollen after every game,” Spencer said. “You couldn’t see my knee cap. I had to ice my knee after every game. Saturdays were really rough because walking was really difficult.”

Spencer ended his senior season for Wayne as the district’s Safety of the Year. He recorded 76 tackles and had one sack and three interceptions. For his career with the Bulldogs, Spencer had 227 tackles, three sacks and 10 interceptions.

“James was the heart and soul of our team last year,” Wayne Head Football Coach Brandon Sharp said. “He was the team leader going into the season and he worked his tail off. He had a great off-season and a really good summer camp. He was living in the weight room all summer.

“He came into the season really fired up. In the first scrimmage, he tore his ACL. Most kids would be down and out and just devastated. But, he was a stud through the whole thing. He kept leading the team and he showed his true character.”

Sharp was very proud of Spencer’s ability to stay in the lineup and keep the team on track.

“He kept our guys up,” Sharp said. “We struggled early on in the season while he was out. Once he got back into the starting lineup for us on the back end, he started making all the calls and getting our guys in the right positions. We went on a run and he was definitely a key component to that success.”

Sharp marveled at Spencer’s toughness and fortitude. Sharp said Spencer took a lot of the stress off the coaching staff while he was on the field.

“My hat goes off to him for the way he handled all of the adversity that he went through,” Sharp said. “He was able to get back in the lineup and he played extremely well on his torn ACL. That’s extremely tough to do. He is a great kid and he’s very smart. He was our coach on the field. Even when he played some offense, he would help us make adjustments and get us into the right situation.

“I played basketball last year and we didn’t have a great season,” Spencer said. “But, I had a great time on the court just finishing off my high school sports years.”

Spencer wasn’t just an athlete but a true scholar. He had a 4.0 grade point average and was an Oklahoma Academic Scholar. He was an SGA all-state athlete. Spencer will be attending Southeastern Oklahoma State University in Durant in the fall, where he will be part of the honors program. He plans on majoring in accounting.

Spencer’s parents (Jim and Racquel) have been married for 25 years and he has a sister named Payton. For both he and his family, the shutdown of Oklahoma schools due to Covid-19 in the spring was a difficult pill to swallow.

Spencer was really looking forward to his senior year. While it was great, he wished he and classmates could have seen the whole year through. It just goes to prove how fast life can go sometimes when you are young, Spencer said.

“For some people, it’s their freshman year – and for others even earlier,” Spencer said. “You want to get there as fast as you can. Just as soon as you get to high school, people will tell you, ‘Don’t wish this away because it’s going to end faster than you think.’ It did end faster than we thought and for our senior class, it ended way before anyone ever thought it would.

“It just goes to show that you can’t take anything for granted. Things can be taken away just like that! I think we all made the best of our senior year. I think Wayne has prepared all of us for our lives away from high school. It’s a good school and I’ve been here all of my life. We are prepared for the future.”