Dragons come up short at CHA 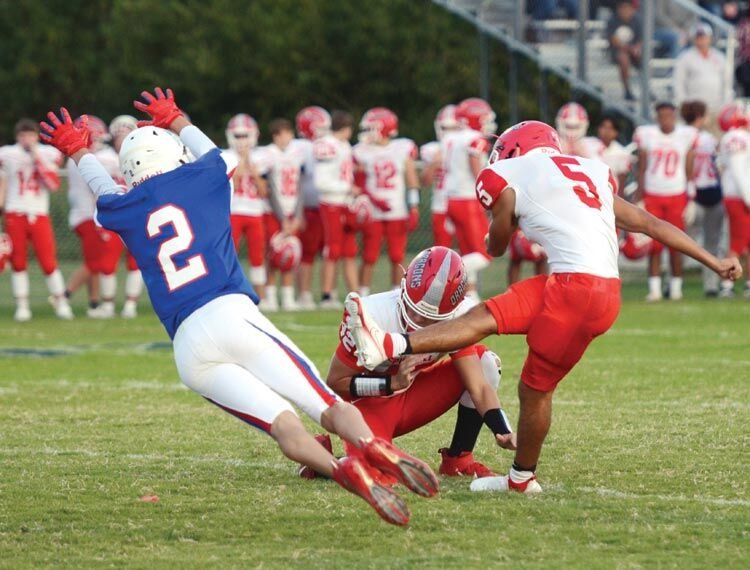 Cale Walker (5) gets off the point after attempt before a Christian Heritage defender can block the kick. 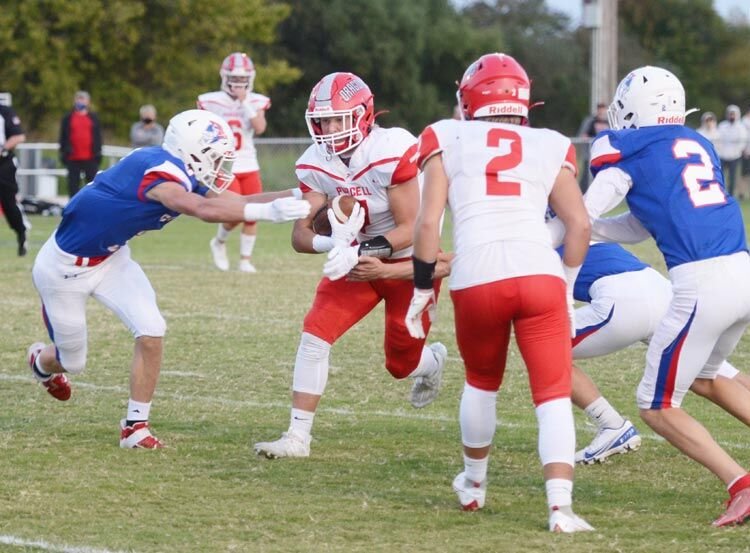 Creed Smith runs through the Christian Heritage Academy defense Friday night while picking up a block from Hayden Harp (2). Purcell was defeated 34-28.

The loss dipped the Dragons record to 1-4 and 0-2 on the season.

Prior to his injury Kroth was 24-36 passing for 217 and one touchdown.

That 15-yard scoring pass was hauled in by junior Creed Smith, who finished with 13 catches for 126 yards. He also carried the pigskin four times for 10 yards.

Senior Sam Wofford scored twice on runs of seven and one yards. He totaled 83 yards rushing on 5 attempts, scoring Purcell’s first and final touchdowns of the night.

Sophomore Payson Purcell had the other Dragon touchdown, darting in from two yards out.

CHA scored on a 70-yard fake punt in the second quarter but the real dagger was a muffed punt that wasn’t fielded cleanly.

“That mufffed punt really killed us,” head coach Tracy Scott admitted. “We had three turnovers and they had none. You can’t win like that especially against people that are pretty good.

“They made more plays than we did. We had four guys around the punter on the fake and no  one made the tackle. It’s tough,” he said.

Wofford made 15 tackles from his linebacker position while Marquez had 13 stops in the defensive line.

Holdenville’s Wolverines are up next for homecoming this Friday night with kickoff set for 7 p.m. Homecoming festivities start at 6:30 p.m. at Conger Field.

After defeating Lexington last week, the Wolverines are 2-2 on the year.

“They are a scrappy football team. They’ll come in here and get after us.We’ll have to play well to beat them,” Scott confirmed.

“We can’t go out and not do things right. We need to not turn it over and play well.”

The Wolverines operate out of an offense that features every formation in the book.

“They run every offensive formation you can think of from an empty set to three backs, some straight I formation. I consider them more of a running team,” he said.

Defensively they operate out of a 3-4 base set.

“They’ll blitz some but not a lot,” Scott said. The key for us is to go execute, win the turnover battles and win the kicking game. That’s what we’ve got to do.”

Purcell Head Coach Tracy Scott nominated Sam Wofford as the Defensive Player of the Week. Wofford made 15 tackles at linebacker for the Dragons last Friday night.

Scott nominated Johnny Marquez as the Defensive Lineman of the Week. Marquez finished the game last week with 13 tackles.