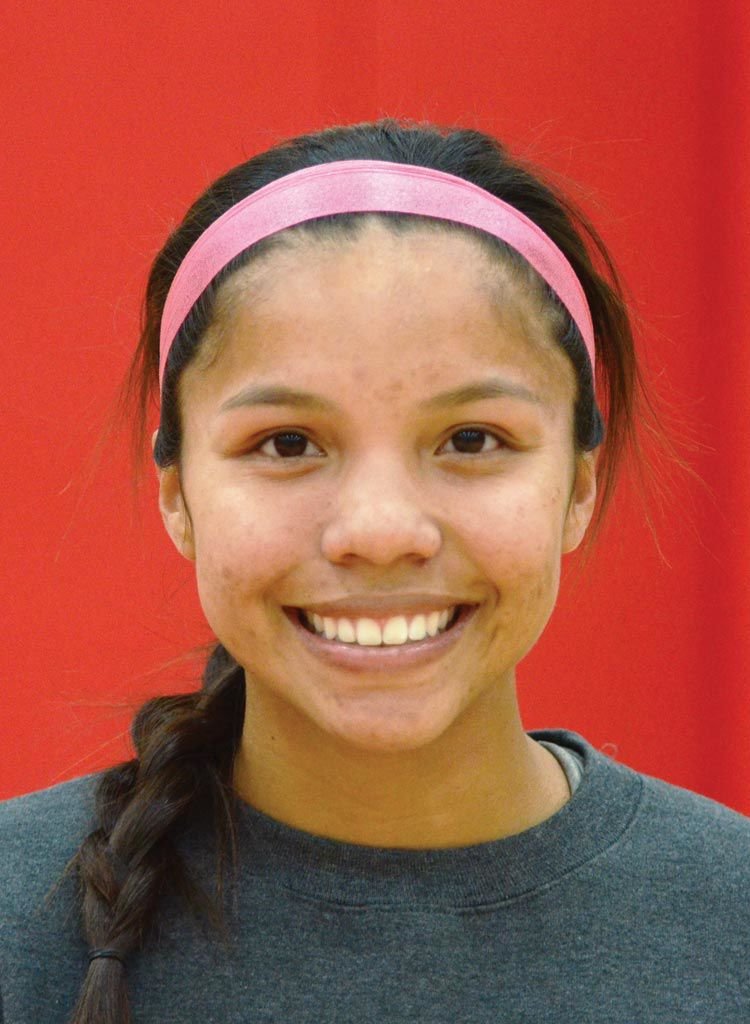 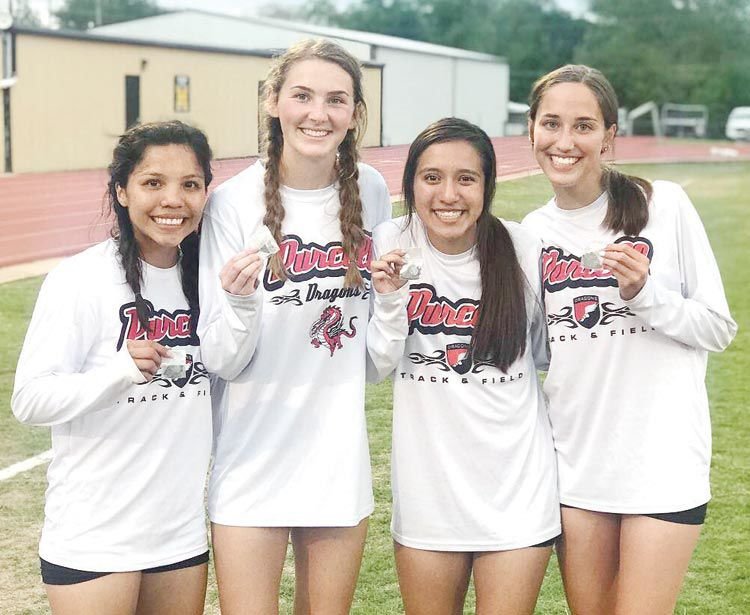 The speedy foursome of Chelsea Spain, Kora Keith, Liz Caralampio and Tate Quintero prior to the State Meet last year. As usual, Spain ran the lead-off leg of the relay quartet, something Greg Dillard says he relied on heavily during her career.

She was a workhorse on the basketball court. She was very quick with her step on the track. And, Spain certainly proved her mettle on the softball field.

Spain might remind some people of the great Babe Didrikson-Zaharias, a multi-sport female standout athlete who excelled in golf, basketball, baseball, and track and field way back when.

Didrikson was named as Woman Athlete of the 20th Century in 1999 by the Associated Press.

Now, Spain is a 5-foot-3 bullet and a sparkplug. Didrikson stood much taller at 5-foot-7. Despite the height difference, Spain certainly put on a show worthy of Didrikson for Purcell fans during her fantastic athletic career.

“Basketball was never her first sport but she played and started for three years when I coached her,” said Purcell Head Basketball Coach David Sikes.

“She was one of the hardest workers I’ve ever seen on a basketball floor. She was able to shut down the other team’s best player night in and night out.

“She’s not very tall but she could shut them down. She had extreme speed both up-and-down and laterally. There was never a second on the floor when she wasn’t going 100-percent. Offensively, she was able to slowly but surely contribute quite a bit. “

Spain averaged 1.6 points per game, 2.5 assists, 1.9 rebounds, and 2.7 steals during her career at Purcell. She was quietly confident on the court and spoke only highly of everyone, Sikes said.

“One thing I remember about her is she never had one thing negative to say about any player,” Sikes said. “She never said a negative word about anybody.

“Her teammates looked up to her because she was always a leader by example. She didn’t talk a whole lot but she led by example, for sure. Her stats didn’t show what a great player she was for us. She was a phenomenal part of the team.”

Sarah Jones, who is the head softball coach for Purcell, had very high praise for Spain, who hit .418 her senior season with six home runs and 34 runs batted in.

She had a 0.910 fielding percentage at shortstop as a senior and was an FCA and SCA All-State performer.

She also was the winner of the Bob Haley Scholarship Award, given to the athlete who played two sports and showed leadership, dedication, loyalty, determination and hard work.

“Chelsea is one of those girls that you wished you had 10 of,” Jones said. “She was a silent leader and led by example.

“She never got onto anybody. She did things the right way on and off the field. She would dictate what we should be doing in a quiet way. She was able to keep everybody calm even when she made an error or somebody else made an error. It never showed on her face.”

Spain’s parents are Mike and Teri. She has a sister, Cari and a brother,  Cayden. Jones said she knows her family embodied the qualities that make Spain the athlete – and student – that she became and still is.

“She was always able to move on and do better the next time – but she didn’t make many errors at all, so that’s great,” said Jones of Spain, who was also an All-State performer in the eyes of the OHSFSCA (Oklahoma High School Fast Pitch Coaches Association.)

“She was my starting shortstop all four years,” Jones added, “and she usually was hitting in the two or three hole. She’s just a really great kid.

She also played basketball and was a State Champion in track. She comes from a good family and I know she’ll continue to work hard in college. Chelsea always wanted to get better.”

Spain has already signed a letter of intent to play Division 1 softball for Northwestern State University in Natchitoches, La., home of the Demons.

Northwestern is a member of the Southland Conference and the Demons finished sixth in the league with a 15-12 record and 30-27 overall in 2019.

“I came in as a freshman (at Purcell) and I ended up starting,” Spain said, “but I felt a lot of pressure at first. I settled down and I think I was able to become a leader for us as the years went on.

“It was a lot of fun and I made a lot of friends on other teams even – girls that I still keep in touch with. I had a special bond with my teammates.”

Purcell finished runner-up for the 2019 Class 4A State championship with a 28-4 record, losing to the Newcastle Racers, 1-0, for the championship trophy.

“We had a lot of success in softball,” Spain said. “In basketball, I was always put on one of the other team’s best players to try and shut them down.

“That was my role all four years. I got a little better offensively each year but playing defense was my main thing. I just want to be the best I can be. I want to help my team out any way I can. I knew my role and I always tried to get the job done.”

Track and field might have been Spain’s best sport of them all. She was a speedster who ran the 100 and 200-meters.

She also competed in the long jump. She was the leadoff runner for the 400, 800, and 1,600-meter relay teams for Purcell track coach Greg Dillard.

She was the Arbuckle Conference champion in both the 100 and 200-meters. She helped Katelynn Carwile, Savannah Ibarra and Haylee Swayze to the StateChampionship in 2017 with a time of 52 seconds flat.

“She’s a dynamic athlete,” Dillard said. “She’s like a ninja. She’s a silent killer because she can sneak up on you. She is always one of the athletes that you can count on.

“She led the relay team all four years and she ran on the State Championship mile relay team two years ago.

She’s a kid I put total trust in because I put her in the leadoff spot which is very important. Not every kid can do it. She’s the one I always leaned on.”

For Dillard, Spain reminds him of another multi-sport athlete – the great Jim Thorpe, who played major league baseball with the New York Giants and Cincinnati Reds and pro football with the Canton Bulldogs. He won gold medals at the 1912 Olympics in both the pentathlon and decathlon.

“I call her ‘Jill Thorpe’ because she is just a well-rounded athlete,” Dillard quipped. “I’ll miss her deeply when she’s gone this next year. This will hurt me bad. She’s one of those kids that you take for granted because she is so good.

“But, when she’s gone, you sure do miss her. She excels as much in the classroom as she does on the track.

“She’s an even better person, though, most of all. She never said a negative thing about anyone. She was always positive and she never got into gossip or anything. She always had a kind word for everyone. I tell you this… If you don’t like Chelsea Spain, then something is wrong with you. She’s a winner in all aspects.”