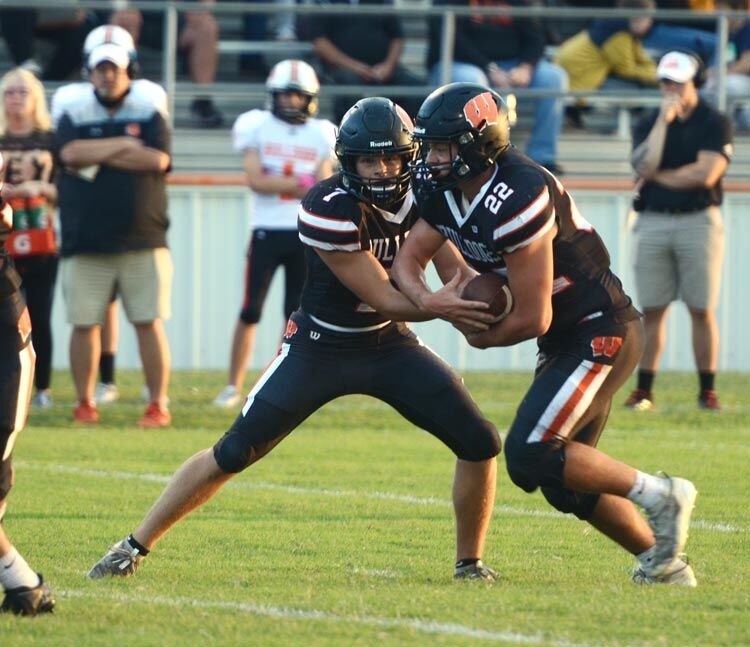 The duo of Ethan Mullins and Brannon Lewelling rushed for 477 yards and eight touchdowns Friday night against Rush Springs during Wayne’s 53-13 win. Wayne hosts Healdton Friday night amid homecoming festivities. Coronation is at 6:30 p.m. with kickoff to follow at 7 p.m.

Wayne head coach Brandon Sharp thought it might be a scoring shoot-out like the University of Oklahoma football team has been accustomed to playing as of late.

“I thought we were in for an OU game,” Sharp said of the opening quarter Friday night. “But our defense settled down and played really well.”

The Bulldog defenders did settle in to the game after the first few possessions, in which Rush Springs scored on touchdown runs of 78 yards and 75 yards. They mostly shut down the Redskins to finish the first quarter and for the rest of the game for that matter.

“After the initial surge our defense played really well,” Sharp said. “We have to maintain our gaps and on the first couple runs we didn’t.”

The Wayne defense held Rush Springs to only two yards rushing in the second half and the Redskins were 0-5 passing.

A large part of the success was due to the Wayne defensive line.

“Our defensive line did what we needed them to do,” Sharp said. “We have to play sound defense and when we do that we’re pretty good.”

Along the defensive line, Maddox Mantooth had eight tackles and forced a fumble, Andy Lee registered four tackles, a sack and a forced fumble Ryan Redus accounted for five tackles.

Brian Ibarra had a big night as well with three tackles and three fumble recoveries.

Brannon Lewelling turned in his usual outstanding game and had 10 tackles at linebacker.

Offensively it was the “Ethan Mullins Show” with the quarterback racing up and down the field, with his trusty sidekick Lewelling jumping in to please the crowd when Mullins didn’t have the ball.

The talented junior tandem led the Wayne rushing attack, which finished with 503 yards on the night.

Mullins carried the ball 25 times for 366 yards and six touchdowns. He did this without a carry in the 4th quarter and limited action in the third.

“It was one of those nights where Ethan blows up,” Sharp said. “The offensive line did a good job and he was picking and choosing the right hole on the stretch play. He has great vision.”

Wayne had no turnovers in the game.

“It’s double tight, old school smash mouth football,” Sharp said. “They are huge up front and their running backs run hard. It’s a lot of power, blast and toss. It’s Ringling from the 80s and 90s.”

Healdton is coached by Ringling alumni Taner Richardson, who quarterbacked Ringling to the 2012 Class A football championship.

Defensively Headlton runs a 3-4 front with a really quick nose guard and physical ends, according to Sharp.

“Healdton is getting better every week,” Sharp said. “We expect them to play really well against us.”

The Defensive player of the Week was Brannon Lewelling.

Andy Lee was nominated for Offensive Lineman of the Week.

Maddox Mantooth was the Defensive Lineman of the Week nominee.

Homecoming coronation ceremonies are set for 6:30 Friday night with kickoff set to follow at 7 p.m.