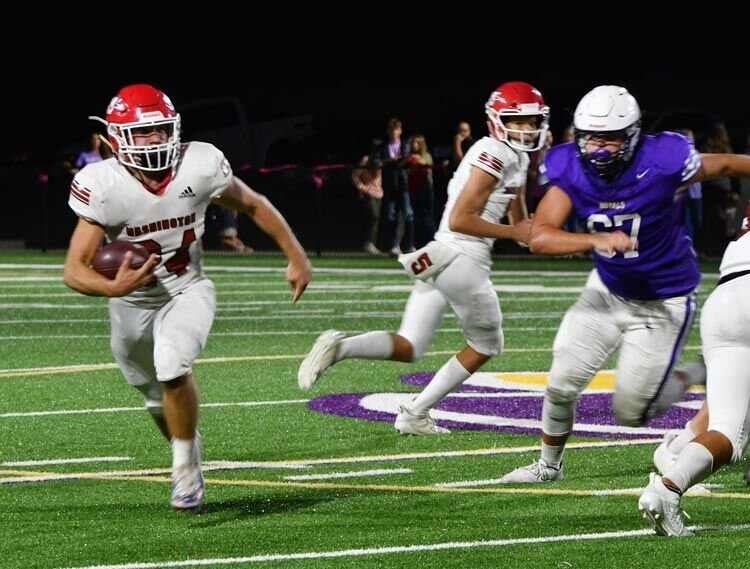 Chase Allison runs through a gaping hole Friday night during Washington’s game against CCS in Norman. The Warriors won 37-8. Allison finished the night with 13 carries for 84 yards.

Washington Junior Kobe Scott stepped in front of CCS’s second pass attempt of the night last Friday and took the intercepted pigskin 60 yards to the house, kick starting a 37-8 shellacking of the then No. 10 Royals.

Depending on the poll, Washington is ranked anywhere from No. 2 to No. 4 in Class 24 with their unblemished 6-0, 3-0 season record.

After senior Kaden DuBois’ 27 yard field goal, Washington eventually stretched their first half lead to 24-zip after a pair of Emitt Wilk touchdown runs of eight and 16 yards.

CCS put together a late second quarter scoring drive that garnered 99 of their 192 rushing yards leaving the score 24-8 at intermission.

But Washington did. Twice in the third period on a 16 yard scoring pass from Jaxon Hendrix to Kelton Schultz and a 36 yard Chase Allison scamper to pay dirt.

Allison finished the night with 13 carries for 84 yards.

“But they were tough yards,” head coach Brad Beller said. “They (CCS) blitzed on every play bringing seven. It took us a little bit to get the run game going.”

Beller said getting Wilk back from injury helped stabilize the offense, Beller said.

“He played both quarterback and slot. It was great having two quarterbacks with experience. That is a big deal for our offense.”

Beller praised the play of sophomore Hendrix, who stepped in and stepped up when Wilk went down with an injury in the Lindsay game.

But Beller said early on when the run game wasn’t exactly hitting on all cylinders it was the work of junior wide receiver Luke Hendrix that kept the Warriors afloat.

“Early on I felt like Luke Hendrix kept us going. He had three big receptions for 52 yards in the first half and all three were on key downs. He continues to make big time plays for us.”

Defensively in the key district game, Beller credited his defensive secondary with making big play after big play so the Warriors could remain undefeated.

He was praising the play of Scott, who had the pick six, Luke Hendrix, Jaxon Sanchez, Reese Stephens, Jamison Holland and Lane Steele.

“We played a lot of nickle and dime sets,” Beller said. “They all played well. They played really well in pass defense.

“It wasn’t great or a complete game but we held them to 76 yards passing. In the run game we bent but didn’t break.”

CCS rushed for 192 yards but 99 came on one possession.

“Overall, I was pleased with the defense,” Beller said.

And that is considering they played a game the Saturday before due to COVID issues at Bethel.

Up next for the Warriors is home game tonight (Thursday) against Lexington’s Bulldogs who will make the trip for a 7 p.m. kickoff.

“They are well coached. Everyone knows their roles and responsibilities. They will bring pressure but it is mainly from the outside making you running their big defensive line.

“We need to keep them from dictating what we do and stay balanced. Their offense has seemed to find a rhythm,” the coach said.

He said his defenders will be focusing on stopping running back Heath Winterton and quarterback Dylan Cottrell.

“Cottrell is big and fast,” Beller said. “I saw him outrun everyone against Christian Heritage and I think they are pretty quick. We’ll have to corral their playmakers and not let them get going.”

Beller nominated Austin Smith as the Offensive Lineman of the Week for his 80 percent grade against CCS.

Getting the nod as the Defensive Lineman of the Week was Seth Tague,  who registered four tackles including one for a loss.

Washington’s nominee for Defensive Player of the Week is Kobe Scott, who made five tackles and had one interception for a touchdown against CCS last Friday night.