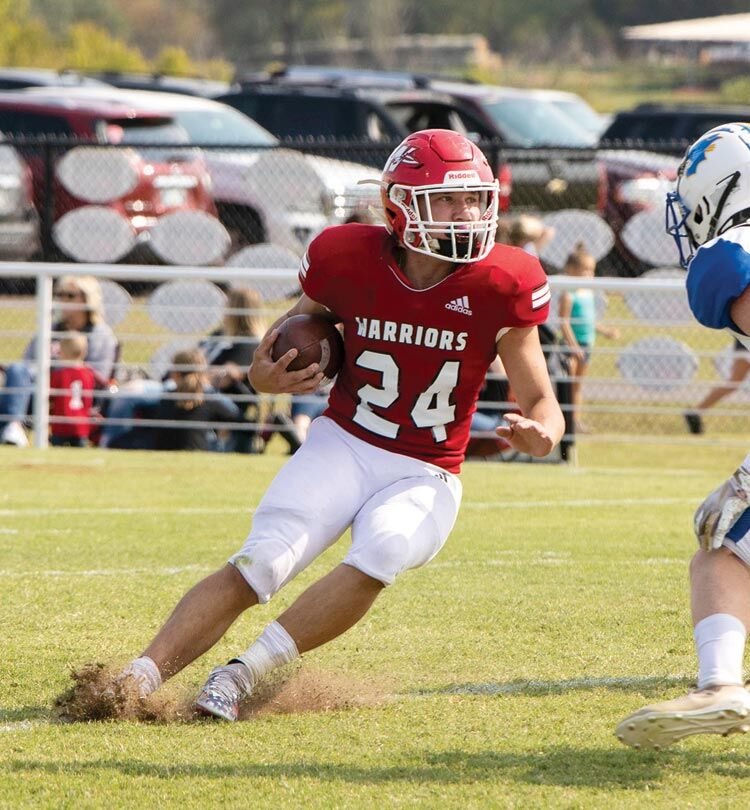 Chase Allison makes a cut Saturday against Bethel during Washington’s 55-14 win. Allison rushed the ball 16 times for 143 yards and the three touchdowns. 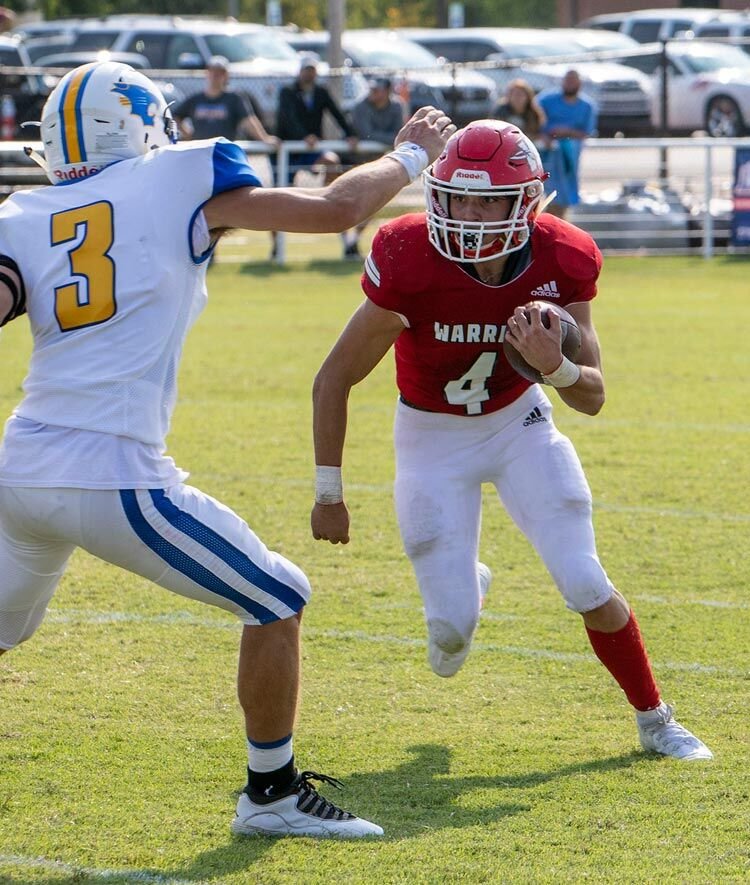 Jaxon Sanchez shakes off a Bethel defender during Washington’s 55-14 win Saturday. Sanchez caught a 19-yard touchdown pass in the game. 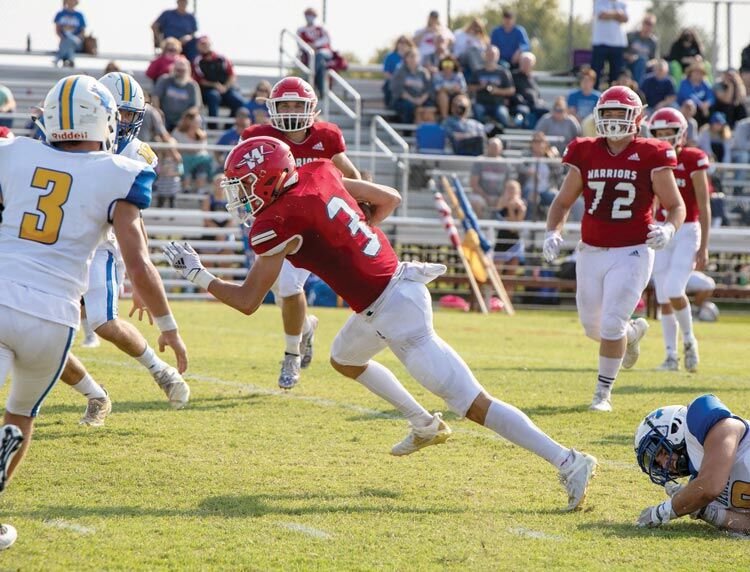 Kobe Scott runs with the ball during Washington’s 55-14 win over Bethel Saturday. Scott scored on a 20-yard reception in the third quarter.

Chase Allison ran for three touchdowns and Jaxon Hendrix tossed a trio of touchdown passes leading the Washington Warriors to a 55-14 shellacking of the Bethel Wildcats in a rare Saturday afternoon.

The game was delayed to Saturday due to COVID quarantines be lifted on several Bethel players.

Allison scored on runs of 33, 11 and one yards in a very balanced offensive performance.

“At halftime we had 17 run plays and 17 pass plays,” head coach Brad Beller noted. “That’s the type of balance we’ve been wanting out of our offense. And that’s the reason we were able to score 42 points in the first half.

Hendrix heaved a 43 yard scoring strike to Luke Hendrix in the first quarter. He hooked up with Jaxon Sanchez for a 19-yard touchdown pass and catch in the second period and tossed a 20-yarder to Kobe Scott in the third quarter.

The sophomore signal caller was 17-21 for 251 yards and the three scores.

At intermission Beller reported the Warriors had 150 yards passing and 151 rushing.

“We’ve been waiting all year for our offense to click and we got the balance we’ve been looking for.”

Special teams played a key role in the route.

Jamison Holland returned a kickoff to pay dirt in the first period. His 65 yard scoring burst was followed by the ever dependable Kaden DuBois with one of his seven point after touchdown kicks.

DuBois also booted a pair of field goals in the contest of 44 and 48 yards.

“His 48 yarder would have been good from 55-60 yards,”Beller said. “We have a drainage gate behind the cover behind the end zone and it landed over the top of it.”

DuBois did well kicking off as well getting touchbacks on nine of his 10 kick offs.

“He was 7-7 on PATs and 2-2 on field goals,” Beller said. “He played really, really well. We never punted so he didn’t have the opportunity to  impact the game that way like he always does.”

DuBois has four field goals this season of over 44 yards or more.

Luke Hendrix hauled in six receptions for 160 yards and the score.

“And, Chase Allison was his normal self rushing 16 times for 143 yards and the three touchdowns. “Our offensive line played great. They continue to play well overall in both the passing game and the run game.”

Beller labeled his defensive performance in the first half as “a mixed bag.”

“They had over half of their total yards on three plays,” the coach reported.

Bethel had two 60 yard runs and a 52 yard pass and they scored after the two long runs.

But the Warriors buttoned up in the second half never allowing the Wildcats to get close to another score.

“Outside of those three plays we played extremely well,” Beller said.

“Jaxon Sanchez played extremely well at safety,” Beller reported. “Chase Allison and Kelton Schultz did a good job at outside linebacker outside of those three plays.”

Up next for the No. 2 ranked Warriors is a short road trip to Norman to square off with the CCS Royals.

“They run a spread offense and throw it all over the yard,” Beller said. “But they’ve added some triple option this year. The quarterback is the coach’s kid. He runs well and throws it well. We’ll have to be very sound defensively to stop the option game.”

The Royals base out of a 3-4 on defense and love to blitz.

“They try to bring pressure and get to you before the play can get going,” Beller said.

Washington Head Coach Brad Beller nominated Jaxon Hendrix as the Offensive Player of the Week. Hendrix was 17-21 passing for 251 yards and three touchdowns.

Beller nominated Jaxon Sanchez as the Defensive Player of the Week. He had eight tackles last Friday night.

Nominated as the Co-Offensive Linemen of the Week were Austin Smith and Seth Tague. They both graded out at 92.3 percent against Bethel.

Beller nominated Titus Cline as the Defensive Lineman of the Week for his six tackle performance against Bethel.