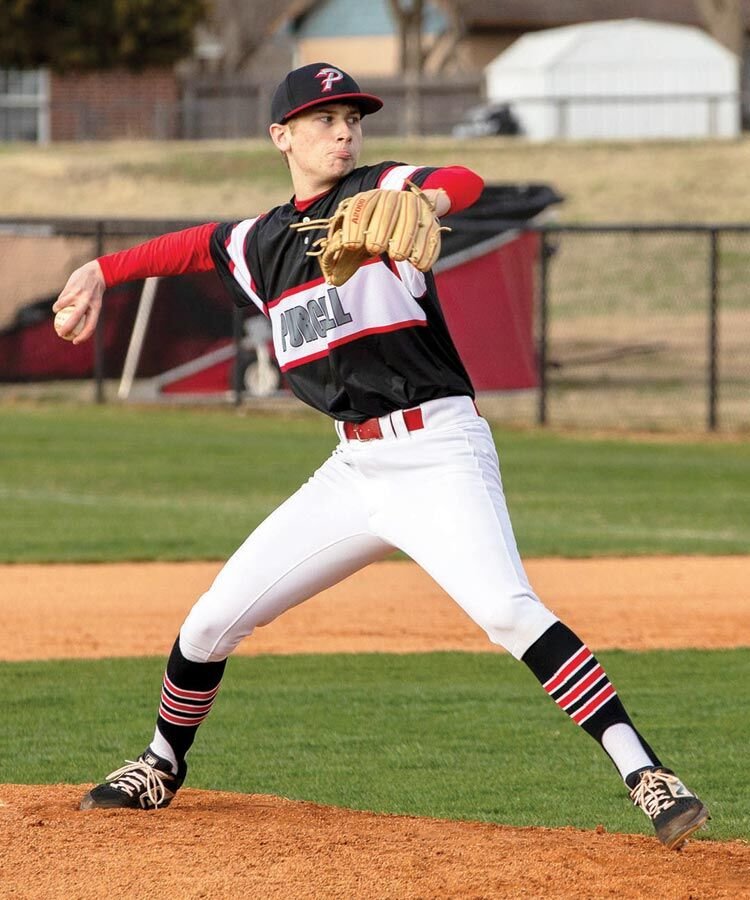 Purcell pitcher Zach Idlett brings the heat against Dibble last Thursday when in his first varsity start tossed a no-hitter in a 10-0 Dragon shutout victory. 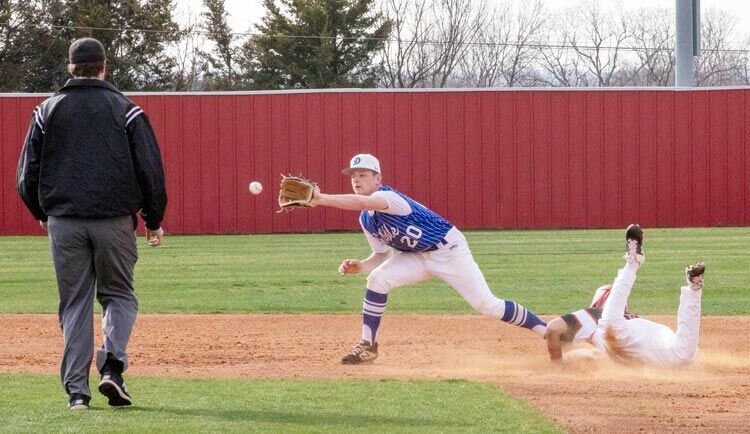 Purcell’s Jorge Munoz is safe by sliding head first into second base during Purcell’s 10-0 shutout victory over Dibble last Thursday. 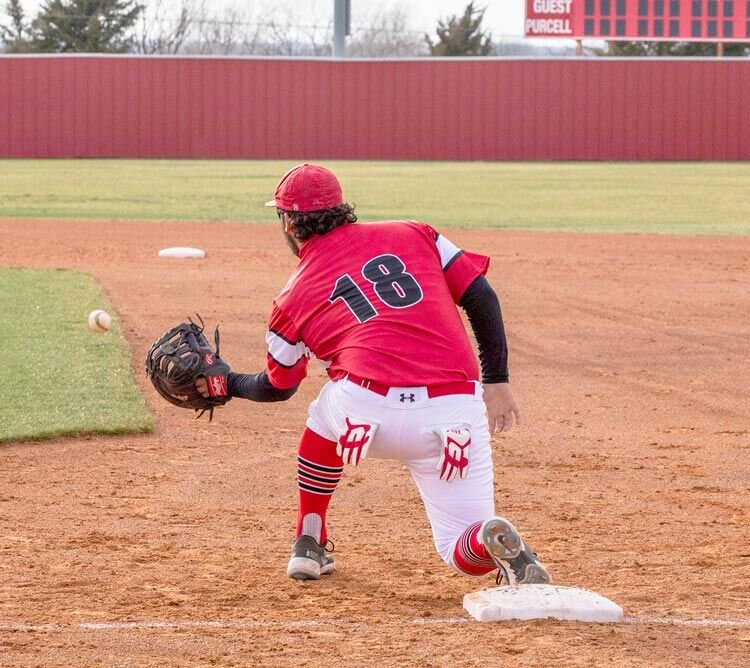 Despite losing Nick Albright, Brendan Farris and Jeremy Cudd to graduation, Purcell’s 2021 Dragons have a good nucleus on which to build this season.

“I felt bad for the kids last year especially for those seniors and for everyone that lost a year of playing,” Sharp said.

“So coming into this year has been interesting but also exciting for the players we have coming back. And it’s giving kids that haven’t had that much playing time the chance to help us out.”

Cole noted that senior Gavin Constant, who would have been a huge part of the equation this year will miss the season due to a football injury.

The Dragons have five seniors including four year starter at short stop Cade Smith. Dayton Smith will pitch and play some first base and also find himself in the outfield at times.

Ryan Maynard will catch and pitch and play some in the infield. Senior Jayden Payne, who hasn’t played since his freshman year, is out for the squad this season.

Juniors on the roster include catcher Creed Smith, who will also see some time on the mound.

“He will primarily catch but will pitch a little,” the coach said.

Fellow junior Nate Willis is a utility player and will see some time on the mound. Hayden Harp will compete at second and play some outfield. Brodrick Smith’s primary job will be on the mound but he will also see some time at first base. Juniors Jorge Munoz and Titus Mason will give the Dragons much needed depth.

“I’m excited for these kids because they have been working really hard since January,” Sharp said. “I believe one of our strengths will be our speed and our defense. We will rely on an athletic group that can play multiple positions.”

Sharp said missing last year will hurt in experience on the mound and in the hitting department.

“The challenge for our kids will be getting back the timing in hitting and game type situations they missed last year. The kids are excited and ready to go,” he confirmed.

“I thought Brodrick pitched okay,” Sharp said. “He struggled a little at first but finally settled down. They just hit the ball really well.”

Sharp said the Rockets will be one of the top teams in the entire district.

“We made too many mistakes and dug ourselves a hole we could not get out of,” the coach said. “We need to pick it up and get some timely hits. We had opportunities in the game to score more runs but just didn’t get it done.”

Cade Smith was 2-2 in the game while Nate Willis went 2-3. Dayton Smith had the other Dragon hit.

Purcell bounced back to post a 10-0 run-rule shut out victory over Dibble last Thursday.

Idlett, in his first varsity start, threw BBs and tossed a no-hitter at the Demons.

“I felt Zach controlled the game right off the bat attacking the strike zone and working ahead in the count all day long. He did an outstanding job for his first start.”

Sharp said from top to bottom is was Purcell’s best game of the young season both offensively and defensively.

“That was probably the fastest game I’ve ever been a part of,” Sharp said. “It only took an hour to play.”

Purcell pounded out 11 hits in the game with Creed Smith leading the offense going 3-3 at the plate and knocking in a trio of RBIs.

“Our leadoff hitter Cade Smith has been hitting the ball really well for us, especially in our last two games. He has been all year,” Sharp said.

Cade Smith, Dayton Smith and Jorge Munoz all went 2-3. Munoz had two RBIs and Dayton had one.

The Dragons were to host Asher Tuesday and not play again until Monday when they travel to Harrah.

Harrah was scheduled to come to Purcell the following day.