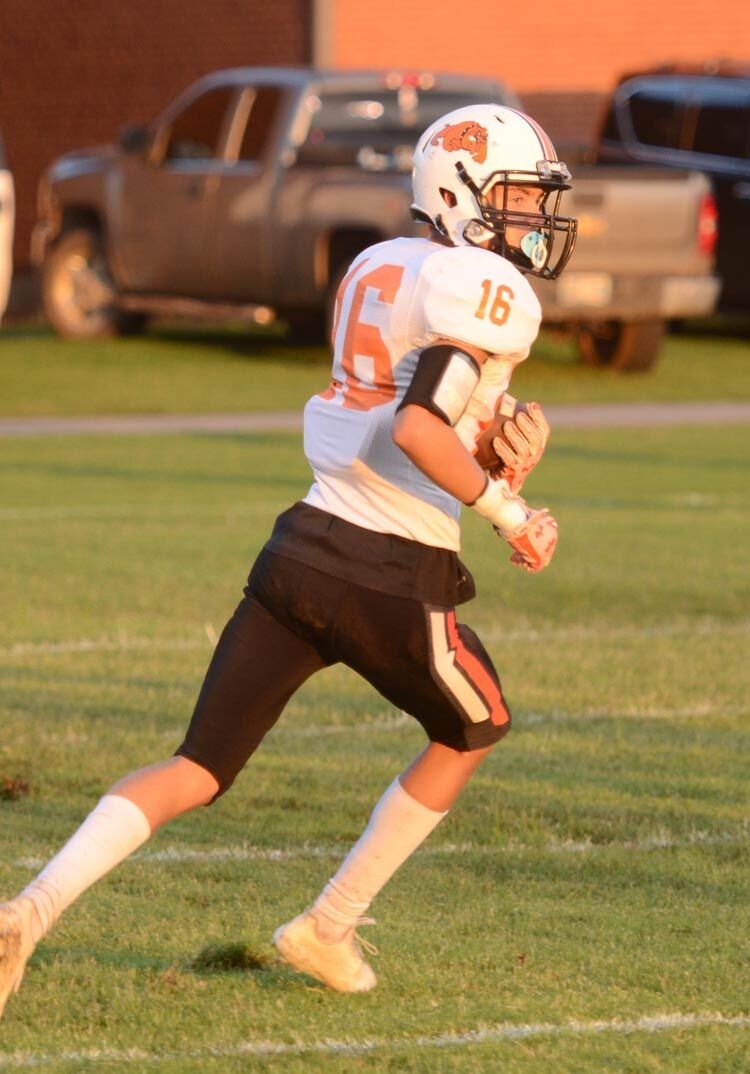 Dylan Cottrell is a threat to score any time the ball is in his hands. Lexington hosts Christian Heritage Academy Friday night at 7 p.m.

The Wolverines upped their record to 2-2 under head coach Monty Lewis as Holdenville won its first district game of the season.

The first half was scoreless as both teams’ defenses played lights out. Lexington got on the scoreboard first when quarterback Dylan Cottrell scored from two yards out on a keeper.

Josh Scott of Lexington then caught a two-point conversion pass from Cottrell for an 8-0 lead. But, the advantage was short lived.

Holdenville scored later in the third quarter on a 19-yard pass play. The Wolverines then tied the score on a 10-yard two-point conversion run.

The Wolverines ended up winning the game in the fourth quarter with a 10-yard touchdown run and another two-point conversion.

Lexington was held to just 163 yards of total offense while Holdenville had 191 total yards. The ‘Dawgs had the edge in the passing game with 86 yards through the air, as compared to Holdenville’s 70 yards.

“The first half was scoreless and our defense played really well,” Lexington head coach Keith Bolles said. “Offensively, we just have to get better. We have to execute better.

“It was a hard fought game but we just have to execute better on offense. That’s all there is to it. There’s a lot to process from the Holdenville game and we need to break it down and get ready for this week’s game.”

Lexington had to postpone their homecoming activities September 25 when Crooked Oak was unable to play due to the coronavirus. So, this week’s home game at 7:30 p.m. on Friday against Christian Heritage Academy will be the school’s homecoming game.

The kickoff time was moved back 30 minutes so as not to rush the coronation festivities that being at 6:30 p.m., according to athletic director J.D. Beck.

CHA, a private school in Del City, will not be an easy challenge for the ‘Dawgs. The Crusaders are 3-2 so far this season and 2-0 in district competition.

CHA’s two district wins have come against Bethel, 25-20, and Purcell, 34-28, last Friday. The Crusaders also have a victory over Stratford under their belts.

“We are at home against CHA this week and they are good,” Bolles said. “It will be a big district game for us. We’ll have to come through in a big way against them.”

Cam Conner was nominated as the Player of the Week on both sides of the line. On the offensive line, Conner graded out to 63 percent. On the defensive side of the line, Conner had four tackles with one tackle for a loss of yardage along with an interception.