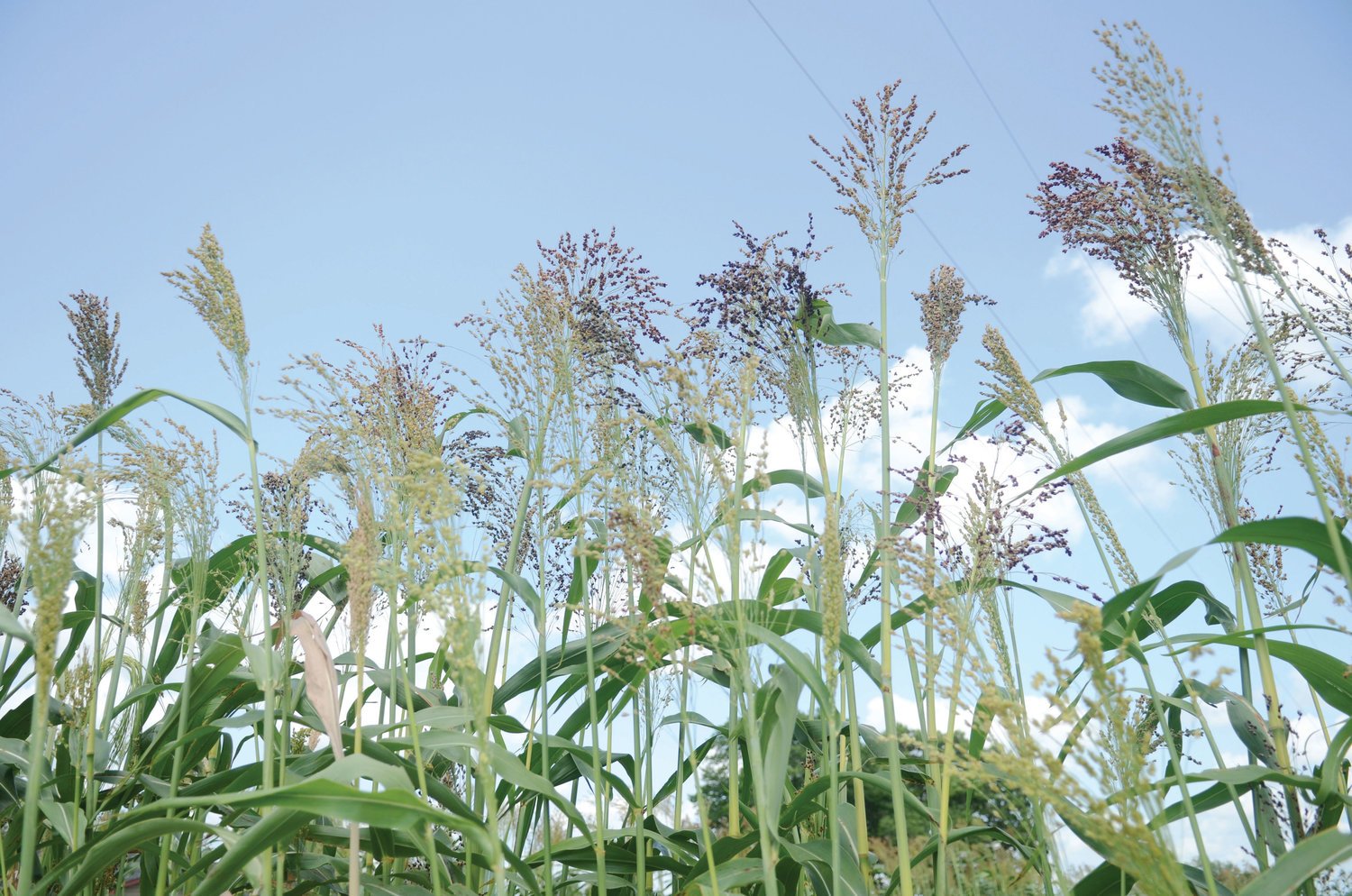 A patch of broomcorn on property east of Wayne owned by Randy Robinson is remindful of days gone by.
The Purcell Register
Posted Thursday, August 26, 2021 9:00 am
Dale Green

(Editor’s note: This is the second installment of broomcorn memories)

Now, to some of the technicalities and practices of raising broomcorn.

The land is prepared for planting in no special way. That is to say, it is first “broke”with a breaking plow (turned over). It might then be disked to break down the clumping of the soil. This depended on pop’s mood, the consistency of the soil, or other variables inside his head. You didn’t want to ask.

To add a little cultural spice to the story in our little corner of the World, this heavy work was accomplished by an ancient F20 Farmall tractor that was mostly worn out. You had to start it with the crank, which could break your arm if you weren’t careful.

We burned “drip” gasoline, which is to say, it was not refined gas. It had a lot of oil content that was not good for a new engine. Usually, the “drip” gas was delivered to us by the “Gas Man,” sometimes after midnight, in 60 gallon drums. The gas was hidden behind tall Johnson grass at the back of the house. The old F20 would burn the “drip”, blow black smoke high, and pull like crazy.

The piston rings were so bad that the unburned oil content would gravitate to the tractor’s crank case. We got a lot of mileage out of having the only tractor in the neighborhood that could make oil while it worked.

Some of the “poor” farmers burned the “drip” gas, and some didn’t. It was part of a subculture based on “just gettin’ by.” Farmers were by and large honest to a flaw. They couldn’t abide a thief. We had no locks on our doors. They helped each other out, and you trusted your neighbors. Were they hypocritical for burning “drip gas”? It would depend on who you asked. Life’s kind of like that sometimes.

The next stage of preparing the ground for planting in the spring was harrowing the fields, which smoothed and flattened the soil. This operation was accomplished with a little B Farmall, which also pulled our antique planter.

The broomcorn had to be planted in rows, so it couldn’t be “drilled” in like wheat. This was because the distance between the rows, allowed the Broomcorn Johnnys to harvest the broomcorn (to be explained later).

Although I never gave it a thought, until I was writing this letter, that some of the equipment (which came with the rent/lease) dated back to “horse and buggy days”. Dating even further back, the fact that the word “Landlord” was substituted, for the land owner pointed to the “deep south,” and perhaps even to colonial days, or further back.

Our “two row” planter was originally designed to be pulled by a team of horses or mules. It therefore had to have a long tongue to allow for the horses, or mules, to pull the thing. When pulling it with a tractor it made turning the corners tricky. It also made the operation a “two man” proposition.

The second person (me), sat on the planter seat, and pulled the large lever that pulled up the planter “sweeps” and stopped the flow of seeds. This required coordination on the turns; Pop would raise his hand high when it was time to  pull the lever for the turn. It was not pleasant if you didn’t do your job well.

Of course, all of the old equipment had to be maintained. Pop could fix or “rig” about anything. We kids watched him work, fetched tools and learned. We knew what a half inch, or nine sixteenth wrench looked like, long before we learned numbers and “fractions.” You didn’t want to fetch the wrong wrench.

When Pop finally took a day job in town, we “farmed on the side.” That meant that us kids learned how to run and maintain machinery. This came in handy, when several years later, “I ran a combine (wheat harvest), to the Canadian line, and pretty soon that college degree was mine.”

After planting the broomcorn in the spring, and everything went well, it was time for harvest in deep summer’s sweltering heat. Your article covered and described this well. But the farmers themselves didn’t do the direct work, at least in our family.

Pop was the manager. It was mostly the kids that dreaded the backbreaking misery. There were not many full-time farm workers at that time, that’s what kids were for. Pop had a network of farming/hunting friends, and they all had kids. He was a coyote hunter, and his hunting buddies had kids. Since we didn’t have telephones, he would put out the word for the “broomcorn cutting day.” Some kids had cars, or access to cars. Others, who needed a ride, were given a “lift” in mom’s old 1948, teardrop, Plymouth.

There were two types of broomcorn grown - standard and hybrid. On both types, it was close to being ready for cutting when it “headed out.” The “heads” looked like other “feed” crops, such as “maze,” except the seeds of broomcorn were a little smaller (about half the size of “bbs”), and worthless, as far as I know. When the “heads” turned dark, it was close to cutting time. Just exactly when was inside “Pop’s” head.

The standard type broomcorn grew higher than a man’s head, which required an extra step in the harvesting cycle. It had to be “broke.” This added to the Johnny’s heat misery level, as it was hard to even catch as much as a breeze through the broomcorn stalks. This was often done in pairs, with one Johnny on the left row and one on the next right row.

The one on the left positioned one arm in front of him, with several stalks in back of the arm. This allowed the other arm to fold or bend the stalks over about waist high. When the other Johnny repeated this the opposite way, it formed a table of stalks that could be cut about where the bend was.

After cutting the broomcorn, one made a small stack, which would be picked up later (“bucked”), and then stacked on the old “float” wagon or trailer. It too, was a relic from the past; it had iron wheels, and one had to pull it at a snail’s pace, to the broomcorn shed.

The hybrid broomcorn grew about chest high. Therefore, it could be cut without “breaking” it. Because of the different positioning, of the stalk, when cutting, you turned the Johnny knife upside down. You reversed the knife (upright in the hand) for cutting the standard broomcorn. One way you pushed the knife, and the other, you pulled.

The Johnny knife was about six or seven inches long, half handle, half blade, and totally blunt on the end. It was kept sharp. For the kids, it was a “Rite of Passage” when old enough to be allowed to use the Johnny knife.

Of course, in the stifling, hot as hell heat, hydration was important. It was the farmer’s obligation to provide water for the Johnnys.