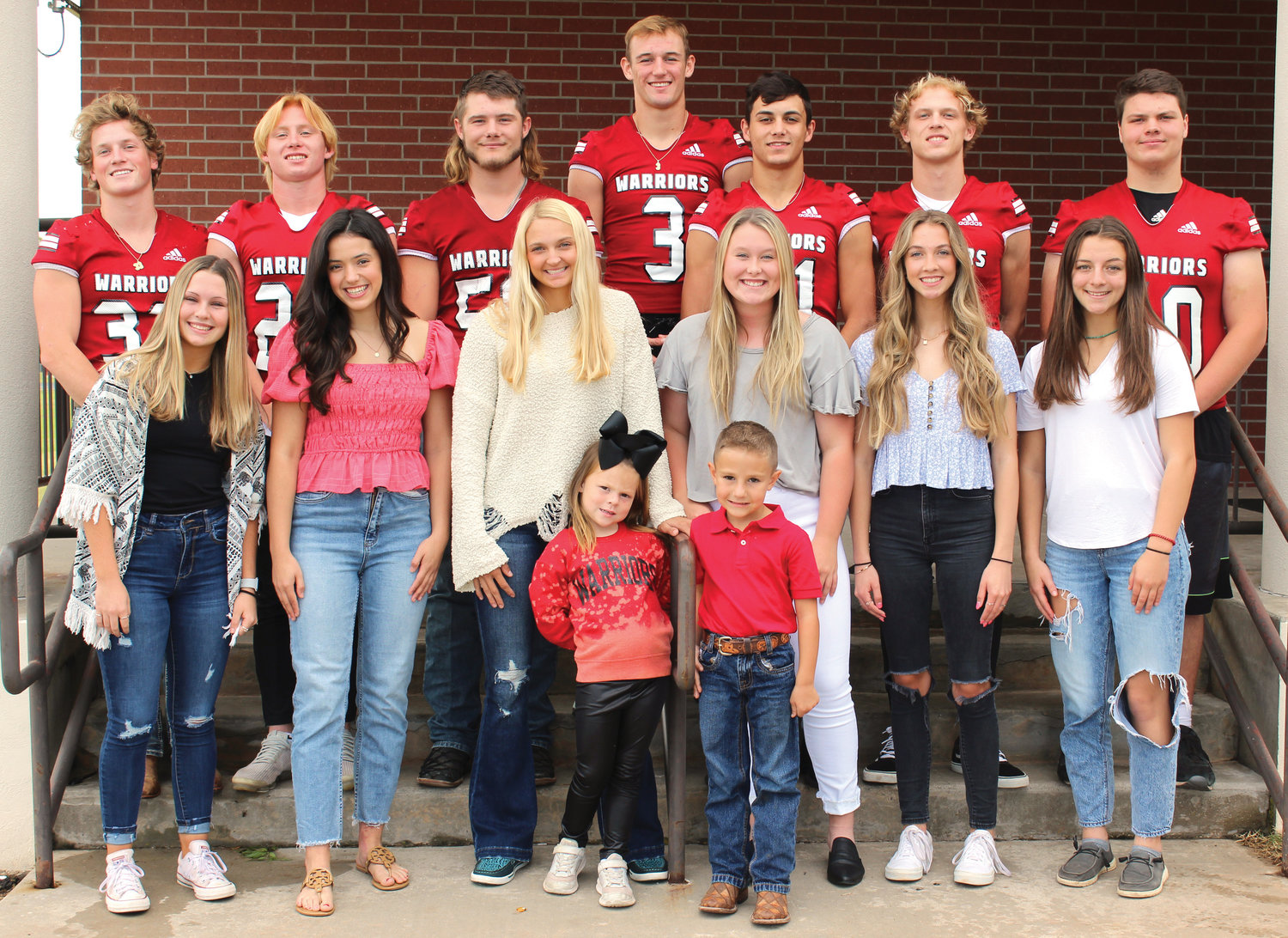 It will be the Washington Warriors against the Holdenville Wolverines at 7 p.m. Friday.

But many in the stands will have their attention focused on the pre-game event – the coronation of a homecoming queen and king.

Homecoming day in Washington will also include a parade at 2:50 p.m.

Cantrell, 17, is active in cheer and competitive dance and is a member of Fellowship of Christian Athletes, National Honor Society, FCCLA and Art Club. She has twice been Cheer State Champion and three times was runner-up. She is the daughter of Kevin and  Kelli Cantrell.

Madden, 18, is a cheerleader. She is a member of NHS, FCA, Student Council and Summit Youth. Her cheerleading accomplishments include  three-time regional champion, two-time state champion and competition runner-up. She is also the recipient of the J&C Leadership Award in 2021. Her parents are Clifford and Kathy Madden.

Richardson, 18, plays fast-and slow-pitch softball and basketball. She also competes in cross-country and track. She was state champion in long jump in 2021 and is on the state champion fast-pitch softball team for 2021. She also played on the runner-up team in 2019 and 2020. She is the daughter of Angela and Eddie Vaughn and Stacey and Adam Richardson.

Lang, 16, is a cheerleader and member of FCA, NHS and Science Club. She is the daughter of  Lori and Matt Lang.

Ralls, 16, is active in cheer, track, FCA, FFA and junior rodeo. She is the daughter of Melinda and Gilbert Keith.

Taylor, 14, plays basketball and competes in rodeo. She is a cheerleader and member of FCA. Her parents are James and Megan Belcher.

Hendrix, 18, plays football and basketball and competes in track. He is a member of FCA and FCCLA. He was on the district champion and state runner-up football team in 2020 and qualified in 4x1, 4x2 and 200 at state track meet. He is the son of Amy and Travis Hendrix.

Jackson, 17, plays football and is on the honor roll. He is active in CyberPatriots and competes in SkillsUSA. He is the son of Paul Jackson and Cheri Jackson.

Kobe Scott, 18, is a member of NHS, FCA and FFA. He plays football and basketball. He is a three-time medalist in state track and has been Student of the Day. His parents are Dusty and Heyle Scott and Sheena and James Pearce.

Rope Scott, 18, plays football and participates in track and powerlifting. He is a member of FCCLA. His parents are Mike Scott and Mindy Bloodworth.

Spaulding, 18, plays football and participates in track. He is the son of Mike and Tami Spaulding.

Steele, 17, plays football, basketball and golf. He also participates in track and is a member of FCA, NHS and Summit Youth. He played on the runner-up state champion football team in 2020. He is the son of Todd and Angie Steele.

Stephens, 18, plays football and  baseball. In  addition to twice being state champion in football, he played in the state semi-finals in baseball. He is a member of NHS, FCA, FCCLA and Art Club. He is the son of Darren and Tara Stephens.

Ripkyn Lampkin will be flower girl. She is 4 and is in pre-kindergarten. Her parents are Tylor and Alyssa Lampkin.

Crown bearer will be Sawyer Scott, 5. Also in pre-K, he is the son of Dusty and Heyle Scott.