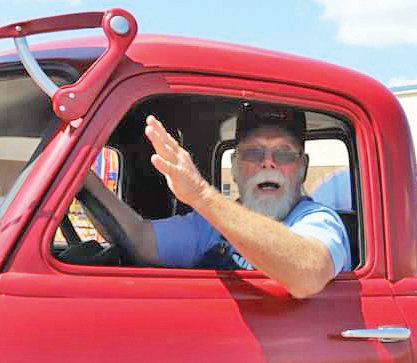 David Perry’s retirement plans for 2023 and beyond include many more parades in which he can drive his customized street rod, a 1949 GMC pickup.
Posted Thursday, November 17, 2022 9:00 am
Jeannie Grimes

In all that he does, David Perry has always loomed a little larger than life.

David, a brother and two sisters grew up on the family farm which his grandfather bought in 1925.

There were chores to be done, but none were too bad. Milking the cow twice a day and mastering mechanical skills that would last a career made for a good life.

“I didn’t like cotton,” he said. “Hoeing didn’t bother me ... but pick a green boll and chunk it at little brother and he’d tell Mama and I’d get a whipping.”

That year he hired on as a mechanic for McClain County District 2.

On December 31, David will retire from his present position – road foreman for the district.

“They were all very good to me,” he said.

He even served as interim District 2 county commissioner for eight months when Tucker died.

Some local farmers have asked him to drive a truck during harvest.

But he’s saving the majority of his free time for his hobby – bringing old cars back to life as street rods.

His pride and joy is a 1949 three-quarter ton GMC pickup which was purchased new from Jody Sparlin.

When he bought the truck from his father-in-law, there were 77,000 miles on the odometer. He is the fourth owner.

Top speed for the truck was about 50 miles per hour.

He’s given it a new purpose and an automatic transmission among other options.

He’s also set the body on a Camaro frame.

He will spend some of his newly freed time helping his brother restore a 1959 Chevrolet Apache pickup with suicide doors.

He loves car shows “when they are close” and parades. Especially parades where he and his red GMC street rod can be participants.

He’s not one content to remain on the sidelines with the spectators while the parade passes by.

Ten years ago, David joined Masonic Lodge 406 in Washington. About five years later, he became a Shriner at the India Shrine Temple in Oklahoma City.

“They’re a good group of men,” he said of the Shriners.

He’s impressed by the creativeness behind the various parade units within the Shrine.

There are everything from old classic cars to go-karts and there’s also a clown unit whose members make balloon animals for the kids.

The Shriners were in Washington’s Christmas parade in 2021 and will be back this year, David said.

Retirement will have its bittersweet side, too.

David will miss the people most.

“I’ve enjoyed working  with the old farmers and people like that,” he said. “It’s sad to see the farms go and (Washington) turning into a bedroom community.

“My closest neighbor when I was growing up was a quarter-mile away.”

Today, David’s son, Aaron, lives on the farm that’s been in the family closing on 98 years.

Aaron and his wife, Colleen, raise corn, soybeans and hay on the farm that is three miles north of the Washington feed store on Ladd Road.

David and Sharon, meanwhile, live not far away on a quarter-section of land he bought in March 1965.

The couple, married for 46 years, met in school and both have roots deepset in the community.

“I just moved her a mile from where we were raised,” David said.

They also have a daughter, Miranda Allen, a stay-at-home mom to their granddaughter Lanay Allen. Miranda is married to George Allen.

In 1979, David and Sharon built their present home.

Retirement means David will hold down the home front while Sharon works for Edward Jones in Pauls Valley.

He intends to remain active in the McClain County Cattlemens Association where he serves on the board.

And he will continue to be a huge supporter of FFA and 4-H. which he describes as “pretty good kids.”

He’ll think of his fellow county workers whenever he drives the backroads that are paved now. All were dirt when he started 30 years ago.

He need look no further than rooftops and Washington Public Schools to note the sea change in his home town.

Total enrollment was 300 in all grades when David graduated. Now it’s more than 1,000.

David is ready for the next chapter and thankful for the last three decades.

“The county has been very, very good to me,” he said.