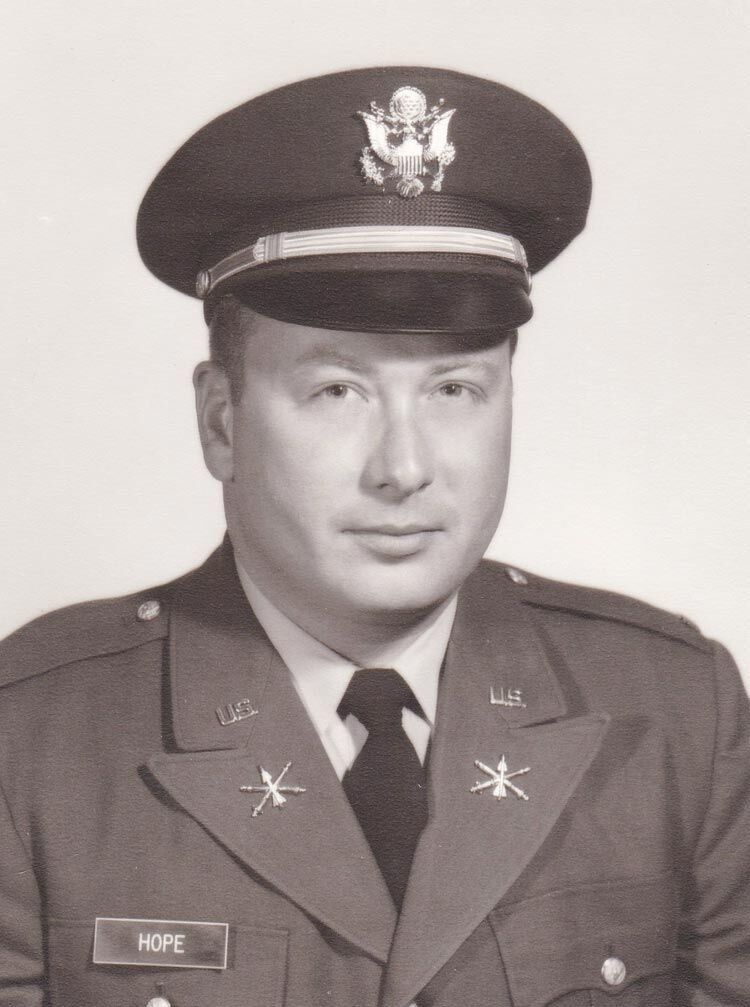 Mr. Hope was born July 18, 1943 in Oklahoma City. He was born on the same date and time of day as his father. He was the oldest of three children born to Judge Garland and Juanita Hope.

He lived with his parents in Huntsville, Texas, during the Second World War.  After the war his parents moved back to Oklahoma City until the second grade when he and his family moved to Maysville, Oklahoma. There he graduated from Maysville High School in 1961. He was in the band and National Honor Society and a member of the First Baptist Church of Maysville. He was a member of Boy Scout Troop 78 and obtained the rank of Star Scout before the troop folded. He attended American Legion Boy’s State in the summer between his junior and senior year of high school.

He entered the University of Oklahoma and was in the Pride of Oklahoma Marching Band, OU Judo Club, Kappa Alpha Fraternity and Army ROTC.

He graduated college from Central State University in the spring of 1967 with a degree in History, and minor in Business Administration. He received his commission in the Army later that spring.

He worked in the diplomatic mail room in the US Embassy in Rome in 1962 where he received his first top secret clearance.

He was sent to Greece. He often said someone in the Pentagon saw his dream sheet and said he was too crazy to go to Vietnam and sent him to Greece. That is his story and he is staying with it.

While in Greece, the Six Day War took place, the king was deposed and Greece and Turkey almost went to war. There were also several smaller incidents that also happened that could have sparked a war. He often said he came as close to getting shot in Greece as might have in Vietnam.

While in Greece, when Greece and Turkey almost went to war, at his base they woke up and the base was surrounded with tanks and half-tracks with mounted quad 50 caliber machine guns all pointed in at them. The official story was the Greek Army was there to protect them.

His mission in Greece was to train the Greek Army in the use of “Special Weapons “and he had his second clearance, Top Secret-Restrictive Data-Two Man Control-Crypto.  He often said the documents he was assigned to deliver often had “Burn Before Reading” stamped on them. He said this in jest.

After serving in Greece he was sent to Fort Bragg, North Carolina, and while there put in for transfer for any place but Fort Bragg including Greenland. He often said his service record would mostly be blacked out. This was due to what he worked with, even the names of the schools he was sent to in the Army, the names were classified. He stayed true to his security oath and never revealed the true nature of his service.

He left the Army after Fort Bragg and went to computer programing school and about the time he was to graduate Congress slashed NASA and the market was flooded with programmers, later he went to work with ASCOT.  He was in the Oklahoma National Guard after leaving the Army and reached the rank of Captain upon leaving the guard.

He was with ASCOT till 1975 when an opportunity to buy a business in Purcell came up and it became later Hope True Value. He was co-owner of that business from then on living in Purcell.

He became affiliated with Purcell Lodge 27 AF & AM, raised a Master Mason and later served as master of the lodge twice. Later he was named one of the lodge trustees and was one of the first two Perpetual Members of that lodge.  He was also a lifetime member of the 1889er’s Society, made up of descendents of those who made the run into the unassigned lands that are now central Oklahoma or were on the 1890 census in said territory.

For the last 25 years he participated in the American Legion wreath laying ceremony at the Maysville War Memorial every Memorial Day.

He was proud to say he was a lifelong DINO, Democrat In Name Only.

His hobbies included hunting, fishing, shooting, photography, reading and computers. In later years he would catch and release and salute game saying he did not want to clean what he caught or shot. He liked to travel and square dance when he was able, he was a member of Single Squares Square Dance Club in Oklahoma City.

Burial will  be at the National Memorial Cemetary in Honolulu, Hawaii.

In lieu of flowers make donations to the Second Chance Animal Sanctuary Inc. or to any Boy Scout troop to help offset membership fees or to its campership fund. A Boy Scout troop and NOT a council office or BSA National, he said that way it will all get to the youth that need help in membership and or summer camp fees.