Uncovering the truth is its own golden reward 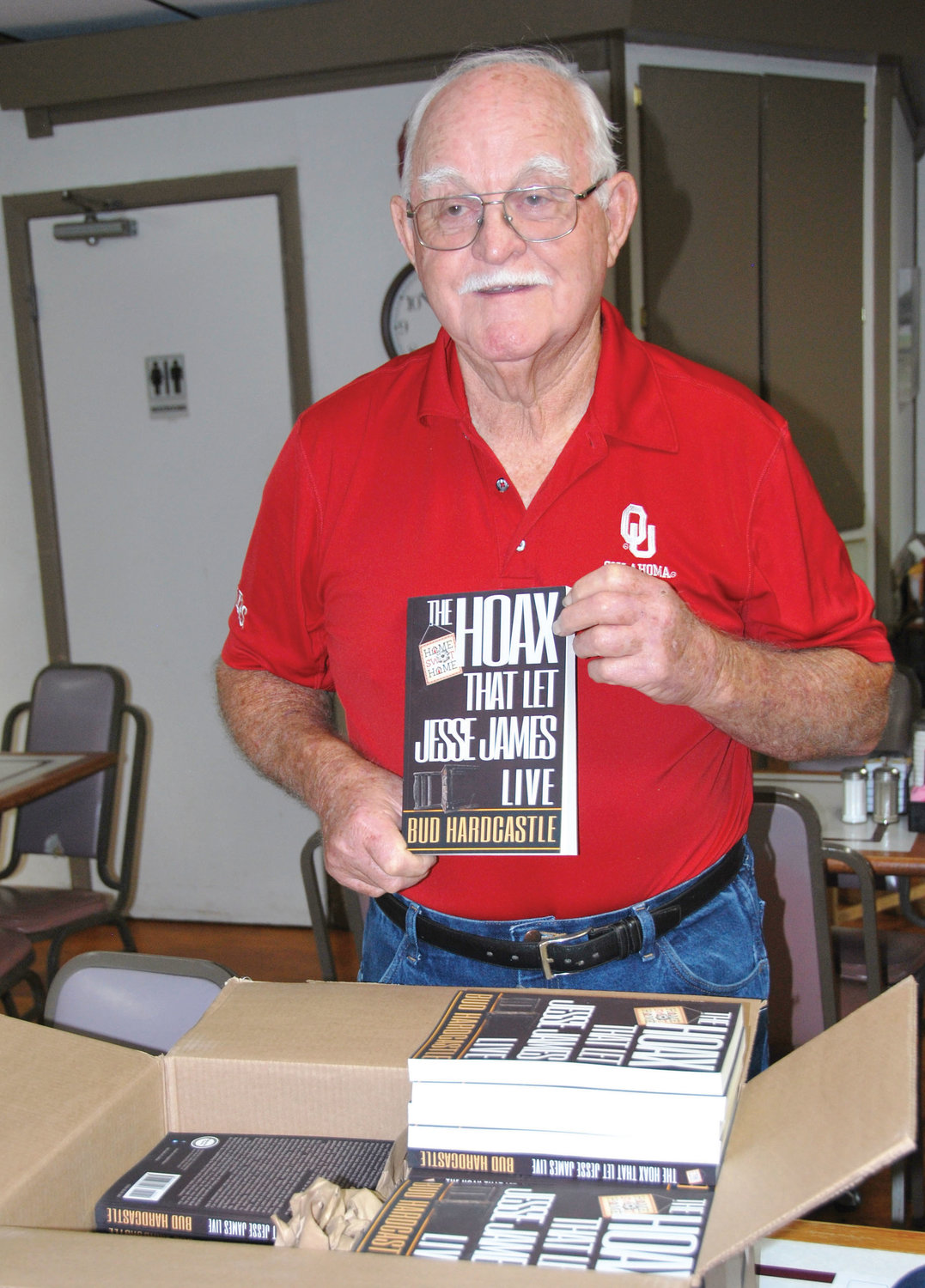 For going on five decades, Bud Hardcastle has chased down a legend.

At 82, he admits he’s “getting a little old to be traipsing up and down the side of a mountain.”

But it’s next to impossible  for him to set aside his obsession with Jesse James, perhaps the greatest outlaw of the Old West.

He’s written a book – “The Hoax That Let Jesse James Live” – that will hit bookstore shelves before year’s end. It will also be available on Amazon.

And he’s soon to publish a second, companion volume.

The books, you see, are Bud’s legacy.

“All I ask is that people keep an open mind,” he said.

The first book is drawn from the written account of Ola Everhart, a third cousin of James who frequently nursed him through illness and injury.

That written account was given to Bud by Everhart’s husband on condition that Bud would continue to tell the truth about Jesse James.

A native son – “I was born in Purcell and I’m still here” –  Bud grew up playing along Walnut Creek.

He played football in high school and enlisted in the Army in 1958.

After the Army, Bud returned to Purcell, spending the next 40 years in the car business.

He started as a salesman for Ed Fretwell Chrysler/Plymouth. After four years, he became the dealership’s general manager.

From there, he struck out on his own, opening a car lot in Purcell.

Bud has always been a history buff with emphasis on Jesse James.

Not convinced that James was shot in the back and killed by Bob Ford, Bud began research in the 1970s that cast doubt on the long-held story. Ford was James’ cousin.

That research led him to a May 19, 1948, article in The Lawton Constitution about J. Frank Dalton, a man claiming to be the famed outlaw.

“The reporters in Lawton found out what he told them was true,” Bud said.

A violent outlaw, Charles Bigelow, had been using James’ name and robbing banks.

In one robbery, Bigelow fired a shot that killed a young boy. James was blamed for the murder.

Bigelow was killed in retaliation and Jesse James “died” with him, resurfacing as the law-abiding Dalton.

“It took the heat off him when they buried Charles Bigelow,” Bud said.

Bud has a copy of the post-mortem report that recorded 30 healed bullet wounds and a scar on his neck from his hanging at the hands of Union troops when he was 15.

When the troops left, James’ mother cut him down and carried him into the house. James recounted later that he didn’t regain consciousness until the next day.

That and other violence directed at his family prompted James to join Quantrill’s raiders and left him with deep animosity towards the Union.

Bud’s research also led him to accounts of the Knights of the Golden Circle.

James, he said, was the organization’s comptroller.

The Knights engaged in bank robberies and train holdups, stealing thousands in gold and silver coins.

They cached the loot from Oklahoma to Canada, relying on maps and obscure carvings to pinpoint the locations of the caches.

Their intent was to fund a second Civil War in which the Confederacy would lay waste to the Union.

An old man owned the site and invited Bud to run a metal detector across his garden.

He struck gold – literally – and saw the $20 gold pieces which the man kept without sharing.

According to Bud, there are 18 “jack loads” of gold that James cached in the Wichita Mountains near Lone Hill.

Bud has acquired “three or four” of James’ maps from the outlaw’s grandsons.

Over the years, he’s unearthed or located probable sites of caches.

Others have helped Bud in his quest over the years.

His second book also tells their story and is dedicated to one in particular, the late Charlie Holman from Hobart.

“I always tried to have someone with me,” Bud said.

He recalled one outing that he took alone. After scaling a mountain, he saw a big dog drinking from a water hole.

Thinking he would take the dog home with him, he called out to the animal.

Startled, it turned and looked toward him. His big dog was a mountain lion!

Bud is looking forward to his next treasure hunt in a couple weeks.

“If you don’t find carvings, you’re not in a good spot,” he said.