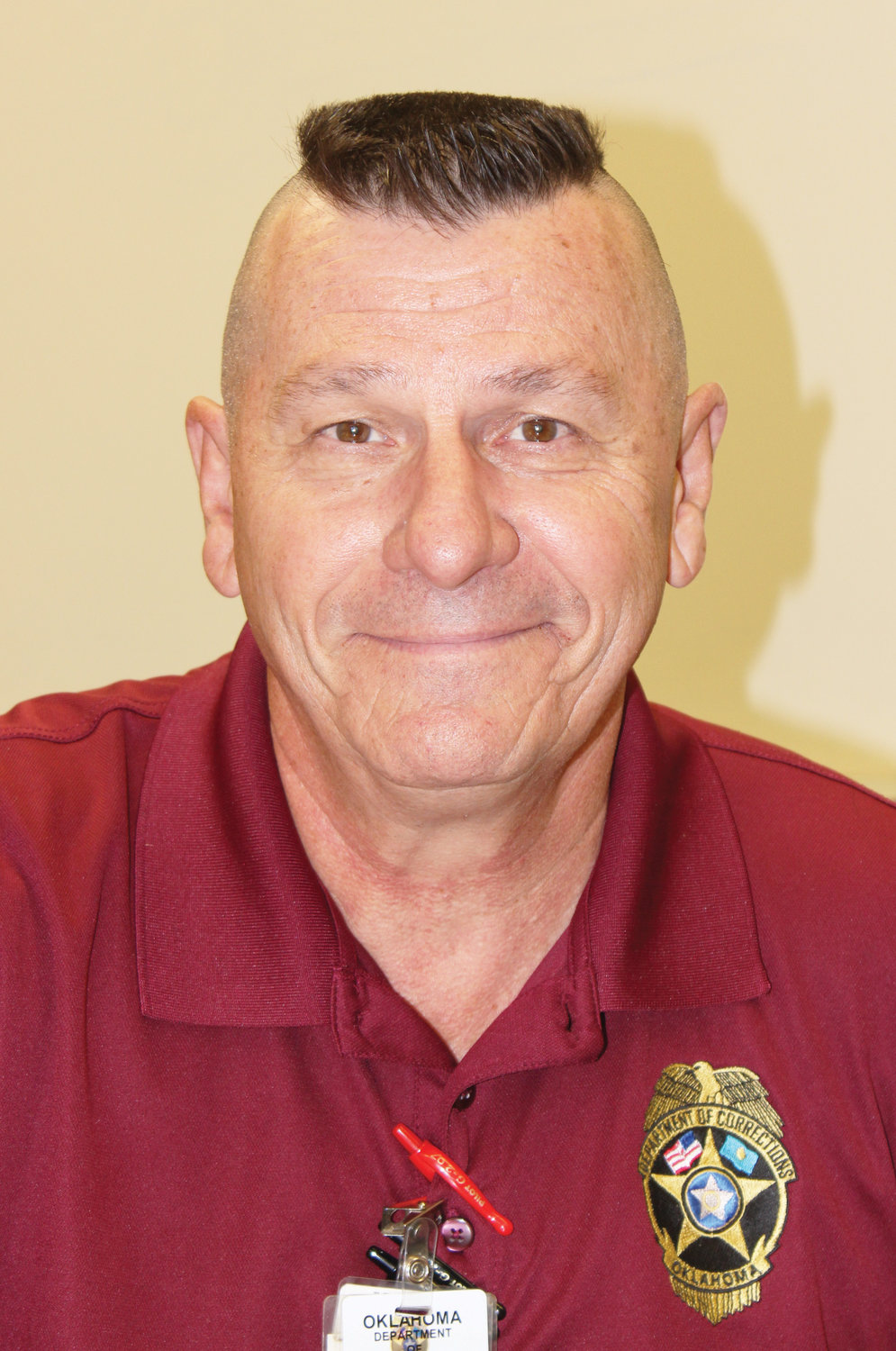 A visitor meeting Mike Rogers for the first time might well take one look and ask, “Marine Corps?”

It shows and no doubt his military bearing fares well in his present position of deputy warden at Lexington Assessment & Reception Center.

He’s been in corrections since July 1990 when he started as a corrections officer at James Crabtree Correctional Center in Helena.

After more than 31 years, he is living proof of what he tells those just starting careers with the Oklahoma Department of Corrections.

“I always say to new hires the funny thing about corrections is it chooses you,” he said.

But first came the Army.

He enlisted in 1984 and after basic training at Ft. Sill was assigned to the 189th Field Artillery in northwest Oklahoma.

He later completed the Guard’s Officer Candidate School and was commissioned a second lieutenant. He checked off the Officer Basic Course at Ft. Sill in 1989.

“I was an officer 10 years and then resigned my commission,” he said.

He spent the next 12 years as a field artillery instructor.

Following 9-11, he was called up and spent one year on active duty.

But the Army didn’t send him to the sands of the Middle East or the mountains of Afghanistan.

Instead, his orders were for Ft. Sill where he was an instructor for field artillery forward observers.

Mike entered corrections thinking he would use the experience to realize his goal of becoming an Oklahoma Highway Patrol trooper.

Life had other plans.

He applied for the OHP Academy in 1996 and while  his scores were among the highest, he wasn’t selected.

Instead, he took another look at his options and reassessed his goals.

“It’s a good, solid career,” he said of corrections. “I decided let’s double down with corrections and see where it takes me.

“This field chooses you.”

Where its taken him was up through the ranks.

He’s spent the majority of his career at Crabtree.

Among the different hats he wore there were correction activities officer, case manager, unit manager and chief of security.

He was also assigned different taskings – auditing or sitting on interview boards – for the department which sent him on visits to all but one of the state’s 23 prison facilities.

He came to LARC in January during the height of the COVID pandemic’s first wave.

“I’ve enjoyed every job with corrections,” he said, quickly listing unit manager as the most fun and deputy warden as the favorite.

Mike was born in Kiowa, Kans., and grew up near Morris, Okla. He graduated from Hennessey High School.

His wife, Cyndi, is also from Kansas. They’ve been married 32 years.

Cyndi also works for corrections in human resources and classification.

The LARC posting puts them closer to two of their three adult children – sons Jake and Josh who live at Blanchard and Norman, respectively.

A daughter, Ali, is a teacher and coach in Missouri.

They also have four grandchildren – Ada, Henry, Blake and Rowan.

Those Kansas roots run deep and for 20 years while he worked  at Crabtree, Mike commuted from Medicine Lodge to Helena.

The drive was 71 miles each way.

“I saw a lot of beautiful sunsets and sunrises,” he said.

The commutes ended in March 2019 when he was promoted to chief of security and was required to live on the grounds.

Mike estimates he’s come to know 10,000 or more inmates during his career.

It’s a rare – but uplifting – experience when he meets a former inmate who is succeeding outside the walls.

There’s no sweeter sound than hearing “the way you treated  me changed the way I think.”

Mike’s reaction is always the same.

“Gosh, I made a difference in someone else’s life,” he said.

Mike said his job has always been about service – both to staff and inmates.

That point was especially driven home by COVID.

“We didn’t shut down because of COVID,” he said, pointing out the obvious that inmates are a “captive audience.”

The initial response to the virus was harder because COVID was something new.

But the department has always had a policy for dealing with an epidemic such as the flu.

“We had to tweak the policy we had (for COVID),” he said. “I think the agency adjusted well. It would have been easy to not handle it correctly, to say this is too much.”

All that has happened has stressed staff to the max.

Mike has to deal with that, too.

While the minimum security unit at LARC has returned to normal operations, the remainder of the facility remains in lockdown.

That translates to more demands on staff.

“The inmates’ health and safety has to be the main thing,” Mike said. “They are wards of the state. (But) lockdowns are a necessary evil.”

Mike has learned the value of programs that enable inmates to turn their lives around.

But in the final analysis, such programs come down to money and staffing.

LARC’s longtime Friends for Folks dog training program  has closed. Mike hopes one day it will come back.

“We can only do so much with the money we are given,” he said.

He is excited about a new program offered through Oklahoma Baptist University, however.

The institution has started a four-year divinity degree program for long-term inmates.

The goal is once those inmates graduate to transfer them to other facilities where they can assist staff chaplains.

“It’s been a very difficult two or three years,” he said. “Programs are the only things that are going to make a difference. And the inmate has to want to change.”

Quail are his favorite, pheasant not so much.

But he’s not willing to step back just yet.

“I enjoy working for corrections and as short-staffed as we are, we need everyone we can get.”

After all, it’s what happens when corrections chooses you.

“If you join for glory or money, you’re in the wrong job,” he said.