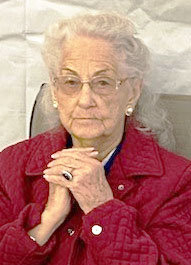 Zexia Dean was born January 2, 1931, in Iron Chapel, Okla. She was the eldest of six children born to Howard Jefferson Roberts and Grace Mildred (Carr) Roberts.

Zexia Dean spent her early years near Dibble and Johnson, before moving to the Goldsby area. There she met Harold Otis Ham and fell in love. They were married on February 26, 1949.  They made their home on a family farm in Washington, Okla., where they raised their three children: Harold Dean, Howard Otis, and La Fa. Zexia Dean worked tirelessly at home, on the farm, and assisting Harold in his dirt work business. She also spent several years working at the family dirt racetrack in Goldsby.

Zexia Dean enjoyed spending time with family and friends, cooking, sewing, gardening, and never missed a chance to travel. She had an adventurous spirit and lived her life to the fullest. She loved to stay busy and was an active member of the McClain County Home Extension Club.

She was a woman of great faith and longtime member of the Washington Church of Christ. She always greeted everyone with a smile and was well known for her elegance, welcoming hospitality, and fun-loving nature.

Her sweet smile and unfailing kindness will be missed by all.

She was preceded in death by her husband, Harold Otis Ham; parents, Howard and Grace Roberts; and siblings, TG Roberts, Marilyn Davis and Bill Roberts.