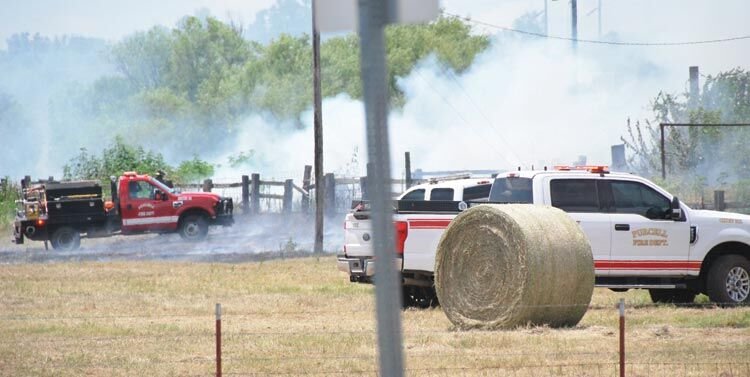 Drying grass and giant round bales of hay made for fuel for a good sized grass fire just after 1 p.m. Tuesday at Hardcastle Blvd. and Wyatt Road, just west of the Chickasaw Nation Area Office.

When firefighters arrived on the scene they found giant bales of hay and grass on fire.

The blaze scorched two acres of grassland and destroyed four round bales of hay.

A total of 13 firefighters responded to the blaze including five fire fighting apparatus.

No one was injured in the blaze but it was a busy afternoon beginning with the 1:15 p.m. fire call.

Station One and Wadley’s EMS were called to at least two separate illness calls during the time firemen were battling the wind driven flames.

Firemen said the flames were ignited due to either a malfunction or mechanical failure of farm equipment at the scene. Tanker trucks were used to bring water to the pumpers on scene.

No one was injured. Firefighters spent nearly two hours fighting the fire leaving the scene at 3:01 p.m.

Firefighters were recalled to the same location at 5:05 p.m. as the fire had rekindled.