Defense is imposing its will on opponents 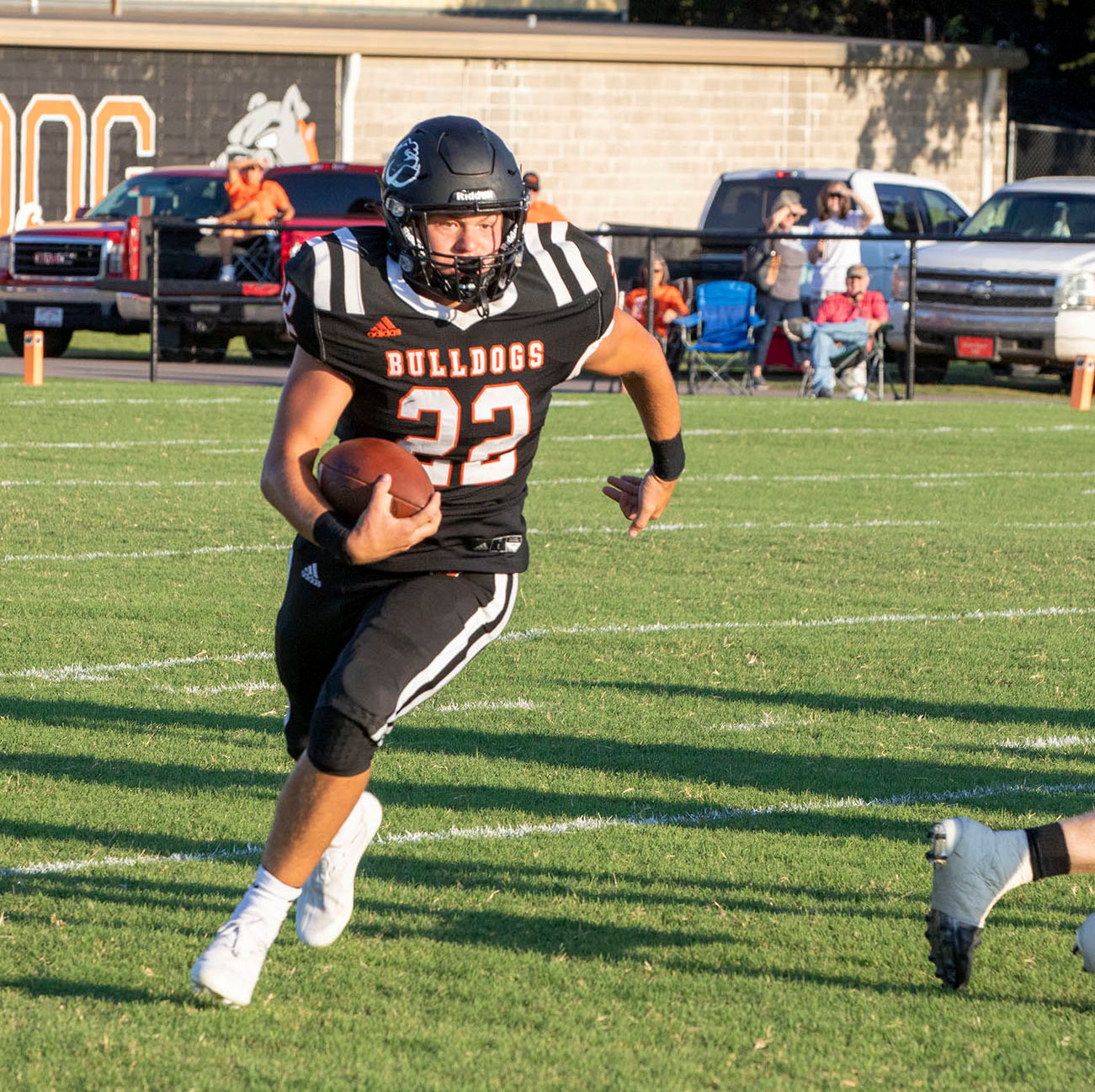 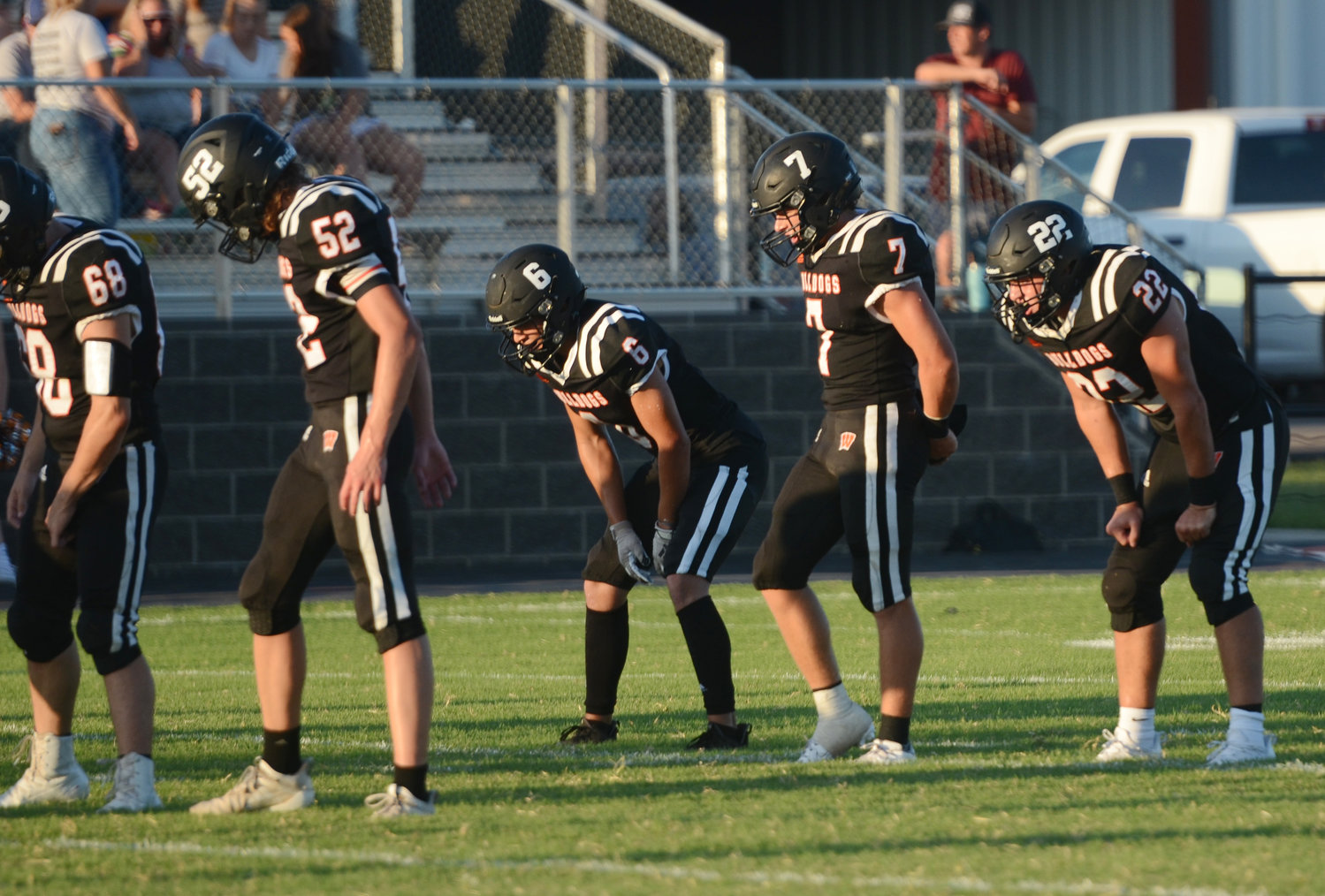 The Wayne offense racked up 473 yards rushing and seven touchdowns Friday night thanks in part to the play of linemen Maddox Mantooth (68) and Kevin Bynum (52), as well as backs Jairo Hernandez (6), Ethan Mullins (7) and Brannon Lewelling (22). The Bulldogs defeated Walters 48-16. They travel to Lexington Friday for a 7:30 p.m. kick.
John Denny Montgomery
Previous Next
Posted Thursday, September 9, 2021 9:00 am
John Denny Montgomery

Wayne relied on their defense Friday night to send Walters home packing with a 48-16 loss.

The Bulldogs held Walters to -22 yards rushing and 25 total yards in the contest.

“Our defense really helped us out and hats off to them,” Wayne head coach Brandon Sharp said. “The defense was able to play the whole game and keep Walters from doing much.”

The Wayne offense opened the first quarter like a herd of wild horses.

Brannon Lewelling scored on a 30-yard run to begin the scoring.

Kaleb Madden’s point-after attempt was no good but he made up for it by catching an Ethan Mullins pass for a two point conversion after Wayne’s next score.

The touchdown came courtesy of a 76-yard Mullins jaunt through the Walters defense.

Mullins scored two more touchdowns in the first quarter on runs of 22 and 65 yards.

Madden made good on one of two of the PATs.

The Bulldog offense went quiet in the second quarter thanks in part to ball security issues.

“We got sloppy and fumbled three times,” Sharp said. “We weren’t securing the ball like we need to be doing.”

Wayne righted the ship at halftime though and came out swinging again offensively in the third quarter.

Mullins first scored on a 3-yard run, followed by a 1-yard run by Lewelling and a 10-yard run by Rhett Kennedy.

Kennedy’s touchdown was followed by a successful PAT kick by freshman Adolfo Vasquez.

“We put the game away in the third quarter when we scored the three touchdowns,” Sharp said. “It was a weird game how we jumped out on them so fast. Then it was like we tried to put it on cruise control and you can’t do that.”

Wayne finished the night with 473 yards rushing as a team.

Mullins led the way individually with 275 yards on 13 carries and four touchdowns.

“He was doing what Ethan does,” Sharp said. “He was running well and seeing things.”

Lewelling rushed for 86 yards on eight carries and Kennedy finished with 24 yards on two carries.

Kennedy also had one catch for 20 yards.

The Wayne offensive line continues to show improvement and Sharp expects them to continue getting better.

“We have to keep working,” Sharp said. “We have to get better and we will. We have five seniors up front on the line.

“We have a long way to go as a team but we feel good about where we are. We have the potential to be a good football team.”

The Wayne defense kept pressure on the Walters quarterback and limited his chances to make plays against the Bulldogs.

He was sacked six times and it benefitted the Wayne secondary.

“The back end played better at times, but they’re still peeking into the backfield,” Sharp said. “Walters could have hit us with big plays a couple times but luckily we were pressuring the quarterback enough.”

Maddox Mantooth recorded a team-high 10 tackles to go along with a forced fumble.

“Maddox had a really nice game and played well from his defensive tackle position,” Sharp said.

Lewelling had eight tackles, forced a fumble and recovered a fumble. Mullins had seven stops, a sack and a fumble recovery.

Wayne travels to Lexington Friday for a 7:30 p.m. kick with the other Bulldogs.

“We got to looking at their roster and they’re similar to us in they’re a senior-dominated team,” Sharp said. “They’ll be licking their chops to play us after we beat them last year.

“They will try to get the ball to No. 6 (Heath Winterton). They have good receivers too and we’ll have to cover well. It’s always fun to play a team so close to us (geographically).”

Sharp’s nominee for Heart of Oklahoma Offensive Lineman of the Week was Andy Lee. The big senior graded out at 80%.

His nominee for Heart of Oklahoma Defensive Player of the Week was Brannon Lewelling. Lewelling had eight tackles, forced a fumble and recovered one.

Mantooth registered 10 tackles, forced a fumble and had a sack.