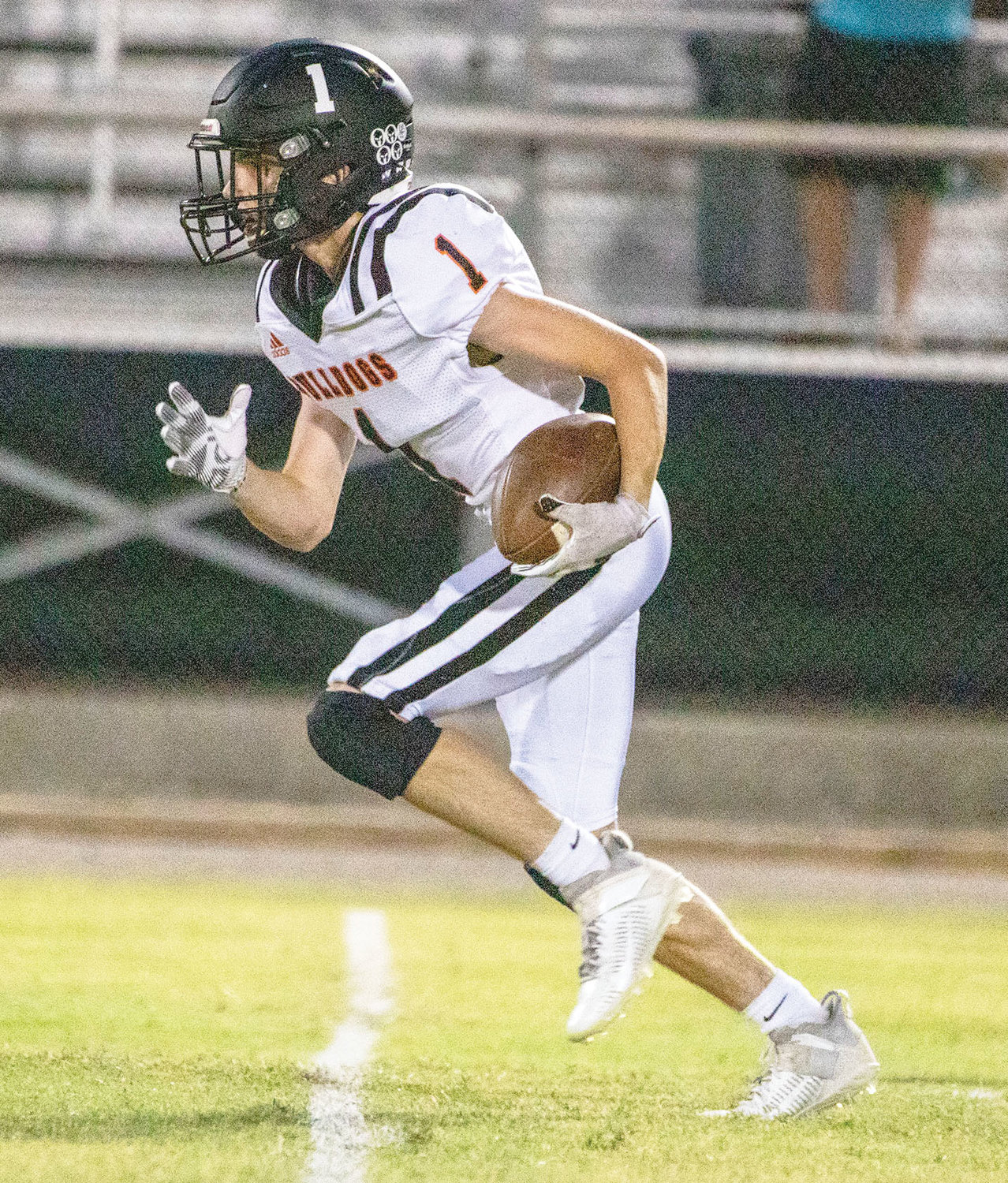 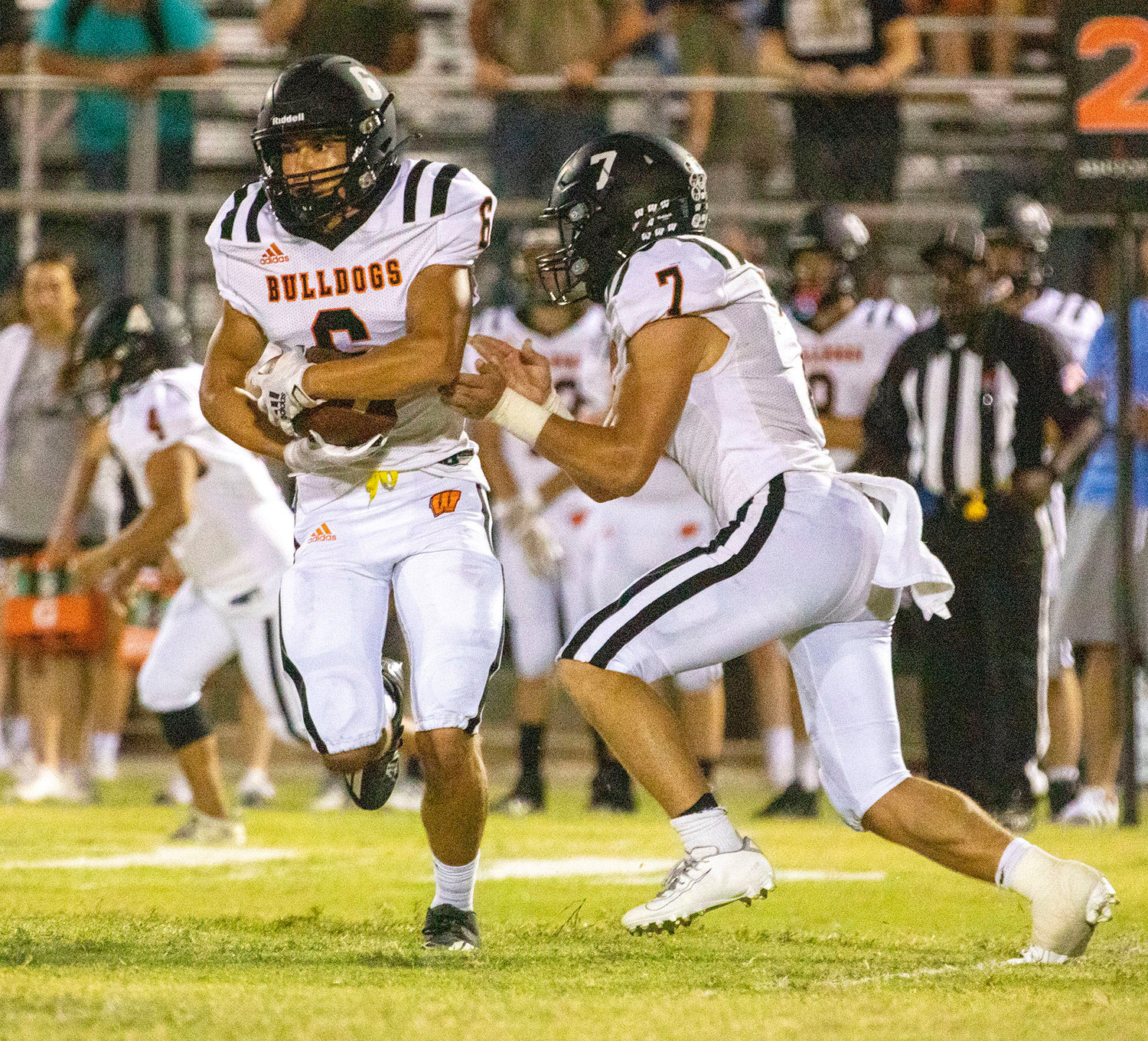 The Wayne defense continues to play at a high level for head coach Brandon Sharp and staff.

They leaned on their swarming defense Friday night at Lexington to claim a 46-6 win and improve their record to 3-0.

Through three games the first-team Bulldog defense has not allowed a point and no team has finished a game with positive rushing yards.

“Our defense was all over the place and absolutely got after them,” Sharp said. “The defense is playing well right now.”

Wayne opened the scoring in the first quarter with an 80-yard run by senior quarterback Ethan Mullins. Mullins also scored touchdowns on runs of 4, 25 and 6.

Mullins ended the game with 275 yards on 18 carries with four touchdowns. He has almost 800 rushing yards through three games and has yet to play in the fourth quarter of a game.

Junior Rhett Kennedy found paydirt in the first quarter as well on a 28-yard run.

Wayne led 12-0 after the first quarter after a failed PAT and unsuccessful two-point try.

Lexington’s Josh Scott returned a kick for their only points of the game.

“A couple of our guys got out of their lanes and Scott is really fast,” Sharp said.

Brannon Lewelling joined the touchdown club in the second quarter with a 15-yard plunge and Wayne’s 28 second-quarter points gave the Bulldogs a 40-6 lead at halftime.

Jairo Hernandez scored a touchdown on a 17-yard run after halftime. Hernandez finished the night with 21 yards on four carries.

“We have some really good weapons on offense,” Sharp said. “When we get other guys involved our offense can get rolling.”

Lewelling averaged 10 yards per rush and finished with 71 yards on seven carries and a touchdown.

It’s the defense that Wayne hangs its hat on.

“We haven’t let a team get positive rushing yards on us yet,” Sharp said.

Lewelling and Mullins each had seven tackles and two sacks. Mullins added an interception to his stat sheet.

Defensive ends Cody Davis and Kevin Bynum both had two tackles and a sack.

In all, Wayne sacked Lexington 10 times.

“We were trying to keep (Heath) Winterton contained and did,” Sharp said. “Our defensive back end played better. They were in position and battling all night and we had lots of pass deflections. They’re athletic.

“Our defensive strategy is to man up in the secondary and let the front seven focus on stopping the run.”

The win over Lexington was Wayne’s second victory over their neighbor Bulldogs in as many years.

“It’s always good to beat a rival from down the road,” Sharp said. “The kids are playing well and we want to keep getting better.”

Sharp’s nominee for Heart of Oklahoma Offensive Lineman of the Week was Andy Lee. He graded out at 86% from his center position.

Sharp’s nominee for Heart of Oklahoma Defensive Player of the Week was Brannon Lewelling. He had seven tackles and two sack.

Mantooth registered four tackles and had a sack.

The Bulldogs are off this week and will host Wynnewood Friday, September 24 at 7 p.m.