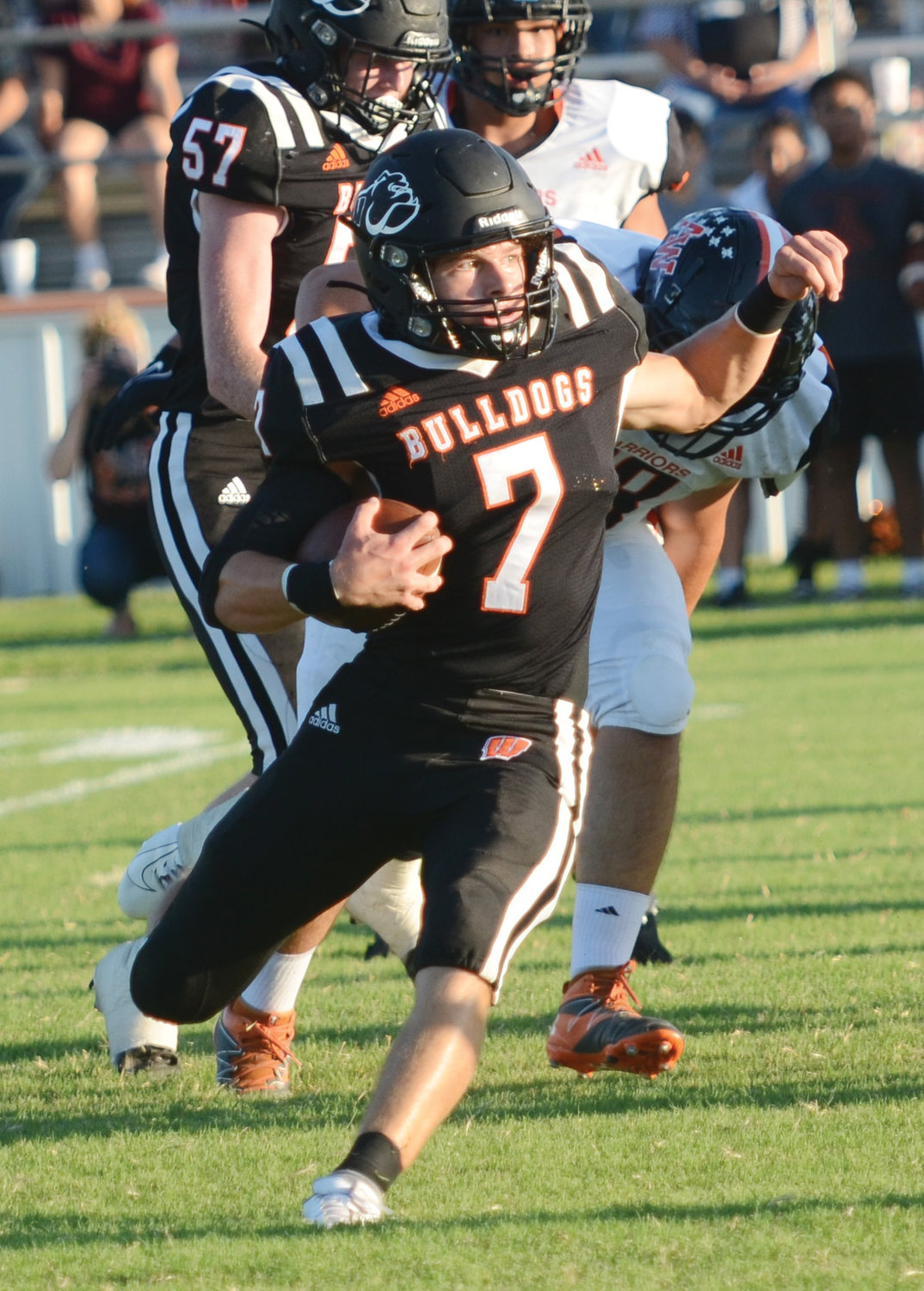 After a slower-than-usual start for the Wayne offense, they plowed the Rush Springs defense Friday night for 532 yards in their 54-14 win.

The senior averaged an eye-popping 20 yards per carry.

He scored touchdowns on runs of 5,8 45 and 45 and all was accomplished through three quarters of play.

He also threw a 42-yard touchdown pass to Kaleb Madden with seven seconds remaining in the first half.

Wayne scored five touchdowns in the first half to take a 34-6 lead into halftime.

“We got off to a slow start but we took care of business after we got going,” Wayne head coach Brandon Sharp said. “We got after it in the second quarter.”

It wasn’t just Mullins tearing up the turf for the Bulldogs.

His fellow senior Brannon Lewelling rushed for 96 yards on four carries and had two scores himself - one from four yards out and another on a 42-yard scamper.

Madden also scored a rushing touchdown on a 19-yard jet sweep for his second touchdown of the day. He finished with 61 yards of offense.

Jairo Hernandez had five carries for 22 yards and Rhett Kennedy had one carry for eight yards.

Dom Sampson also had one carry, taking his for 13 yards.

As a team Wayne finished the night with 532 yards rushing.

“The offensive line played pretty well,” Sharp said. “When you rush for that many (yards) you’re playing pretty good.”

“Being able to get all these kids some carries makes teams have to worry about other things and it helps our offense,” Sharp said.

The first-team Bulldog defense gave up its first score of the season on a busted play in the second quarter against Rush Springs.

But past that Wayne was the normal, stingy  unit that’s propelled the team so far this season.

“We had two busts in the game and the one they scored on was a stunt and we didn’t get the line strength called right,” Sharp said. “It was another good game and each game the kids are getting better. If we hadn’t have had the two busts (Rush Springs) would have been in negative yards.”

Lewelling and Mullins each registered 10 tackles.

Kennedy had six tackles and Kevin Bynum threw the quarterback for a sack.

Maddox Mantooth had a huge game in the interior of Wayne’s defense, accounting for nine tackles.

“When you get nine tackles at defensive tackle you’re being pretty active,” Sharp said.

Wayne travels to Healdton (1-4) Friday night for a District showdown with the Bulldogs.

Healdton is 0-2 in Districts but Sharp says their record doesn’t sum up their talent.

“They’ve played 2A schools and also good teams like Dibble and Elmore City,” he said. “They’ve put up points and have been in every game.”

Offensively they operate out of the shotgun and use motion and shifts to exploit mismatches for the opposing team.

“They attack you with multiple hats in the hole and run jet sweeps, which they’ll boot off of,” Sharp said. “They are big and physical up front.”

Healdton runs a 4-4 on defense and will have the biggest defensive line Wayne has seen to this point.

“Their size will present problems and we’ll have to have good leverage and stay glued up,” Sharp said. “We’ll have to get after it.”

Sharp’s nominee for Heart of Oklahoma Offensive Lineman of the Week was Andy Lee. He graded out at 82% from his center position.

Sharp’s nominee for Heart of Oklahoma Defensive Player of the Week was Brannon Lewelling. He had 10 tackles.

Wayne and Healdton kickoff at 7 p.m.