Wayne out in Districts 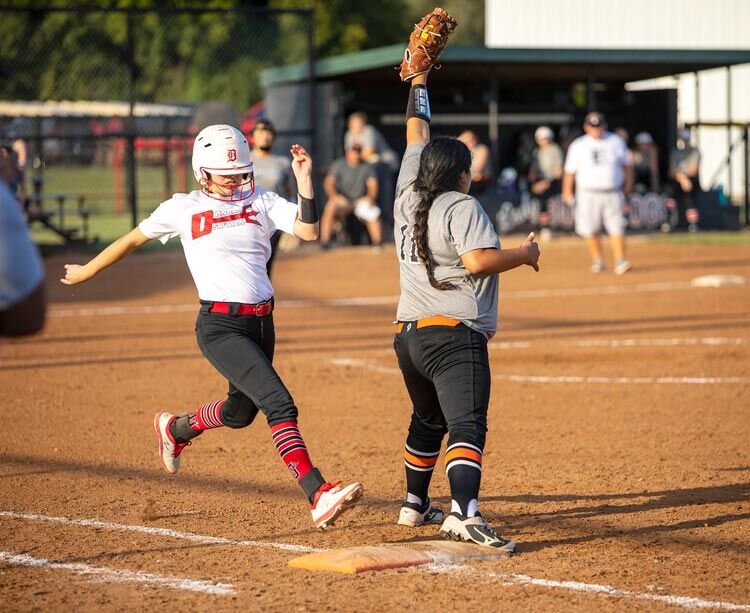 Mayce Trejo catches the ball for an out against Duncan. Wayne’s season ended Friday after they fell 9-8 to Elmore City in the District tournament.

On Thursday they fell to the Lady Badgers in game one, 7-4. But, they rallied for game two, winning 2-1. This forced the if-necessary game on Friday afternoon.

Despite good hitting and defense, Wayne fell to Elmore City 9-8 ending their season. Head coach Charles Durrence and his Lady Bulldogs finished the season with a 19-9 record.

“We played pretty well. We were hitting the ball well and playing good defense. This was a tough loss,” Durrence said.

Wayne was on the board first, scoring three runs in the top of the third inning. But, Elmore City answered with five runs in the bottom half.

Then the Lady Badgers added one run in each of the next two innings.

Trailing 7-4, Wayne ran four runs across the plate in the top of the seventh to take the lead.

But, Elmore City just would not go away. They added a run in the bottom of the seventh to knot the game at eight-all.

In the extra inning, Elmore City scored the winning run ending the game and the Lady Bulldogs’ season.

“Overall, we didn’t win, but I’m extremely proud of the girls. We played hard and did a lot of good things,” Durrence said.

Wayne tallied 12 hits in the loss, including a three RBI day for Daliyah Fuentes and a triple from Kamryn Moss.

In game one on Thursday, Wayne got down early and just didn’t have enough innings to get back the lead, according to the coach.

“It took us about three innings to get our bats going and we just ran out of innings,” Durrence said.

Junior Haiden Parker was in the circle for the loss. She pitched seven innings and fanned five batters.

Walck led the team at the plate, going 2-4 with two RBIs. Parker went 2-3 with an RBI and Haylee Durrence went 1-3 with and RBI.

Faith Brazell pitched all seven innings. She allowed just one run and had three strikeouts.

“We played really good defense. We hit the ball hard, and right at them.”

Wayne had five hits in the win.

Though it was a tough ending to a successful season, Durrence is excited about what the future holds.

“Our future is bright. I know I can take this group anywhere and they’ll go compete with anyone.

“We had high expectations for the season, but I know the girls will carry this momentum into basketball and then into slow-pitch,” Durrence said.

The Lady Bulldogs lose two seniors in Allie Walck and Kamryn Moss. Both have been heavy contributors to Wayne softball.

“Our two seniors will be hard to replace. But I know we have a bunch of younger girls who will step up and fill those big holes,” Durrence said.