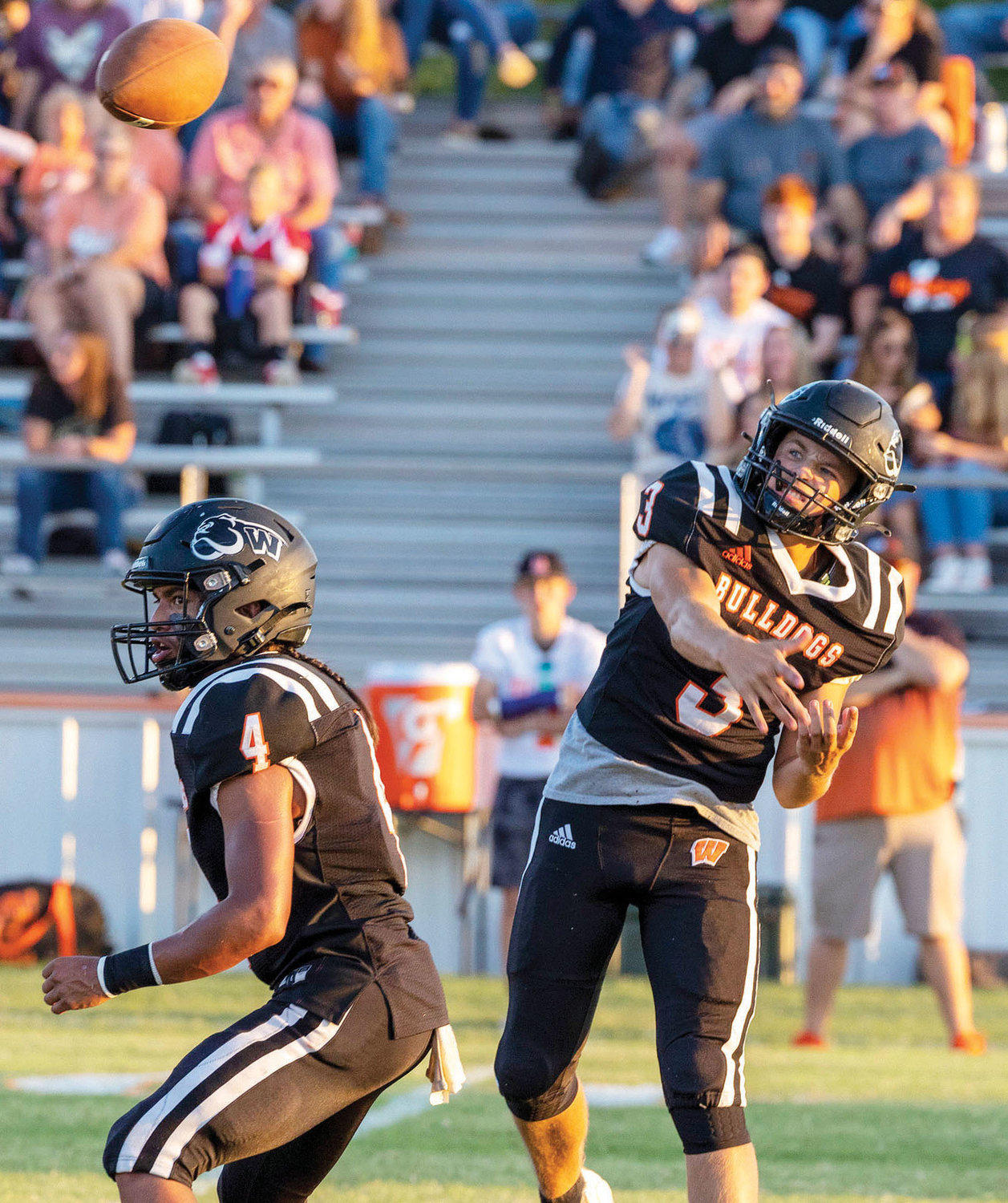 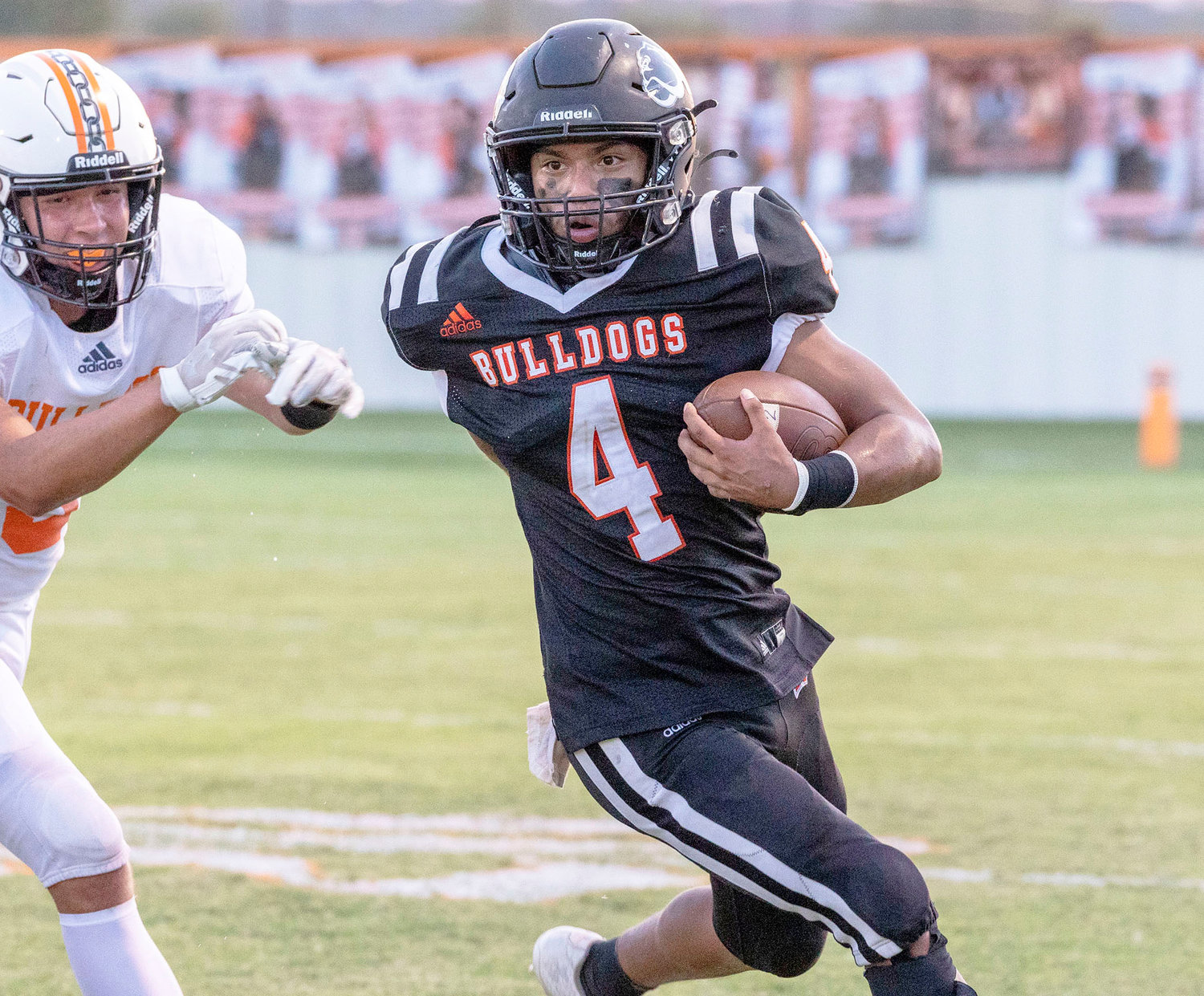 Wayne junior Isaac Hill (4) runs around the corner of the defense during the Bulldogs’ 55-16 win over Lexington Friday. Hill carried the ball 15 times for 176 yards and scored three touchdowns in the contest.
Greg Gaston - double g images
Previous Next
Posted Thursday, September 15, 2022 9:00 am
John Denny Montgomery

The Wayne Bulldogs notched their first victory of the 2022 football season Friday night with a 55-16 win over the neighboring Lexington Bulldogs.

Wayne head coach Brandon Sharp was happy with his team’s improvement from their week zero game against Konawa.

“This week was more of what we expected out of our offense,” he said.

Senior receiver Kaleb Madden had a breakout game for the Bulldogs.

“Kaleb had 182 yards receiving and three touchdowns on six catches,” Sharp said. “We knew we needed to get him the ball more and we’ll keep doing that.”

Sophomore quarterback Jaxon Dill was 6-8 passing  for 187 yards and three touchdowns and continues to improve his play.

The Wayne ground game was also improved from the last time they stepped on the field.

Junior Isaac Hill had 15 carries for 176 yards and three touchdowns.

Senior Rhett Kennedy scored on a two-yard run out of the wildcat formation in the second quarter.

“He did a good job,” Sharp said of his Swiss Army Knife player.

The Bulldogs finished with 277 yards rushing and 464 total yards.

Sharp was also pleased with how his running backs found holes and used leverage of blocks to gain extra yards.

“I told our running backs they have to do a lot better  reading blocks and cutting off of them,” Sharp said.

Freshman Noah Alviso helped clear the path between the tackles, while the Bulldogs were running the trap play.

“We did more pulling this week and the backs were seeing the holes.”

The Wayne defense also saw improvement from the previous game.

They held Lexington to under 100 yards rushing.

They gave up a big play to start the game and Lexington quickly scored on their first possession.

Lexington’s other touchdown came on a 4th and 8 play when Wayne didn’t get the defensive signal relayed in time. Lexington made them pay for the mistake.

Wayne’s defense played better as the game went on.

“We settled in and did a better job tackling,” Sharp said. “We gave up more yards than we wanted to give up but the defense did a decent job.

“We covered receivers well and Lexington was 4-15 passing with an interception.”

Sharp said his players played their assignments better but need to improve on tackling in space.

“We’ll continue to get better at that,” he said. “We need to get used to game speed and playing games will do that.”

Adolfo Vasquez led the team again in tackles with 10 from his linebacker spot.

Kennedy and Hill each had six tackles and Hill intercepted a Lexington pass.

Kyler Cantrell also had three tackles and caused a fumble.

“We gave up a couple of big plays but once we get things ironed out we have a chance to be a good defense.”

“They have a really explosive quarterback who will be the best athlete we’ve seen to this point,” Sharp said. “Konawa had a good one too and this kid is better. It’s kind of scary.”

Offensively the Ruf-Nex base out of the Wing-T and run some flex bone.

“They try to confuse you to run the quarterback.”

Defensively they run a version of the 4-3 but will alter it based on what the opposing offense does.

“They’re fast in the back end and have a good defensive end. The linebackers are smaller but run well,” Sharp said. “It’s another game we have to block well. If we do that we feel like we have a good chance. If not, anything can happen.”

Adolfo Vasquez drew the Defensive Player of the Week nomination.

Casey Kane was nominated for Offensive Lineman of the Week with a 72% grade.

Kyler Cantrell was the Defensive Lineman of the Week nominee.