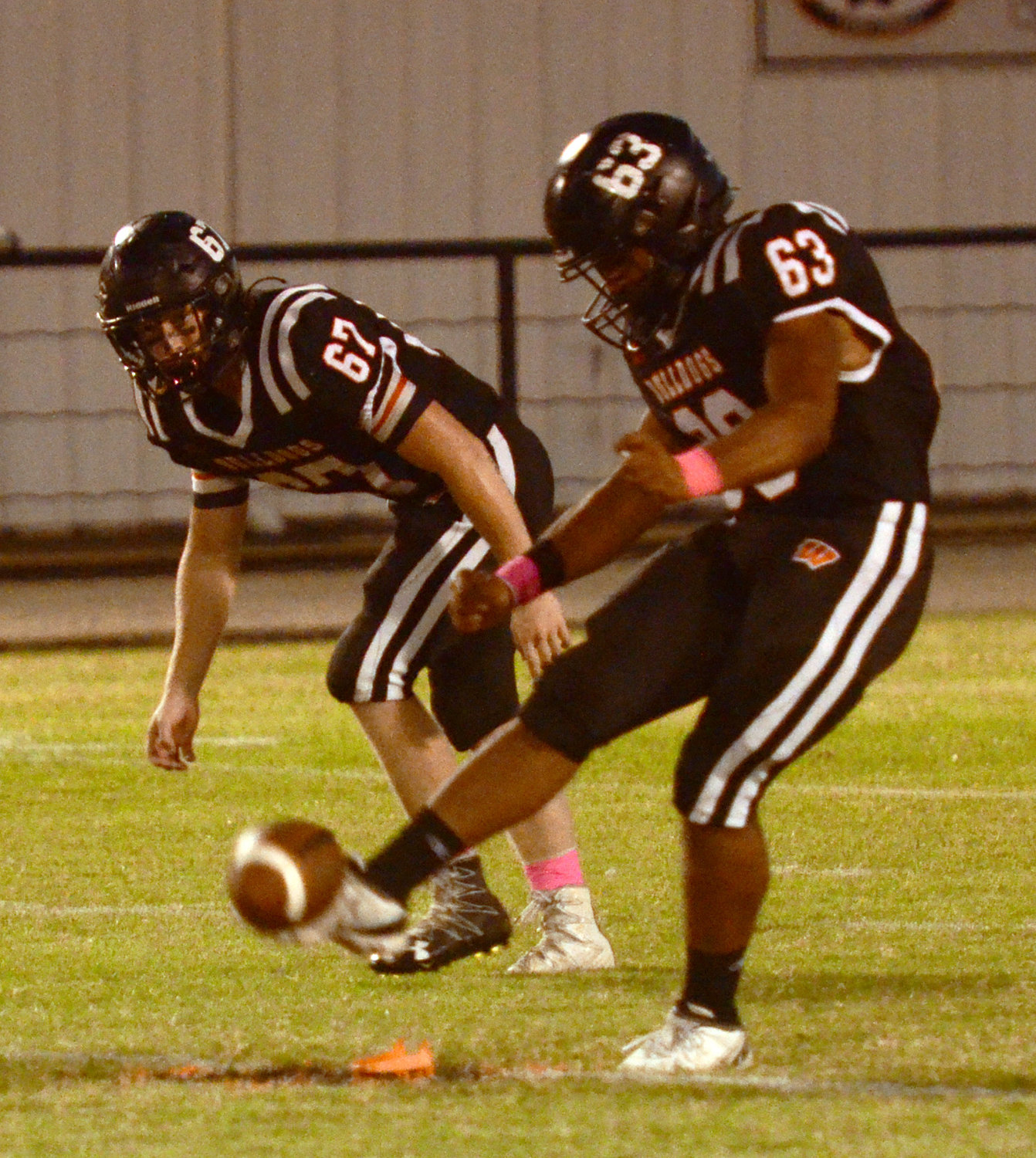 Wayne freshman Adolfo Vasquez kicks off for the Bulldogs. Wayne travels to Ringling Friday night for a 7 p.m. kickoff against the Blue Devils.
John Denny Montgomery 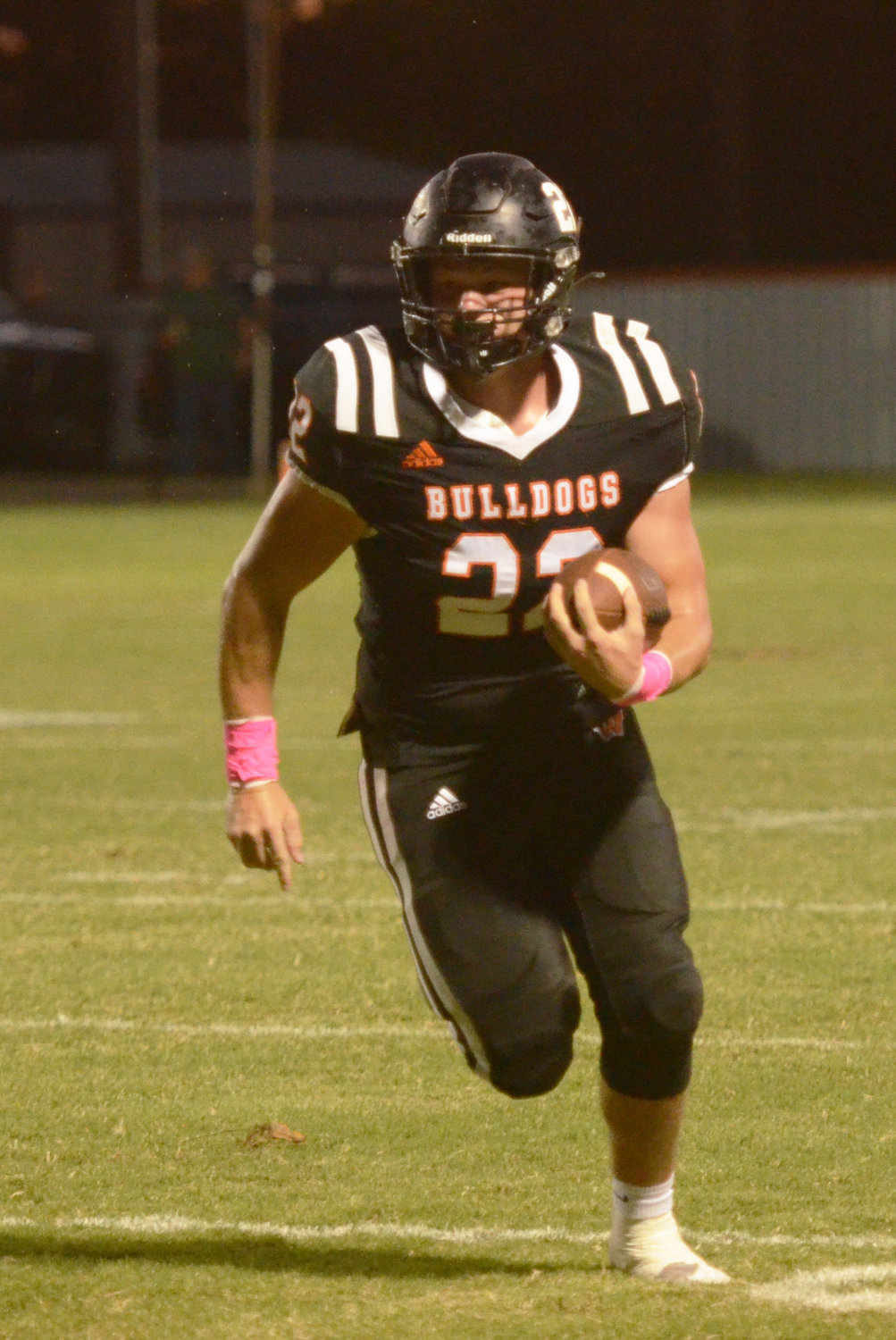 Elmore City’s defense did the best job of bottling up the Wayne run game of any team to date and held the Bulldogs to 210 yards rushing.

Super senior Ethan Mullins was limited to 180 yards rushing on 25 carries. He scored twice on the ground and once through the air – a 63-yard strike to Kaleb Madden.

Madden scored on runs of four and 16 yards.

Brannon Lewelling scored Wayne’s first touchdown of the game on a one-yard plunge.

It came in the second quarter after Wayne had fallen behind 6-0. Wayne took a 14-6 lead into the halftime locker room after Mullins’ four-yard run and Lewelling’s successful two-point conversion run.

Wayne took the third quarter off and gave up three unanswered touchdowns to get into a 28-14 hole.

“Our defense played really well in the first half,” said Wayne head coach Brandon Sharp. “We didn’t play well at all in the third quarter. We didn’t tackle well and they big played us. If you take a quarter off like that in a big game you’re going to lose.”

The Bulldogs got their offense off high center on the Mullins to Madden touchdown pass and the score was 28-20, Elmore City, in the fourth quarter.

The two teams traded touchdowns in the fourth quarter and Wayne’s last-chance drive to tie or take the lead ended when the Bulldogs fumbled.

“Elmore had a good game plan and played extremely well,” Sharp said. “We didn’t play well and we didn’t give the effort we usually give. We didn’t play our game.”

Despite the Bulldogs not playing at a high level they were still in the game late in the fourth quarter.

“We have a good team and were driving in the fourth quarter to go tie or cut the lead. We didn’t play well and still had an opportunity to win the game,” Sharp said. “I’m not taking anything away from Elmore because they’re a good team and played well.”

Wayne’s defense broke for the first time all season.

“We’re not used to that,” Sharp said.

Lewelling led the defense with 10 tackles and a sack.

Mullins had nine tackles while both Andy Lee and Maddox Mantooth registered six.

Cody Davis had three tackles and a sack.

Despite the loss, Wayne still has an outside chance to win the District title if they beat Ringling on Friday.

“All of our goals are still right there and attainable,” Sharp said. “We know who we have in front of us (Ringling). They are as advertised and are one of the top teams in the state. They have the best coaching staff we’ll see this season.”

Ringling (8-0) runs a four-man front on defense but will walk up linebackers to give the appearance of a 50 front or even a 6-1 look.

“Their defense is relentless,” Sharp said. “They don’t take plays off and their mike linebacker is the best we’ve faced in a long, long time. He makes a lot of plays.”

Ringling is a senior-dominated team and starts seven seniors on D.

Offensively the Blue Devils give opponents a heavy dose of stretch plays, counter, power and veer.

“They are very physical and the quarterback is talented,” Sharp said. “This will be a good gauge for us as a team. This team will be in the Playoffs in the later rounds and it will be a good test for us.”

Sharp’s nominee for Heart of Oklahoma Defensive Player of the Week was Brannon Lewelling. He had 10 tackles and a sack.

The nominations for Heart of Oklahoma Defensive Lineman of the Week were Maddox Mantooth and Andy Lee.

Kickoff is set for 7 p.m. at Ringling.

Wayne has already qualified for the State Playoffs.