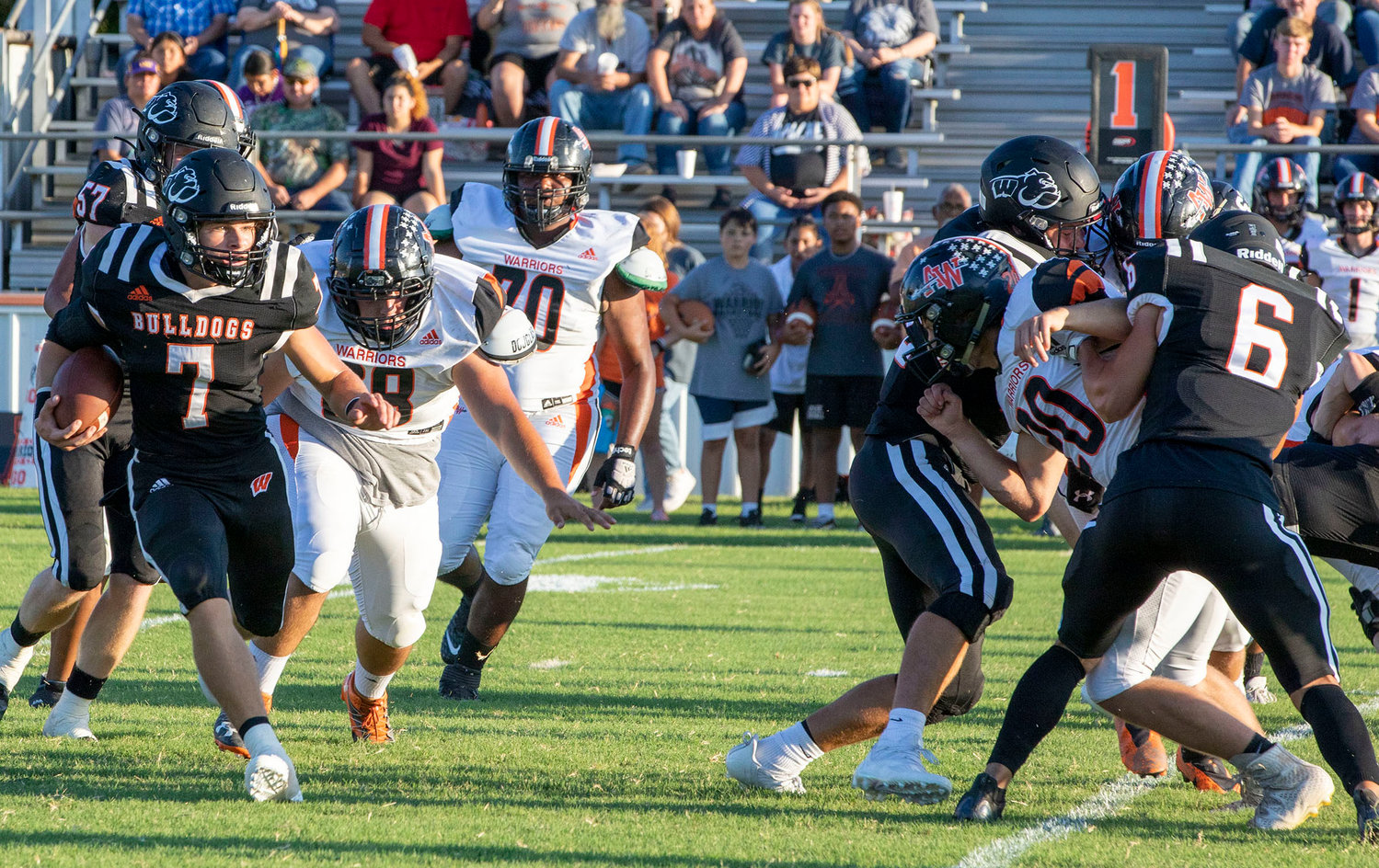 Wayne held Apache to minus 18 yards of rushing Friday on the way to a 37-6 win Friday to open the 2021 season.

The Bulldog front seven controlled the line of scrimmage and made life hard for the Warriors on all 12 rushing attempts.

The only plays Apache found success against the Wayne defense was in the passing game when the Warriors threw the ball into the flat, according to Sharp.

“The flats is where they hit us the hardest and we gave up a few passes there,” he said.

Even with a little success, Wayne held the Warrior offense to 70 total yards.

“Apache is a good team and to do that you’re playing good defense,” Sharp said. “The back end of our defense played decent.”

Apache didn’t score until the fourth quarter after the game was in hand and Wayne had substituted in their reserves.

Brannon Lewelling led the team in tackles with 10 stops.

Ethan Mullins had five tackles and had an interception. Maddox Mantooth had three tackles, a sack and forced a fumble.

Cody Davis had a tackle a sack and recovered the fumble caused by Mantooth.

While the defense was controlling the game the Wayne offense was finding it difficult to establish a rhythm early.

Wayne put the ball on the ground multiple times and were held scoreless in the first quarter.

But things started rolling in the second quarter when senior quarterback Mullins score on a seven yard burst to put Wayne ahead.

The point after attempt was no good off the foot of Kaleb Madden.

Mullins scored again in the second quarter on a 69-yard cross country jaunt.

Wayne made the score 14-0 after Lewelling found Madden for a 3-yard pass on the two point conversion.

Still in the second stanza, Mullins scored a third touchdown on a 29-yard run.

Lewelling pounded in the two point conversion and Wayne was in the driver’s seat heading into the halftime locker room.

“The defense kept playing well the whole game and it helped until the offense got into a groove,” Sharp said.

Mullins found the end zone again in the third quarter but this time on the defensive side of the ball when he returned an interception 100 yards before he hit pay dirt.

His fellow senior Lewelling again made good on the two point conversion.

Madden would finish the Wayne scoring for the night with his 32 yard run in the fourth quarter.

Wayne finished the game with 321 yards rushing as a team on 36 carries.

Mullins was responsible for 200 of those yards and finished with one offensive touchdown in addition to the defensive score.

Lewelling rushed for 72 yards in the game and Madden had 34 yards on two carries and a score.

“I feel like we’re going to get more guys involved this year and spread out the work load,” Sharp said. “The offensive line played okay but we realize there’s work to do.”

The game between the two schools was cancelled last year due to COVID.

Sharp has seen them play and said they’re athletic and improved from last year’s team.

“The running back is good and can run,” he said. “We’ll have to tackle.”

Walters will spread the field on offense and throw the ball around the field before coming back to the running game and running right at the defense.

“If the d-line plays well we’ll have success,” Sharp said. “We have to play well up front.”

On defense the Blue Devils run a 4-4 defense.

“They have an active front and bring pressure,” Sharp said. “We’ll have to stay glued up on the line. If we can do that we think we’ll have success.”

Sharp’s nominee for Heart of Oklahoma Offensive Lineman of the Week was Andy Lee. The big senior graded out at 80%.

His nominee for Heart of Oklahoma Defensive Player of the Week was Brannon Lewelling. Lewelling had 10 tackles.

The nomination for Heart of Oklahoma Defensive Lineman of the Week was Kevin Bynum.