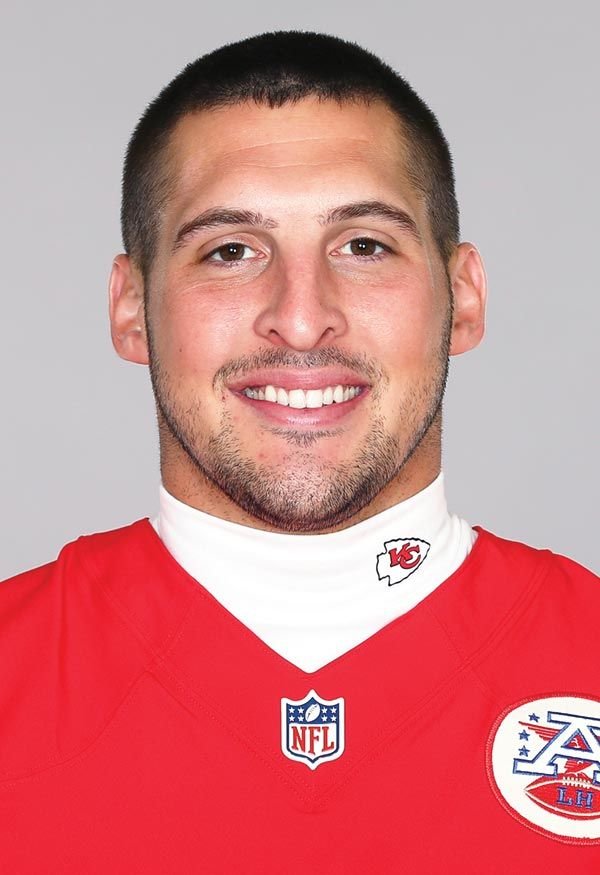 This Sunday while you’re prepping your favorite Superbowl snacks and getting ready for the plethora of commercials, don’t forget to train your eye on one of your own.

James Winchester, donning the famous red and yellow of the Kansas City Chiefs, will be hitting the field to throw the ball in the toughest situations.

He won’t be launching Hail Marys, or threading the needle, instead he will be taking the field to zip the ball backwards while his head is upside down.

Winchester is the starting long snapper for the Chiefs and is playing in his first Super Bowl Sunday.

He is looking to do his part to bring home one of the most famous championships in the world.

If you don’t know who he is, he is perfectly okay with it.

“The thing with my job is that some people know I’m up here, but you don’t get a lot of  attention being a long snapper,” the rangy Winchester said.

“It’s more of a service role,” he continued. “And if people don’t know my name that probably means I’m doing a pretty good job.

“You don’t become a long snapper to become famous, I’ll tell you that and I’m totally fine with it.”

According to his former high school coach, Dennis McCray, this championship has been waiting for Winchester.

“McCray texted me the other night. He told me he was proud of me and that the third time’s the charm,” Winchester noted.

Winchester and the Washington Warriors were runners up in the Class A Football State Championship.

In 2008, Winchester and the Sooners fell short in the National Championship Game of the BCS.

He also has runner up finishes in basketball and track.

In 2020, he and the Chiefs look to bring home the most coveted trophy in America.

If Winchester’s work ethic has anything to do with it it’s not a long shot for the long snapper.

Winchester, a 2008 grad of Washington High School, walked on to play for the Oklahoma Sooners the same year, despite not being recruited and not having a scholarship.

“I had offers to other schools, smaller schools, but wearing Sooners on my chest and OU on my helmet was a dream of mine.

“I wanted to wear the crimson and cream. I wanted to play at OU,” he confirmed.

He thought he’d get his shot as a wide receiver, but his Dad’s insistence he keep his skills up flying the ball in reverse paid off.

His Dad, Mike, was a Sooner himself handling the punting chores for the Sooners from 1984-86.

Mike, a Marietta native, was murdered walking out of work at Will Rogers World Airport in November of 2016.

But rearing James and his siblings, Mike instilled a work ethic like no other.

“When you’re from a small school, you’re doing anything and everything you can to make the team,” Winchester said.

In high school Winchester’s main role was punter, but he quickly realized his skills were better served in other areas.

The Sooner long snapper at the time tore his Achilles Tendon that season and Winchester stepped in to fill the gap until his return.

Winchester started the first three games that season. He backed up the starter the rest of the season and then started his sophomore, junior, and senior years as the Sooners’ long snapper.

Winchester graduated with a bachelors degree in 2012 and began looking for a spot on a pro team.

Again, he wasn’t drafted, and not many people knew who he was. But he put in his time, flew out and worked out with the Philadelphia Eagles, but didn’t make it past a couple of pre-season games.

He also put out his best for the Colts and the Browns, but nobody was handing him the golden pen.

“After graduating from OU, I worked as a land man around Blanchard and Washington. It gave me a chance to work out and to get better.

“After I saw the size and skill of pro-players, I knew I had to work out more. I had to get better,” Winchester admitted.

His hard work and dedication paid off.

In his spare time, if he had any, he would stop by small rural schools and get some reps in on the field and the weight room. While at home he would sling footballs into a batting net in his backyard.

“I’d get an hour or two in the field houses of schools like Davis,” Winchester said.

In 2015, just weeks before getting married, Winchester contemplated shelving his cleats. But a combine in Phoenix changed things

A retired special teams coach, called Winchester and said he hadn’t seen his name on the roster.

Winchester heard the call and said he’d be there.

That was the one. Several teams showed interest but ultimately he chose Kansas City as the team he felt he had the best shot with making the 53 man roster when the season began.

Winchester notes that hard work has gotten him where he is, to some extent. His love for the game has played a major role, but he never ceases to let anyone know that it is God and his faith that is truly instrumental in his success.

“By the grace of God I’m a long snapper in the NFL. I’ll take it,” Winchester said.

“Long snapping is a service role for a team. That’s what you do, you serve, that’s what our faith tells us to do. Why not integrate my faith? Why not serve and be content with that?

“This is a game I love. It’s a game that allows me to provide for my family.”

It’s the love of the game and God that led Winchester to walk on to OU and to keep getting better and better until he landed in the pros.

“You’re never going to be as successful as you can be unless you love it.”

He notes that less than one percent of college players make the pros.

“I just knew I had to work hard for what I wanted. I was okay with that. The way I was raised you worked for what you wanted. The way I saw it I had everything to gain and nothing to lose.”

“I knew I didn’t want to get to 30 years old and think back and go ‘I think I could’ve done it but never did’.”

And for those high schoolers who want to follow in Winchester’s steps into the pros his advice is to work hard and stay focused on your goals.

From grades, to work ethic, to having a love for what you do.

“It starts with your grades. You can’t play if you don’t take care of your education first. That’s a huge part of it.

“At the same time if you have a goal and dream, chase it, there is no guarantee that it comes through, but chase it.”

He notes to stay grounded and realistic but to also never stop chasing your goals.

“We live in an incredible time and country that we can do all kinds of things with the freedoms we are afforded.

“If you have something you want, go after it,” he encourages.

Even today Winchester continues to put in the extra effort.

“I never get to the point where I feel I’m good enough. I’m always working to get better and to perfect my craft, to be a better long snapper.

“I’m always working. There is always somebody that wants your job in the NFL. It drives you to get better every day.”

He also said that many of the students in rural Oklahoma know what hard work is already, and all they need to do is apply it to a sport and chase their dream.

But more importantly, don’t be afraid to fail.

“You do that and I don’t think you can go wrong,” the still grounded former Washington Warrior concluded.

Winchester and his wife, Emily, just had their second child last week.

The long snapper for the San Francisco 49ers has Oklahoma connections as well.

Kyle Nelson was born in Norman and his mother, Lori, was one year ahead of Purcell’s Todd Clouse at Atoka High School where she was a track athlete, cheerleader and homecoming queen.