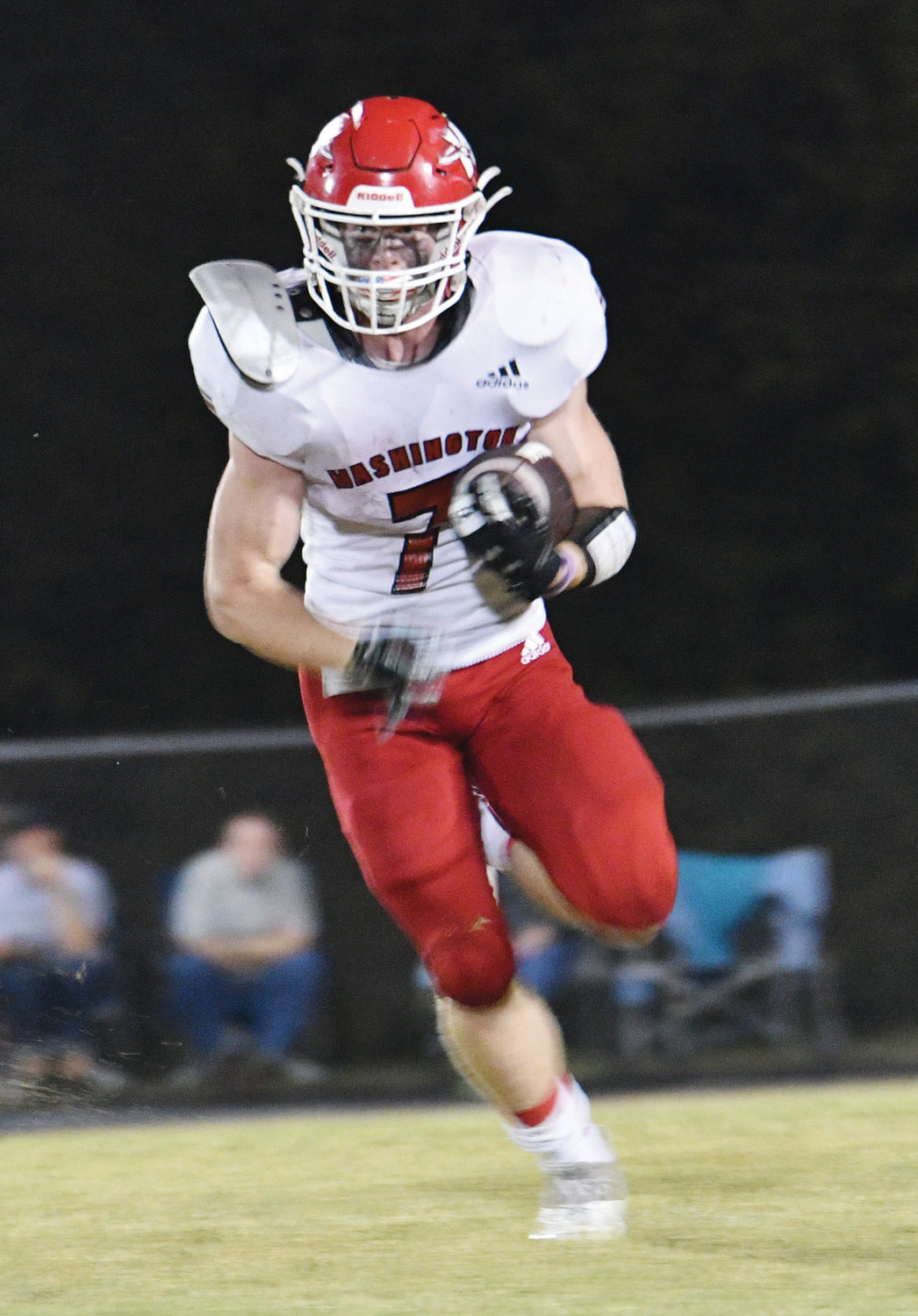 Washington junior Cole Scott totes the mail during the Warriors’ 56-18 win over Bethel Friday. Scott rushed the football 24 times for 217 yards and scored on runs of 11 and 37.
Ron Ladlee 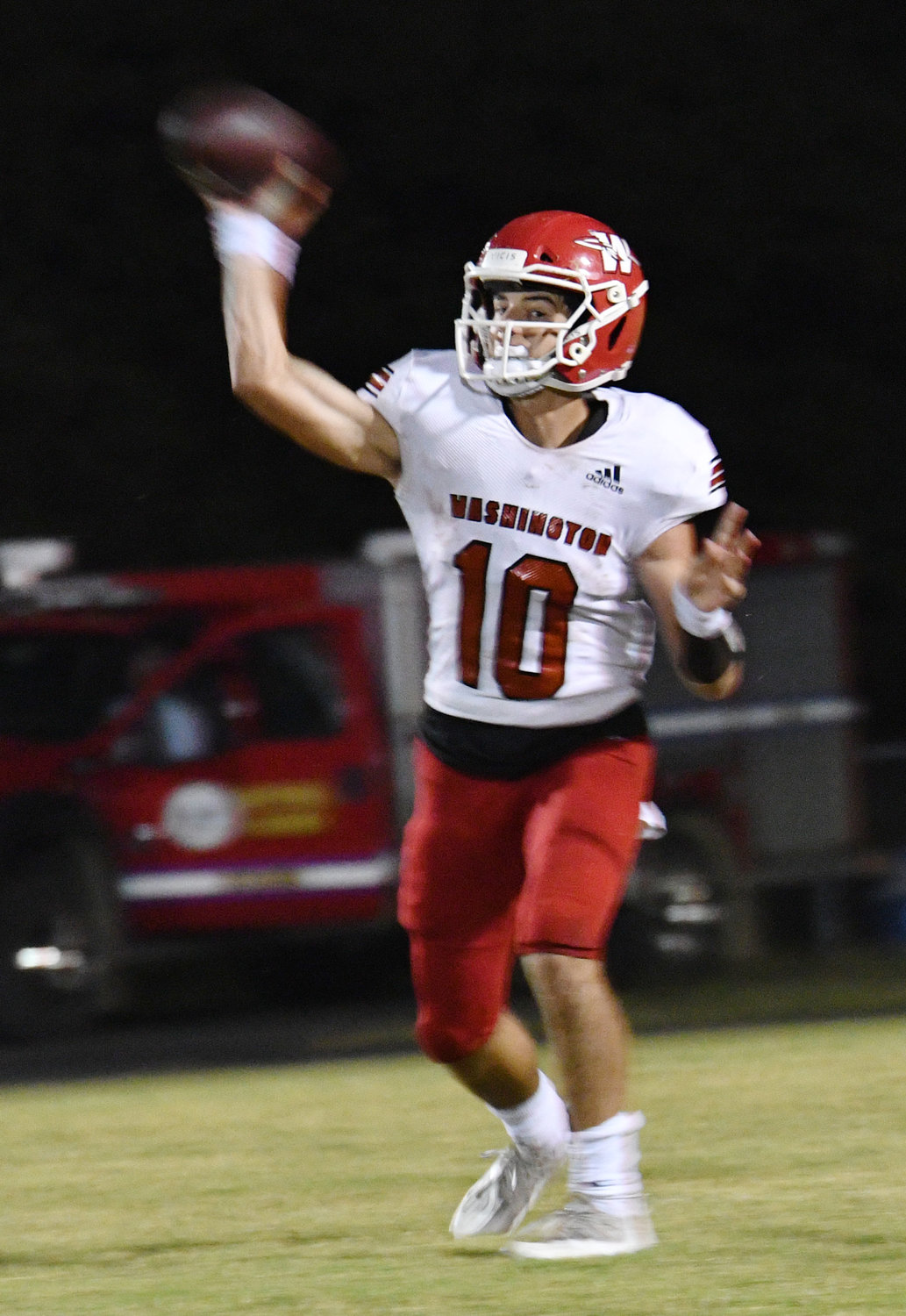 A balanced offensive attack paved the way for Washington to pin a 56-18 beat down on the Bethel Wildcats last Friday night.

Cole Scott, who rushed the football 24 times for 217 yards, scored on runs of 11 and 37 and quarterback Major Cantrell threw four touchdown passes.

Washington finished the night with nearly 500 yards of offense grinding out 200 on the ground and throwing for another 291.

The Warriors forged a 21-6 lead after the end of the first period and built it to 35-12 at intermission. They out-scored the Wildcats 21-6 in the second half.

Cantrell opened the scoring with a 53-yard scoring strike to Cage Morris. Later in the first quarter the sophomore signal caller found Luke Hendrix open for a 48 yard touchdown. Scott legged it in from 11 yards out to close out the Warriors’ first quarter scoring.

In the second quarter, Jacob Jones scooped up a fumble on a punt return and scored from 20 yards out. Lane Steele followed that score with a six yard touchdown jaunt. Scott bolted 37 yards for another rushing touchdown followed by a 37 yard pass from Cantrell to Kobe Scott. Cantrell’s seven yard strike to Steele closed out the Washington scoring in the fourth quarter.

Layne Spaulding led the team in tackles with 15. Keller Howard registered seven tackles and Hayden Milner made six stops including two for a loss and had a quarterback sack.

Safety Jaxon Hendrix picked off an errant Wildcat pass that came at a crucial time during their second possession.

“That was a timely pick that swung momentum our way,” head coach Brad Beller said. “They couldn’t run and after the interception they struggled with their passing game the rest of the night.

The Warriors were led defensively by their defensive line including Hayden Milner, Rope Scott and Caleb Bruce.

“That’s the unit we’ve been waiting to play really, really well,” Beller said. “Bethel is big and strong and those three catapulted our defense. They did a great job.

“Overall, it was a very solid performance by our defense. We have to figure out how not to give up a touchdown on the opponent’s first possession, something we’ve done four out of the five weeks. We need to come out swinging and not soft,” the coach said.

The Warriors added a new wrinkle to their offensive playbook using some option, something they hadn’t shown before.

“We knew we’d be able to throw on them but we needed to run the ball effectively and Cole Scott and our offensive line got the job done,” Beller said.

Paving the way for Scott was the blocking of Jordan Vanya, Tanner Winlock, Easton Berglan, Wyatt McCauley and Naithen Spaulding.

“Staying balanced was the difference in the game,” Beller said. “I think we caught them off guard with the option game.”

It’ll be Little League appreciation night and the 1971 Warrior football team will be honored as well. They were the first high school football team for Washington, Beller reported.

The Royals operate out of the spread formation on offense and utilize a 3-4 scheme defensively.

“We’ll have to be able to pick up their blitzes because they bring so much pressure,” Beller said the key for a victory. “We’ll have to make sure we are mentally in tune with their alignments and what our roles are.”

Beller said following their blocking assignments will be crucial.

“We’ll have to be very fundamentally sound and be knowledgeable about our roles. On defense we will have to keep their quarterback in check. He is their spark plug and has a cannon for an arm. He does a great job of getting the ball down field to their receivers,” Beller said.

Washington Head Coach Brad Beller nominated Hayden Milner as the Defensive Lineman of the Week. Milner had six tackles including one for a loss and had one quarterback sack last Friday night.

Beller nominated Layne Spaulding as the Defensive Player of the Week for his 15 tackle performance against Bethel.

Tanner Winlock was nominated as the Offensive Lineman of the Week, grading out at 87.2 percent.

Beller nominated Cole Scott as the Offensive Player of the Week. Scott rushed the ball 24 times for 217 yards and two touchdowns.