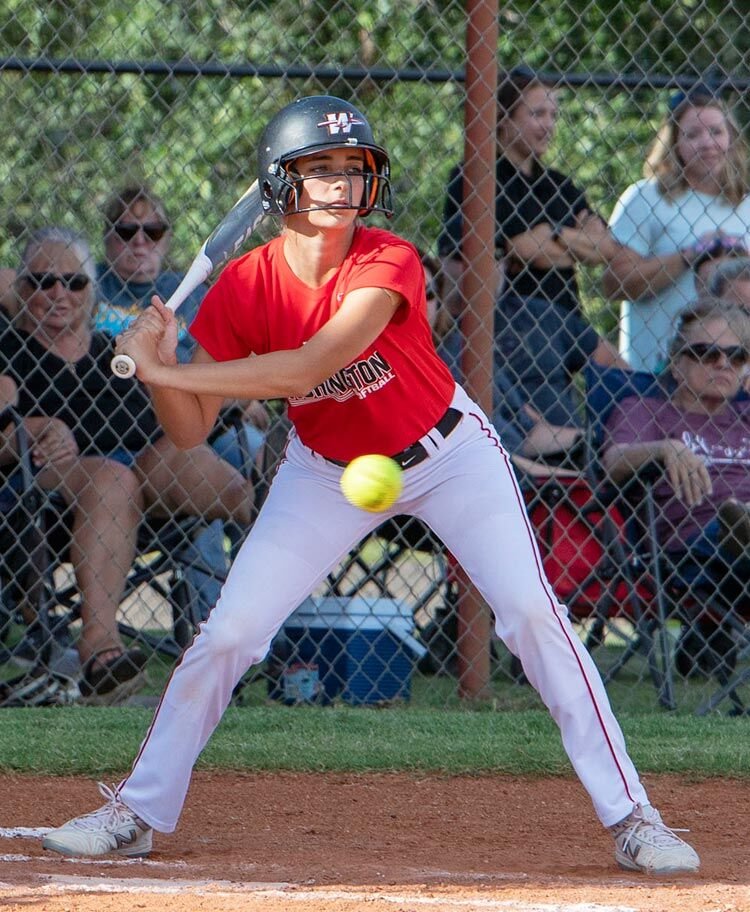 Kinzie Schultz takes a pitch during an at bat. The Washington Warriors are 17-1 this season and play in the Silo tournament beginning today (Thursday).

The Washington Warriors remain on fire as they picked up four additional wins in the past week.

They defeated Westmoore (6A) 8-6 last Tuesday.

She was credited with three earned runs.

Emma Curry was 3-4 with three doubles. She knocked in three runs while she was at it.

Richardson and Kilmer both had doubles.

Washington next picked up a District win over Jones, beating them 27-7.

It was a Warrior tsunami at the plate with 18 hits scattered over five innings.

Katelyn Hicks went the distance in the circle and had seven strikeouts.

Ellie Loveless and Elly Allison both homered in the win.

Washington picked up another District win when they knocked off Heritage Hall in an 11-1 victory.

Kaydence Andrews and Curry both homered.

Washington finished the week with a 15-2 win over Millwood in another District contest.

Curry had a three RBI day and Kinzie Schultz and Allison each accounted for two ribbies.

Washington scored eight runs in the first inning and seven in the second inning to make for a quick outing in 3 1/2 innings against the Falcons.

Hicks and Emjay Lucas combined for the win from the circle with Hicks getting the start and Lucas in as relief.

The pair only allowed two hits and one earned run.