They take their show on the road to Owasso Friday night 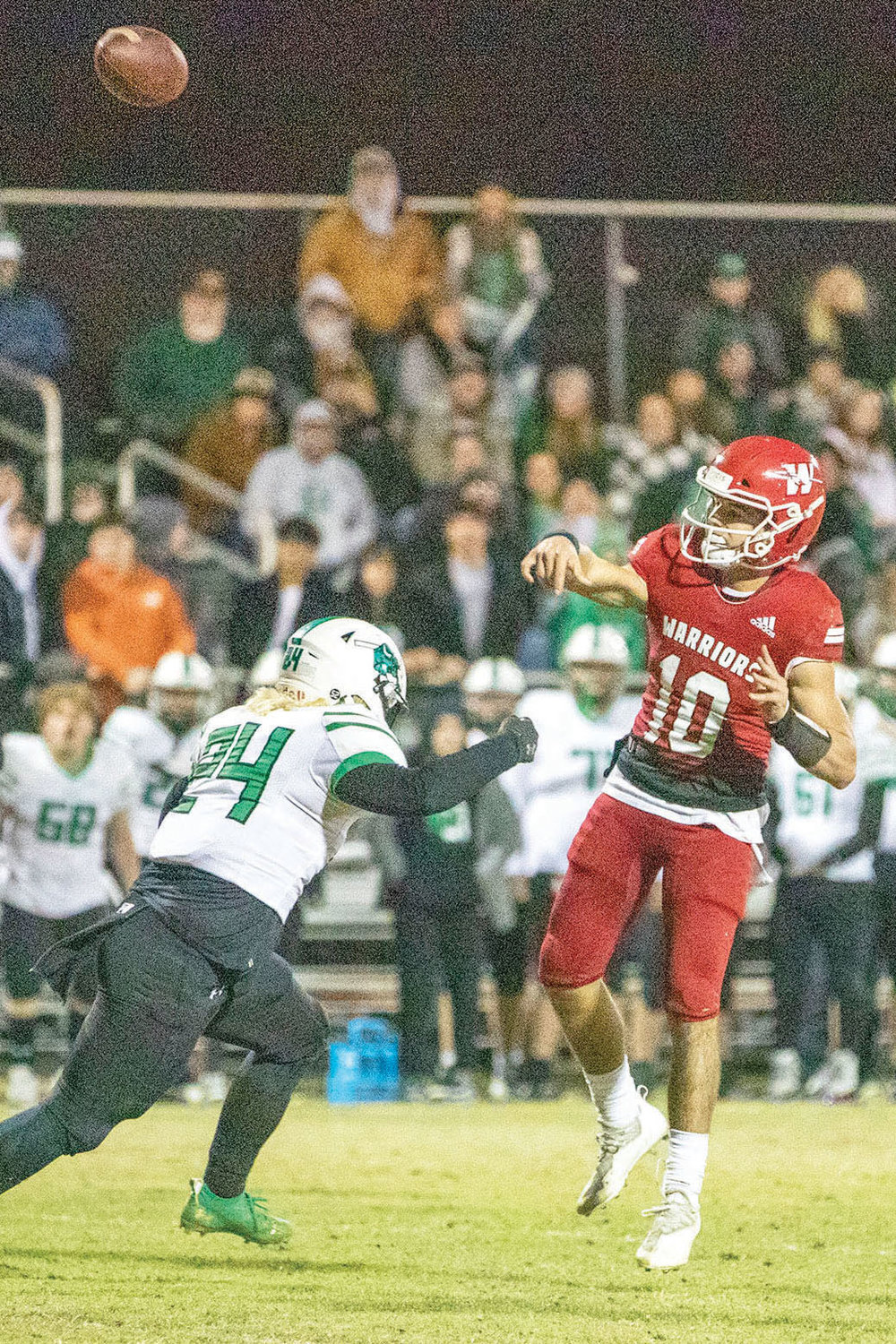 Washington sophomore Major Cantrell throws a ball over the middle during the Warriors’ 52-21 win over Jones Friday night. Washington travels to Owasso to face Rejoice Christian in the quarterfinals of the State playoffs this Friday.
Greg Gaston - double g images 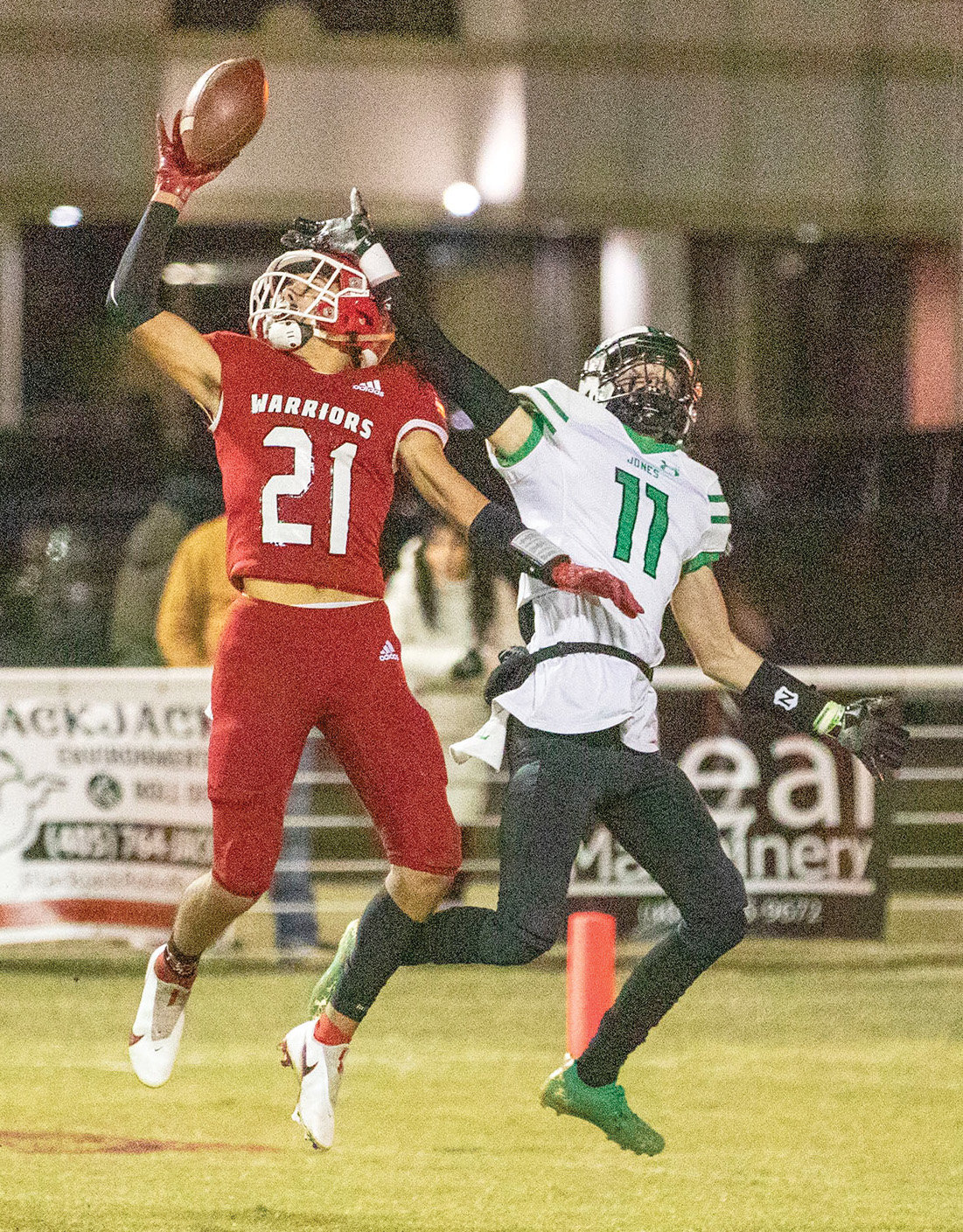 Washington senior Lane Steele defends a pass and tips the ball during the Warriors’ 52-21 win over Jones. Washington travels to Owasso to face Rejoice Christian in the quarterfinals of the State playoffs this Friday.
Greg Gaston - double g images 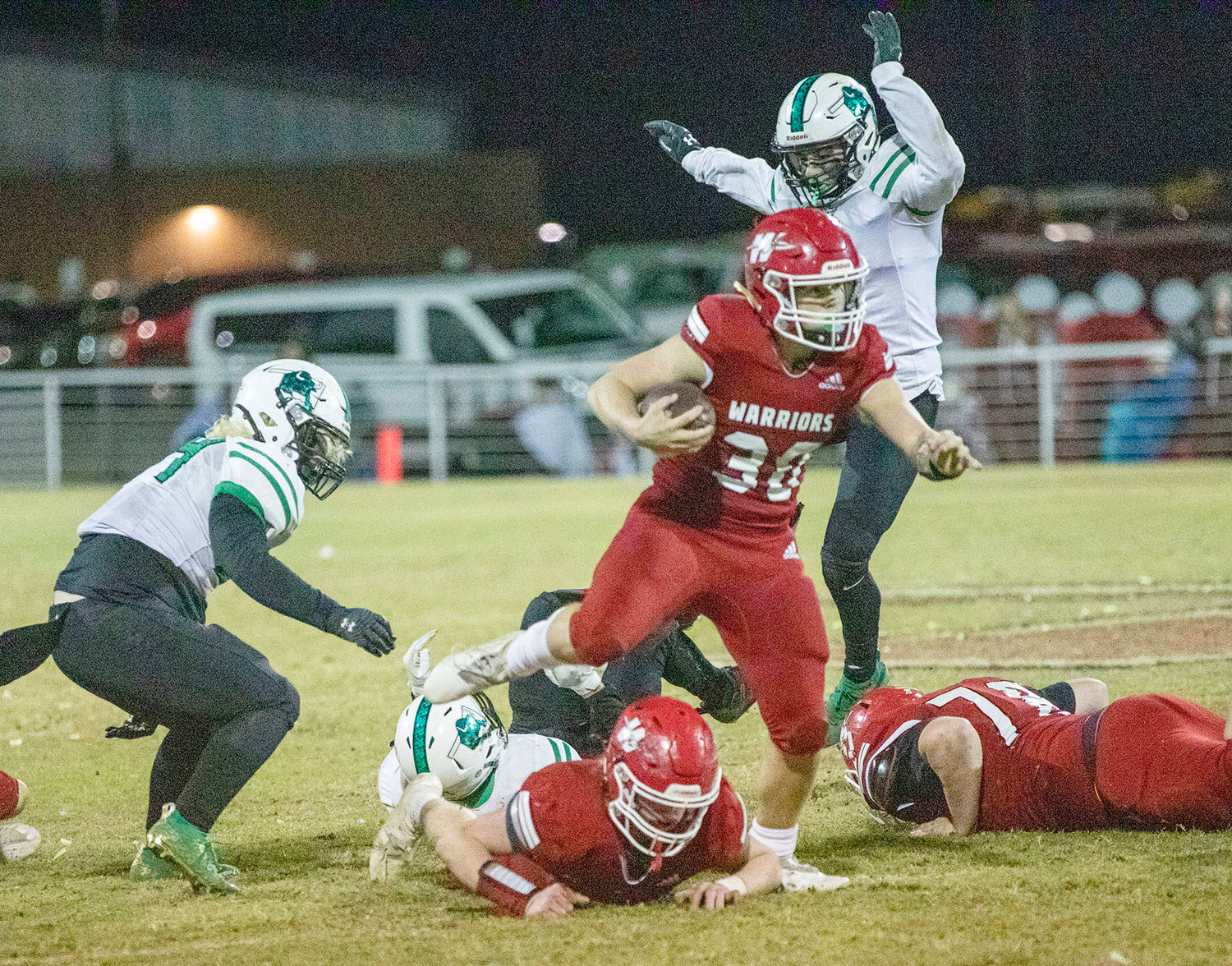 Washington sophomore Kade Norman rumbles over the line of scrimmage during the Warriors’ 52-21 win over Jones Friday night. Washington travels to Owasso to face Rejoice Christian in the quarterfinals of the State playoffs this Friday. Norman scored four touchdowns in the game.
Greg Gaston - double g images
Previous Next
Posted Wednesday, November 24, 2021 9:00 am
John D. Montgomery

No. 1 Washington attacked a very talented Jones Longhorn team on both sides of the ball and neatly tucked away a 52-21 victory at Reed Field last Friday night.

“It was the most complete game we’ve played all year both offensively and defensively,” head coach Brad Beller said.

“With as much fire power as they have we defended well against the pass with the exception of two busted coverages,” Beller said.

And it wasn’t just in the back end where the Warriors roamed.

They had seven quarterback sacks and 17 hurries on the night keeping the pressure on Jones’ Iowa Hawkeye quarterback commit off balance.

“We were able to pressure him all night, sometimes before he got going and some were coverage sacks. I was very pleased with how our defense played.

“We forced them to throw,” Beller said.

The Longhorns completed 20 of 40 pass attempts for 216 yards.

“When you get this late in the year playing a team as talented as they are they are going to have some success. But all 11 of our guys did their jobs. They did great jobs,” Beller praised.

“Our two defensive ends Hayden Milner and Rhett Vaughn played outstanding and our linebackers at the second level, Layne Spaulding played well. Our two outside linebackers Ben Vaughn and Cage Morris did a great job of getting the underneath coverage yet still defending the run. That’s a tough task.”

Beller said Reese Stephens has become the captain of the secondary. He along with Jamison Holland and three players that rotated at corner Holland, Lane Steele and Kobe Scott all played top notch defense.

“They did not give up one deep ball on the outside where Jones has had their success over the years. We were able to take away what they do best and force them into doing other things. That was the story of the game,” Beller said.

On the flip side, Washington amassed 475 yards against what Beller described as “a pretty good defense.”

Cole Scott carried the mail 35 times for the Warriors and gained 282 yards including three touchdowns.

Major Cantrell was 7-10 passing for 121 yards. He found Luke Hendrix open in the first quarter for a 26 yard scoring play.

Up next for the 12-0 Warriors will be a road trip to Owasso where they will square off Friday against the Rejoice Christian Eagles.

The Eagles are 11-1 and are a high scoring machine offensively.

They run the spread option on offense and have a quarterback and two wide receivers that Beller brands as “dynamic”.

The Eagles have scored 60 points or more in five of their 12 games and have only been held under 45 once and that was in Week 0.

“Their offense is as potent as an offense that we’ve seen this year,” the Warrior skipper said.

Beller reports their defense is pressure packed with some four man fronts and some five man fronts.

“They will use man coverage and bring a lot of pressure,” he said. “They try to force you to run and then have to throw over the top.

“The key is that we’ve got to tackle well in space and be patient on offense. We’ve just got to take what they give us because of all the pressure they bring. They try to rattle you,” Beller confirmed.