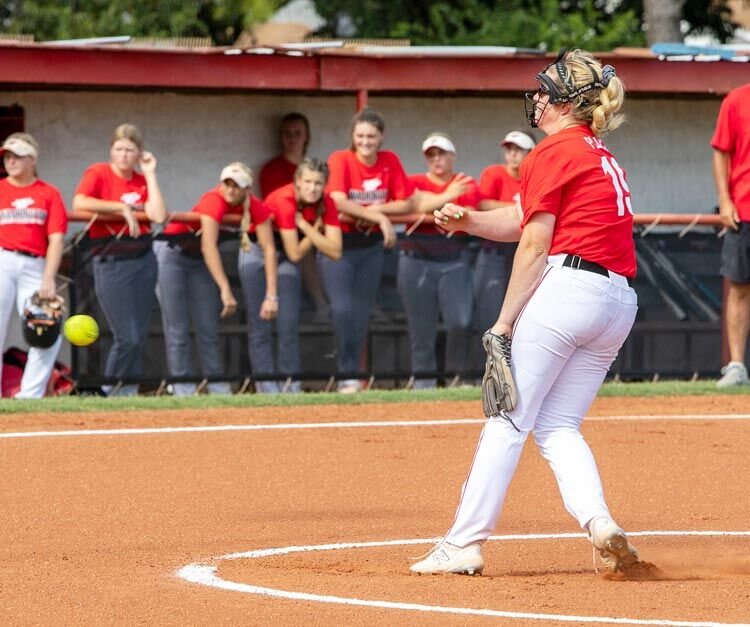 Maggie Place has been on fire from the circle this season and sports a .677 earned run average while in the circle for the Warriors. She’s allowed five runs in 41.1 innings pitched.

After defeating Jones (10-0) and Meeker (10-1) last week the Washington Warriors have run into a wall against Mother Nature.

District games against Jones, Millwood, Heritage Hall (which would have been senior night) and Chandler have all been rained out.

“I’ve never seen anything like it,” said Washington Head Coach Jace Brewer. “We were trying to think if we’ve ever had back-to-back rainouts in the fall.”

After Tuesday’s District game against Chandler was postponed, Brewer and company decided to move their September 28 game against Westmoore to Tuesday instead and play the game on UCO’s turf field.

“We’re going to have to get creative on how we get these District games in,” he said. “So we moved Westmoore to tonight (Tuesday) to give us an opening.”

In the Meeker game, sophomore pitcher Maggie Place had command of the circle.

“She threw it well,” Brewer said. “We gave up one earned run.”

Place indeed gave up one earned run, her first since August 18 against Dale and only her fourth this season.

Washington led 4-1 until the fifth inning when they scored four runs. They tacked on two more in the sixth.

“After we scored the six we broke it open,” Brewer said.

Place helped her own cause at the plate when she scored two runs herself and drove in two more.

Tinley Lucas also had a good night at the dish and scored two runs while going 2-4 with a triple.

In fact, the Warriors made it a habit of taking extra bases with a gaggle of players getting doubles, including Mikinzy Bost, Ellie Loveless, Emma Curry, Kaile Kilmer and Place.