Take to road for first time this season Friday at Lindsay 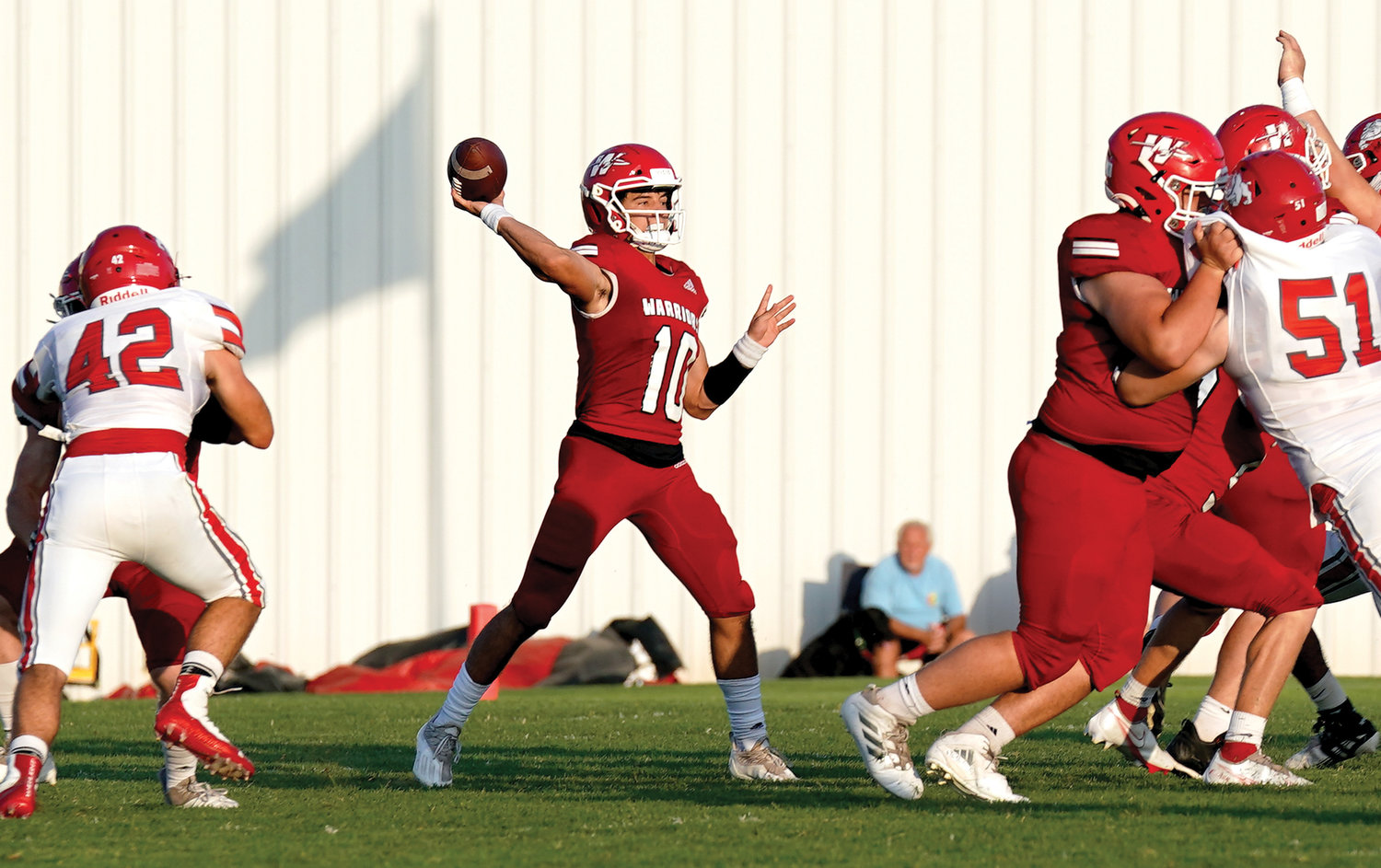 With plenty of protection, sophomore Washington quarterback Major Cantrell (10) stands in the pocket to make the pass to senior receiver Luke Hendrix (2) for a first down during play against Sulphur at Reed Field on Friday. Washington beat Sulphur 34-13.
Matthew Gaston 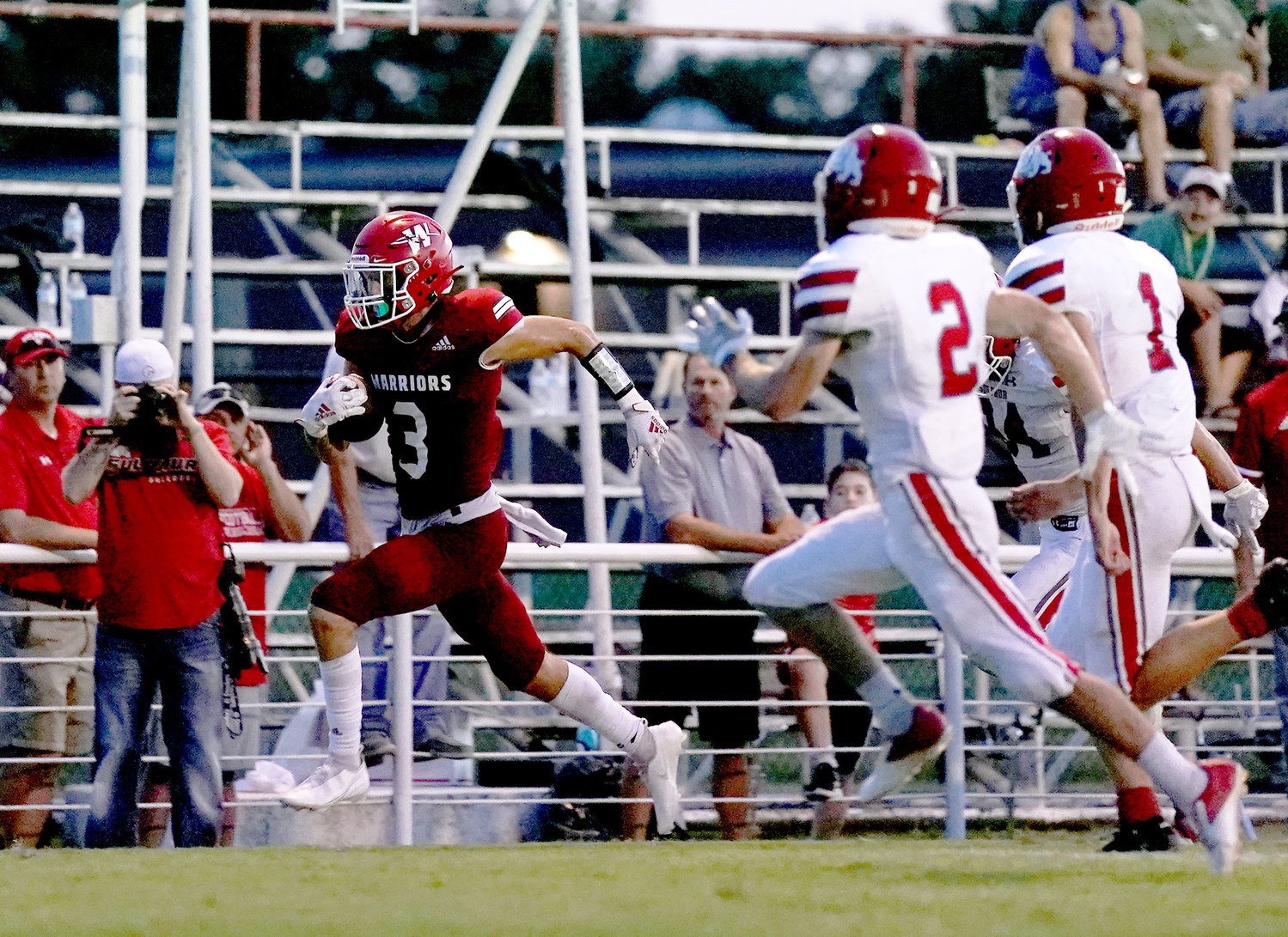 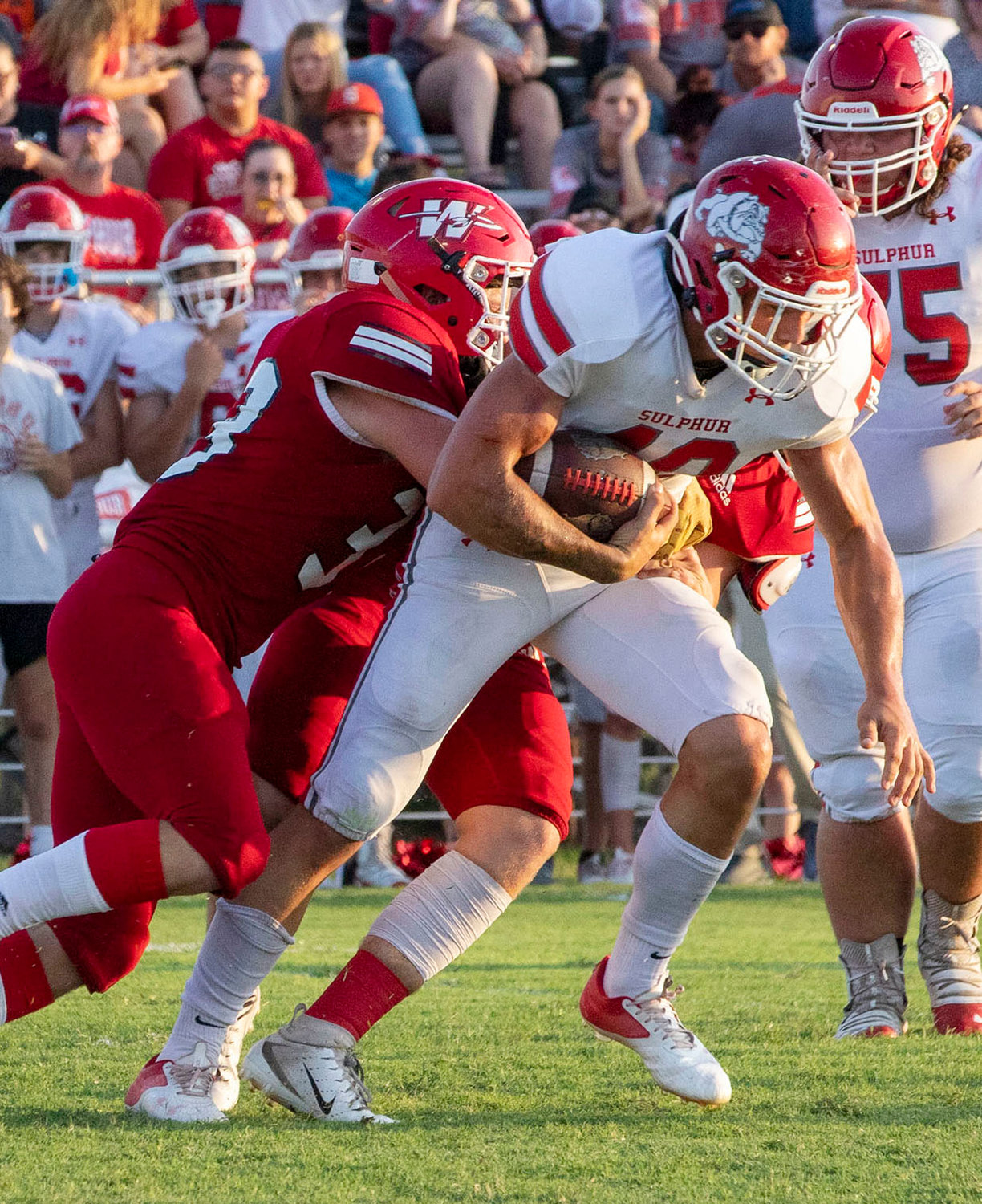 Cantrell finished the night completing 11 of his 18 passing attempts for 258 yards and three touchdowns.

Head coach Brad Beller said the key to the offensive production was Washington’s ability to rush the football creating some one on one coverages on the outside.

“We didn’t know if we would be able to run the ball effectively but since we did it allowed us to be balanced with our run and pass and it kept them off balance.”

Cantrell hooked up with Kobe Scott for a nine yard touchdown aerial in the first quarter.

After Washington took the 7-0 lead, Sulphur came back with a four yard touchdown run near the end of the first period and launched a 91 yard scoring run on their first possession of the second quarter.

But the Warriors had the answer and a big part of that was the offensive line play of sophomore Tanner Winlock.

“For a sophomore against a great team like Sulphur I thought Tanner Winlock did a good job,” Beller said.

Cantrell launched touchdown passes to Luke Hendrix to the turn of 45 and 65 yards. That with a four yard Cole Scott scoring run put Washington up a commanding 27-7 going into the halftime locker room.

Scott put an exclamation point on the scoring notching a 61 yard touchdown run in the third quarter to close out the scoring.

“I’m very proud of Major Cantrell,” Beller said of his sophomore signal caller. “He did that against a team that brings a lot of pressure and plays with physicality. He showed a lot of trust in his offensive line.”

“We controlled the line of scrimmage after that all game long,” the coach said.

“We’ve given up 216 yards early mainly making mental mistakes and misalignments. The other 98 plays we’ve only given up a total of 260 yards,” he said. “That’s something we’ve got to get corrected.”

“He had another amazing night making 17 tackles including four for losses,” Beller said. “And 14 of the 17 tackles were solo.”

He also recovered a fumble.

Younger brother Nathan Spaulding ended the night with seven stops including two for loss in the defensive line.

Jameson Holland turned pigskin thief against the Bulldogs picking off not one but two Sulphur passes.

Up next for the Warriors will be their first road game of the season. They play at Lindsay Friday night at 7:30 p.m.

Lindsay comes into the game 1-1 after whipping Pauls Valley in the opener but losing to Purcell last week.

“In their season opener against Pauls Valley they looked much improved over last year. But in the second game, a rivalry game, Lindsay people would say they had some missed opportunities,” Beller noted.

“They have a really good junior class with a lot of really good athletes. They are improved up front and are always very physical on both sides of the ball. Coach Inman does a great job of  improving week to week. I’m sure they will clean some things up and be ready to go.

“We’ve got to limit our turnovers and be able to stop the run with fewer guys in the box,” Beller said.

Beller nominated Layne Spaulding as the Defensive Player of the Week. Spaulding turned in 17 tackles against Sulphur and recovered a fumble. Four of his tackles were for losses.

Getting the nod as the Offensive Lineman of the Week was Tanner Winlock, who graded out at 93 percent against Sulphur last week.

Beller nominated Nathan Spaulding as the Defensive Lineman of the Week for his seven tackle performance against the Bulldogs. Two of his stops were for losses.