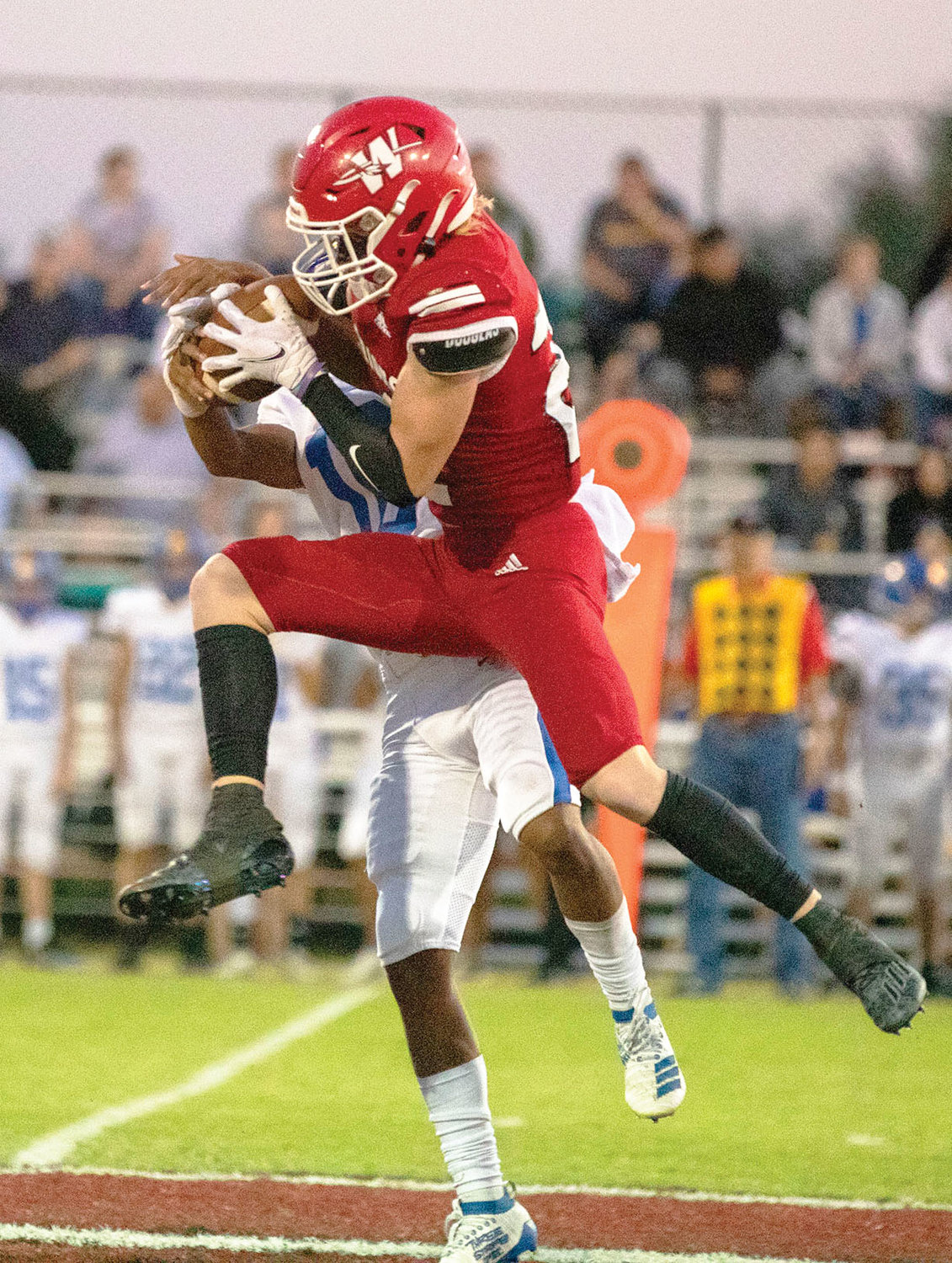 Washington senior Reese Stephens picks off a Holdenville pass during the Warriors’ 69-0 win over the Wolverines. The interception was one of eight on the night.
Greg Gaston - double g images 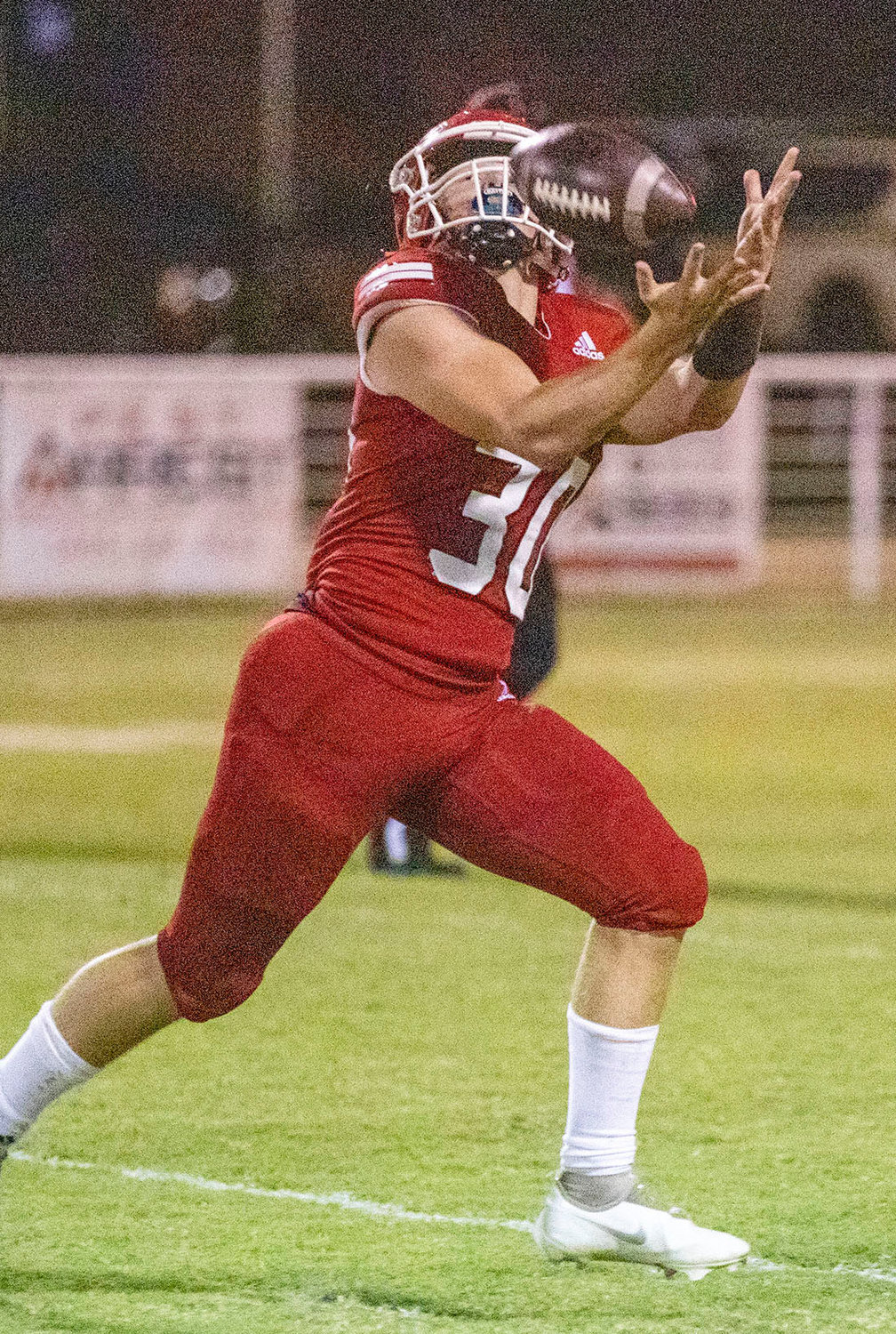 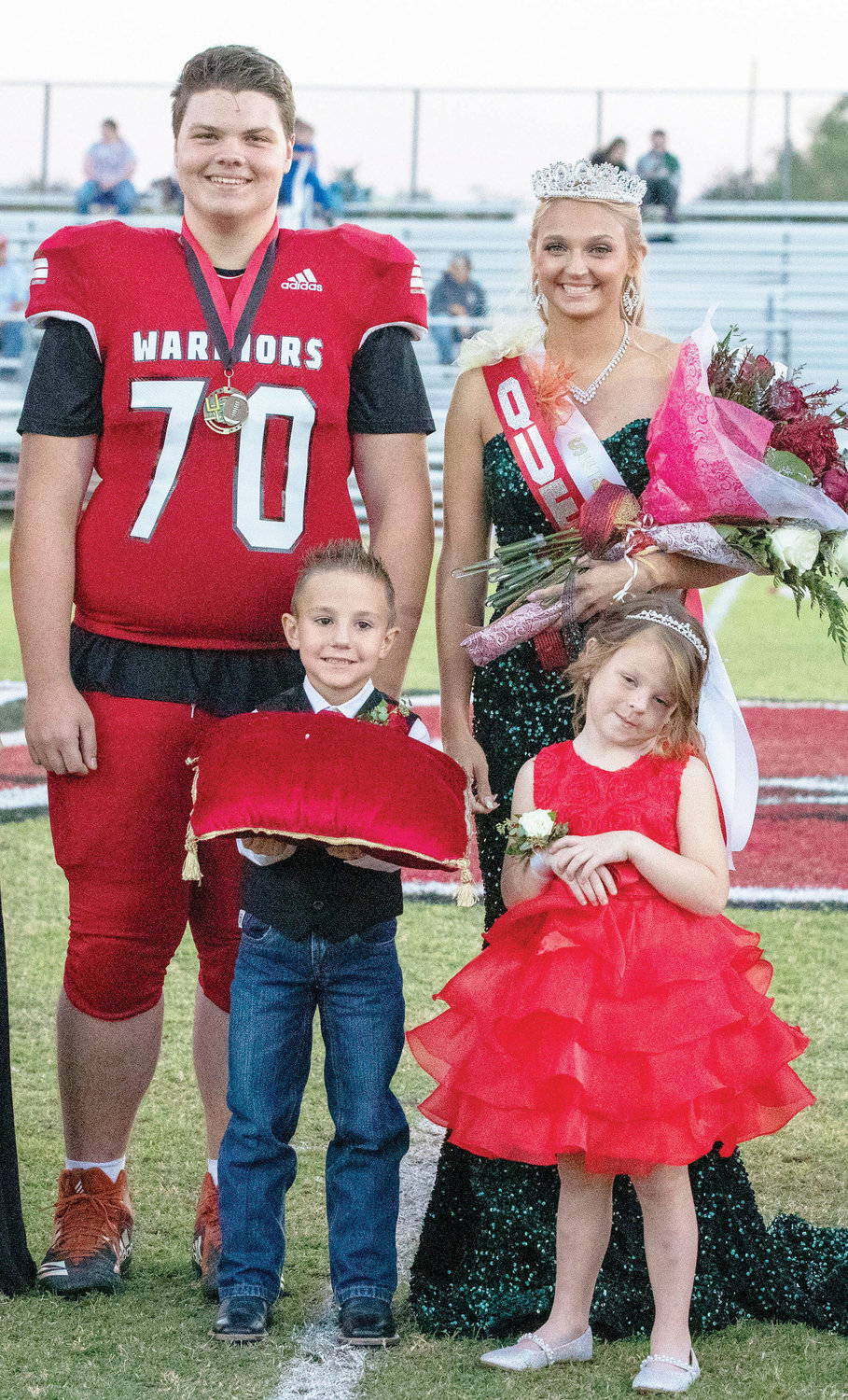 I was very pleased with our first, second and third team defensive play. They did a great job of shutting down the run.”
Brad Beller, Washington head football coach
John D. Montgomery

If Holdenville would have been Cinderella last Friday night they would have turned into a pumpkin before the first quarter was in the books.

Washington’s first two plays from scrimmage were both touchdowns and by the time four minutes had elapsed on the clock the Warriors had found the end zone five times.

Holdenville turned the ball over on their ensuing first play from scrimmage setting the Warriors up at the Wolverine two yard line.

Cole Scott took advantage and crashed into the end zone.

That set the table for Cantrell to toss a 63 yard scoring bomb to Hayden Milner.

Then the Vaughn brothers went to work.

Ben returned an interception 12 yards for a touchdown followed by Rhett returning his interception 25 yards to pay dirt.

There was still eight minutes remaining in the opening quarter.

Cantrell hit senior Reese Stephens for a 13 yard touchdown to close out the 49 point opening quarter. That followed an 83 yard cross-country scoring jaunt by Scott.

Hudson Howard closed out the scoring in the third period on a one yard run.

Beller praised his defenders who came up with nine Wolverine turnovers including interceptions by eight different Warriors.

“One thing I saw that I was very pleased with was the older guys pulling for and rooting for the younger guys,” Beller said. “They know how hard the younger guys work during the week but never get to see the results of their hard work.”

The first team Washington offense only ran six plays in the game as a unit with the Warriors coaching staff not even going through their eight play script.

“It was one of the craziest games as far as getting out of hand as fast as I’ve seen,” Beller said.

“I was very pleased with our first, second and third team defensive play,” the coach said. “They did a great job of shutting down the run.”

The Wolverines rushed the ball 14 times for negative 15 yards.

“I was proud of all the guys from top to bottom,” Beller said.

Holdenville was 7-31 passing for 157 yards. Fifty-two of those yards came on one play.

Washington’s leading tackler was freshman inside linebacker Hudson Howard with eight stops. Another freshman, Tatum Wilk, who finished with six stops from his cornerback position.

Up next for the No. 2 ranked Warriors is a road trip to Crooked Oak. Kick off for the contest is set for 7 p.m.

The Ruf-Nex are 1-7 and have a variety of offensive formations and sets.

“They’ll run anything from a Wing T to a spread on offense,” Beller said. “They have a really good receiver they try to get the ball to and their quarterback is good.”

The Ruf-Nex actually led CHA 13-0 in the first quarter before they started turning the ball over and lost 48-13.

“They have a bend but don’t break type of defense,” Beller noted. “They try to get behind their defensive line and get a rush.”

Washington Head Coach Brad Beller nominated Hudson Howard as the Defensive Player of the Week for his eight tackle performance against Holdenville. One of his tackles was for a loss.

Nominated as the Defensive Lineman of the Week was Jordan Kilmer, who had four tackles.

The nominee for Offensive Player of the Week was Major Cantrell, who was 3-5 passing for 115 yards and three touchdowns.

Getting the nod as the Offensive Lineman of the Week was Baylor Haynes, who graded out at 78 percent against the Wolverines.