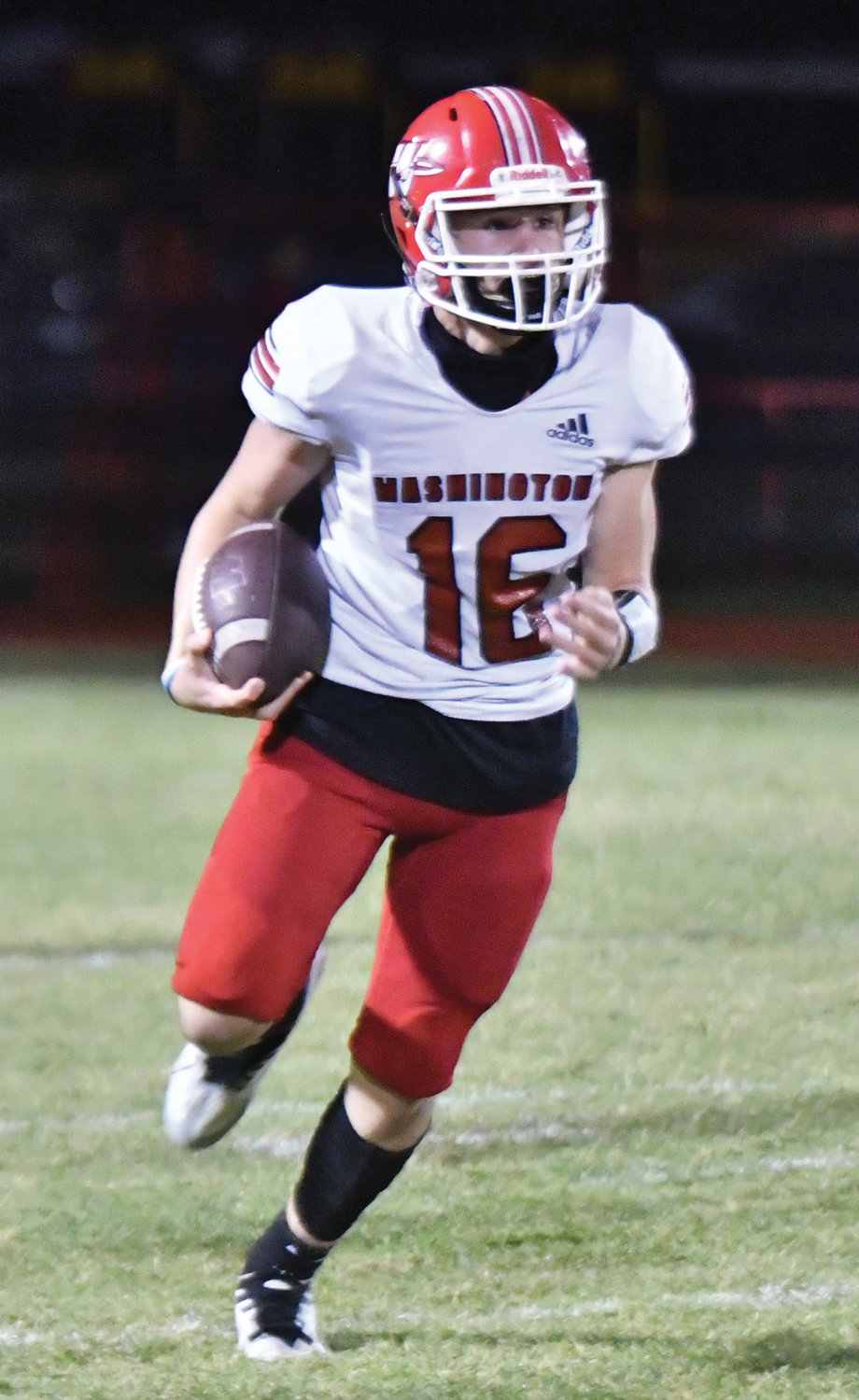 Washington freshman Kale Brakefield runs on a carry during the Warriors’ 55-6 win over Comanche last Friday. Washington squares off against Little Axe tonight (Thursday) after the homecoming coronation.
Ron Ladlee 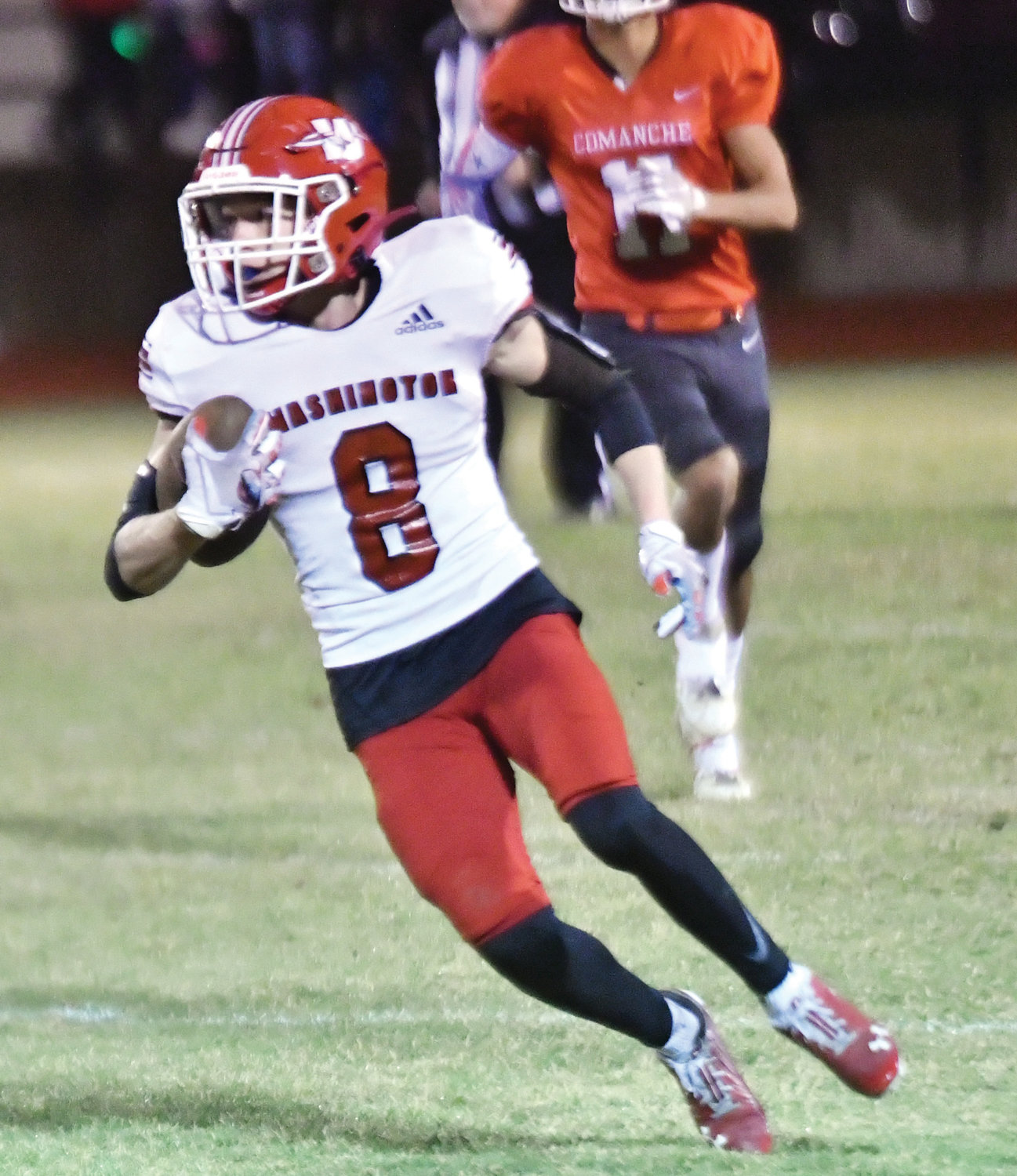 Washington’s Warriors continued their undefeated season with a thorough thrashing of Comanche, 55-6, on the road last Friday night.

The Warriors cruised to a 34-6 lead at halftime but it could have been worse.

A pair of fumbles cost the Warriors on two of their second period drives.

Scott got the scoring parade started in the first quarter on a five yard burst. Howard found the end zone twice in the opening frame frolicking in from 54 yards out and bursting in from the 11 yard line.

Ben Vaughn returned a kick 85 yards to start the second quarter scoring and Major Cantrell heated up in the passing department tossing a 50 yard scoring strike to Mason Singletary before halftime and finding Cage Morris twice in the third stanza on touchdown plays covering 20 and 54 yards.

Arthur closed out the Warrior scoring in the third period on a one yard run.

“Our three running backs all had success and they carried us early,” head coach Brad Beller said.

Scott led the attack gaining 88 yards on 14 carries. Howard chewed up 66 yards on just three carries while Arthur had six totes for 30 yards.

“Those three guys had the majority of our 223 yards rushing,” the coach said. “I felt like they held us together early. The two fumbles kept the score from being worse.”

Beller said all 168 of the Warriors’ passing yards came on the tail end of a 6-14 outing. Quarterback Major Cantrell completed five of his last six passes for all the yardage after a slow start.

“I felt like we started out slowly on both offense and defense,” Beller said.

Cage Morris snagged three of Cantrell’s aerials for 83 yards and a pair of touchdowns.

“He had a great night,” the coach said.

On the other side of the ball, Beller said it was a “complete team effort.”

“None of the individual tackle numbers will wow you,” he said. “But Tanner Olson, from his corner back position, fought all night long and had his first interception of the year. He also helped out with the run game making one tackle for loss.”

Defenders Hayden Milner and Naithen Spaulding had mirror games, both registering four tackles, three for losses and each having one quarterback sack.

“I can’t say enough about the play of Hayden and Naithen,” Beller said. “After a slow start defensively they did a great job of setting the tone and shutting down the interior and the Comanche rushing attack.”

Up next for the No. 1 ranked Warriors is a 7 p.m. homecoming date with the Little Axe Indians.

The homecoming and game was moved up a night due to severe weather predicted for Friday.

The coronation will begin at 6:30 p.m. tonight (Thursday) with the football game set to kick off at 7 .m.

Beller reports the Indians operate out of a spread formation on offense and are very multiple on defense.

“Their quarterback gets the ball out quickly to their receivers in space so we will have to do a good job of getting pressure on him as quickly as possible. They spread you out from sideline to sideline with their formations. We will need to stay hooked up and make sure we block until the whistle blows.

“Defensively they do a lot of really good things mixing up where the pressure is coming from. We will have to tackle well in space.”

Beller nominated Jordan Vanya as the Offensive Lineman of the Week. Vanya graded out at  83 percent last Friday night.

Tanner Olson was nominated as the Defensive Player of the Week. He finished with seven tackles including one for a loss and had an interception in the victory over Comanche.

The Defensive Lineman of the Week nomination went to Hayden Milner. He had four tackles with three of them behind the line of scrimmage and had an impressive six quarterback hurries.